Occasionally I write rude words and then don't delete them. There are two in this first review - please avoid if that's likely to offend. 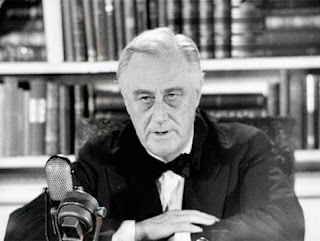 Capitalism: A Love Story (Michael Moore, 2009) is an important, immensely enlightening movie, even though it's hamstrung by Michael Moore's usual problems: a scattergun approach, a slight disingenuousness and an unfortunate propensity to exploit his subjects, even as he fights their corner.

The first half of the movie has some great things in it, but it's a mess, jumping from one idea to the next in a haphazard manner that suggests a stream of consciousness. It includes a gutting section showing families being turfed out of their houses, a hilarious if obvious juxtaposition of Presidents Carter and Reagan, a succession of revealing statistics about rising executive bonuses and spiralling foreclosures and an incongruous comic song about Cleveland. The highlights are an investigation of corporations benefiting from the deaths of employees that's chilling, if sometimes a little playful with the facts, and a focus on Citibank's notorious leaked memo in which they lamented the fact that the poorest 95 per cent of the country still had 95 per cent of the vote. The apparently indiscriminate jumble of scenes in this first hour is what the whole film would doubtless have looked like had the banking crisis not intervened, handing Moore a peerless example of exactly what's wrong with the current financial system. And what he does with that subject is great.

You can quibble with the filmmaker's cameraman zooming in for a greedy close-up of a sobbing child, or lampoon the frankly crap stunts that play second-fiddle to the main narrative here, but the portrait of the banks screwing the little people that dominates the film's second half is utterly superb: scrupulously researched and passionately presented. Beginning with some heavyhanded editorialising about banking terms like "derivatives" being used to hide dodgy practices - a point that's pretty poorly made - we quickly move onto the good stuff. Moore explains how Alan Greenspan and the U.S. Treasury encouraged Americans to obtain subprime mortgages, investigates Countrywide Financial's VIP loans programme and zeroes in magnificently on the bailout of major banks pushed through in 2008. Some of his revelations are just gobsmacking, like the FBI's estimate that 80 per cent of mortgage foreclosures during the financial meltdown were lender-induced. Moore also implies that Obama attracted widespread support because he was accused of being a socialist, which is clearly bollocks, but the last hour of this film is so sure-footed and insightful we'll let that slide.

As someone who studied history to degree level (I won't go as far as calling myself a "historian"), I found three backwards-looking segments of the film particularly rewarding. Moore holds up Dr. Jonas Salk - who discovered a vaccine for polio and gave the patent to the country - as a personal hero, and you can see why. When Salk explained away his utter selflessness by saying: "Could you patent the sun?", I burst into tears. I was at it again (and I don't regard myself as someone who cries that easily) when Moore recounted Franklin D. Roosevelt's decision to send in the National Guard in support of striking workers in 1936 Flint, before the director utilised extraordinary footage - long-thought lost - of the greatest President of the 20th Century unveiling his plans for a Second Bill of Rights. The proposals, identified by Karel Vasak as representing the 'second generation' of human rights, would have guaranteed all Americans "a useful job, a decent home, adequate health care, and a good education".

I would question whether Moore is really railing against capitalism itself, or just the model favoured in the US and Britain since the late-'70s. He frames the debate in terms that suggest a socialist government would be incompatible with capitalist society. That's obviously not true - take a look at Attlee's administration in Britain. What the director is actually questioning is a system of largely unregulated capitalism; bowing to the free market. Though a form of capitalism, it's an economically liberal strain, known as "monetarism" or "Thatcherism". Self-defeating to the last, Moore also keeps suggesting that America needs a revolution - nice way to scare the shit out of anybody who might think you've got a point, Michael.

Despite its obvious shortcomings, though, Capitalism: A Love Story is an important, even landmark work. That's because the subject is so crucial, the movie so timely and the high-spots so damn high. (3.5) 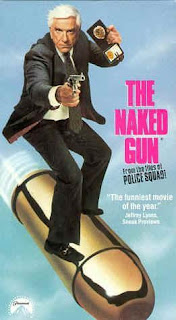 The Naked Gun: From the Files of Police Squad! (David Zucker, 1988) - Bad joke. Bad joke. Worse joke. Bad joke. Good joke. Great joke. Great joke. Bad joke. Worse joke. And repeat. That's the template for this admirably relentless collection of spoof gags and non-sequiturs (I know it says non-sequiturs on Wikipedia, but I thought of it first, honest I did), which rose from the ashes of cancelled TV show Police Squad. Leslie Nielsen is Frank Drebin, the incompetent cop trying to thwart the assassination of the Queen, who's on a state visit to L.A. Ricardo Montalbian - a leading man for Esther Williams in his early days - is the crimelord, while George Kennedy plays Nielsen's sidekick. We begin with a particularly unfunny fight scene, but the film soon gets into its stride via a hilarious credits sequence and O.J. Simpson's slapstick dunking, before reaching a peak around the midway point, with Nielsen's dressing down by the mayor, the dockyard shoot-out ("I can't hear you! Don't fire the gun while you're talking!") and the banquet stop-and-search. The film draws on slapstick, satire and spoofery to similarly variable ends, aided by a cast that's ever-game, if only as good as the material. As I've said before, spoofing is generally the preserve of the lazy, but at least Zucker and co are selective, and largely parody deserving targets. (2.5)
Posted by Rick Burin at 14:38