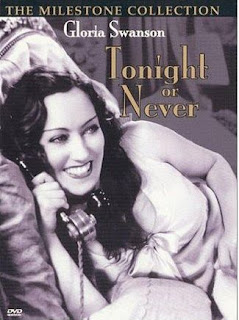 Tonight or Never (Mervyn LeRoy, 1931) was the early talkie that brought stage and screen legend Melvyn Douglas from Broadway to Hollywood. Viewed through the prism of history, it's also a chance to see Sunset Blvd. (see #76) titan Gloria Swanson as a conventional leading lady, blessed with talent, charm and an impressive modernity. Though her character in the Wilder classic is a silent star who was thrown on the scrapheap when the movies learned to talk, the real-life Swanson actually made the transition more easily than most, winning the Best Actress Oscar for The Trespasser in 1929. It was age, rather than sound, that ultimately derailed her career. Here Swanson plays an opera singer whose performances are technically proficient but ultimately cold, leaving her way short of international success. The problem, her coach tells her, is that she's never been in love. So she concocts an affair with admirer and possible gigolo Douglas, hoping it will spark her into life. The film is less escapist and more challenging than later variations on the subject, with a script that's sometimes witty and sporadically insightful, though it does betray its stage origins in the simplistic structure and largely internal settings.

The main draw here, along with the pre-Code shenanigans, is the acting. Swanson is invigoratingly natural as she shrugs, winces and flirts her way through the movie, matched by Douglas, whose familiar man-about-town persona is undercut by a danger and brusqueness that's completely new. Support is provided by Alison Skipworth (who played the Sidney Greenstreet role in the screwball version of The Maltese Falcon, Satan Met a Lady), along with Broadway cast members Ferdinand Gottschalk, eternal butler Robert Greig, Greta Meyer and Warburton Gamble. Boris Karloff appears as a hotel employee who slyly warns Douglas of Swanson's imminent arrival in his room, while the radio announcer is an uncredited J. Carroll Naish! A further boon for classic film buffs is the photography from Citizen Kane cinematographer and Samuel Goldwyn alumnus Gregg Toland. Though he's not working at full pelt here, his silver-tinged, superbly-contrasted images give a little taster of just what Toland was capable of. And just to show that there's something for everyone here (except perhaps football supporters and Ted Danson afficionados), fans of vintage fashion should get a kick out of the striking costumes, designed by Coco Chanel.

Tonight or Never was passed with cuts before the Hays Code clampdown of 1934, then subsequently refused for re-release in 1935 and 1937. Lamar Trotti, later a Fox executive and a superb screenwriter on films including John Ford's Judge Priest and Young Mr Lincoln, was at that time working for the Hays Office and said censors had found the key seduction sequence particularly offensive. And you can see why. It wasn't until the gradual lifting of restrictions in the early '50s that a woman could waltz into a man's flat, accuse him of being a gigolo and then insist he have sex with her - albeit in elliptical terms. And even if the symbolism and language appear very dated today, the subject matter is the sort that would be off-limit for most of the next 20 years, so it's fascinating to see it peddled by a leading man so associated with simple, romantic Golden Era fare as Douglas. An earlier scene, sadly truncated by the censors, depicts Swanson lying on her bed, listening crossly to the honeymooners next door. Apparently the original cut had her writhing around excitedly as they set about consummating their marriage. There's a scene as bold as that in the Hungarian film Extase, featuring a young, decidedly naked Hedi Lamarr, but I can't think of one in contemporary American film.

Tonight or Never isn't a Pre-Code classic to rank with say, Little Caesar or Counsellor-at-Law, but it's a very watchable film and intriguing for both its sensuality - check out the leads' first kiss or Swanson's nightwear - and the meeting of two great stars heading in opposite directions. (3)
Posted by Rick Burin at 14:39