Sometimes my life is really nice. 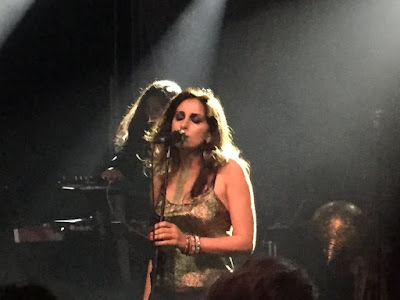 Yasmine's presence – and sound – simply grabbed me by the throat when I first saw her live in 2014, though she delivered a different sort of show the following year: more muted and relaxed, the last of her lengthy Ya Nass tour. Here she's rediscovered her range – a range that simply doesn't transmit on her records, which are exotic and evocative but hardly arresting – the grungier sections rising into a cacophonous racket topped by her overpowering, startlingly committed vocals. At other times she's flirtatious, plaintive, erotic. "You didn't tell me she was sexy," challenged my friend Jess, when Yasmine walked on barefoot and launched into the first number, breaking into a slow grind.

Most of the dozen or so songs (she doesn't play long shows) are from her new record, Al Jamirat, which isn't the departure from Ya Nass she had promised or envisaged, at least musically (as she sings in Arabic, doesn't publish her lyrics and has dispensed with contextualising her songs live at all, themes are harder to discern), but then I don't think it needs to be. She has already cut out a unique place for herself, and exploring it gradually: brushing away the sand and gently splitting the concrete, sounds as worthwhile as just wandering off elsewhere. She does do two numbers from that 2013 record, though: 'Hal' (her best-known song in the West, due to its appearance in Jim Jarmusch's risible vampire film, Only Lovers Left Alive) and the beautiful 'Beirut', that breathtaking paean to her home city. The other old track is one I can't find on any record, but which she's done live each time I've seen her: Hamdan toying with the audience, and her own persona, as she plays both a lustful scoundrel and the nervous young virgin he's trying to bring back to his tent.

The night wasn't a total success, Yasmine has forgotten who I am, an annoying adorable new couple kept getting in the way, and we suffered the worst audience farts since the Manics at the Roundhouse in 2014, but Hamdan can't be held accountable for any of that (except the first bit, which is dreadful – I am highly memorable, if only memorably irritating), and in this spellbinding show she showed why she's one of the best live acts on the planet, intoxicating us with her mega-watt charisma, and drowning us in that extraordinary sound. (4) 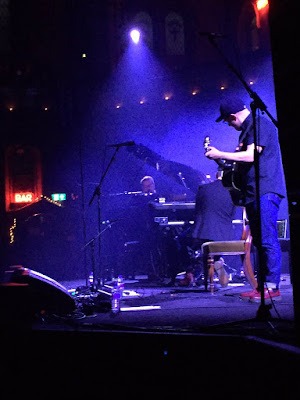 A mesmeric evening in the company of electro-balladeer John Grant, who staged this one-off show in one of Britain’s most distinctive, beautiful venues to raise money for his Russian mate Oleg’s kidney transplant.

It was a proper fans’ gig, with no sign of his signature tune, 'GMF', but rare airings of 'Magma Arrives' (the first since 2015) and a pair of my favourites: the elegantly foul-mouthed, cataclysmic slump into depression that is 'You Don’t Have To' – with Grant delivering a vocal that rendered him lost and bewildered, offset by sonic squalls and squelches via the synth – and 'Global Warming', a piece of subtly, seductively rhythmic self-mockery that moves like a rap record, its passages of blissful audial catharsis at odds with the alarm of approaching Armageddon papered over with lust and vanity.

Other highlights included the title track of his most recent album – 'Grey Tickles, Black Pressure' – now a reliable blast of baritone misery – a thawing then roaring 'Where Dreams Go to Die' (of the 16 songs he plays, half are from his first solo record), and the greatest 'Glacier' I’ve ever heard (and I’ve now heard it live three times, and perhaps a dozen times elsewhere), Grant swaggering with intent, coalescing and convalescing with saw-player Mara Carlyle, and then ripping the lid of that unmatchable voice. It is, simply, great. (4)

See also: I saw John Grant at Hammersmith Apollo in 2015 (my second favourite show of the year), then at my office in 2016.

Thanks for reading.
Posted by Rick Burin at 17:18