REVIEW: Angel Olsen at the Roundhouse 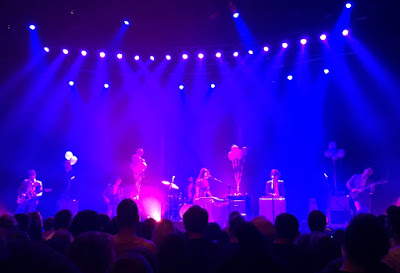 I thought the communality and specificity of a gig, coupled with a visit from teary-voiced alt-troubadour Angel Olsen was what we needed to heal the pain, but it all felt amiss. She got the tone wrong from the start. There was no reference to the victims in Manchester, no acknowledgement of how people were feeling, no ‘thank you for still coming out’ – though a lot of ticket-holders hadn’t turned up due to unease or fear or a feeling that a gig wasn’t where they wanted to be. In fact, Angel’s only veiled nod to the tragic events of Monday was that the world’s scariness “makes me realise what I have”, which is a commendable attitude but seemed myopic and self-centred, just as her banter with her guitarist came off as irritatingly trivial and irrelevant. 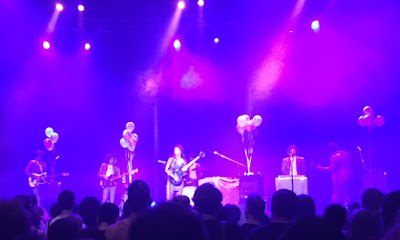 I appreciate that it can be hard to gauge the atmosphere in a foreign country, that my self-righteousness can be unbearable, and that one might not know quite how to navigate the aftermath of a tragedy, but for me the omission started to sour the experience, coupled with some more prosaic failings. For an hour this much-anticipated gig was largely a slog: the sound was muddy and Angel looked bored, not to mention confused by the dazed audience, who didn’t appear to want to be here (as I said, I was having second thoughts myself). There was no gentle balladeering to soothe the soul, or an opening blast of sound to wash the pain away: instead she started with a plodding, 10-minute version of ‘Heart-Shaped Face’, which is the worst idea an Angel’s had since getting kicked out of Heaven. 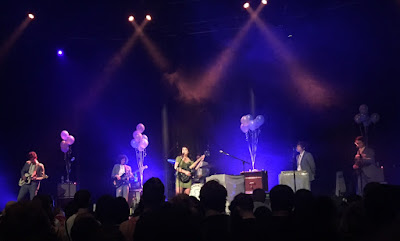 Angel has a fair stab at her most popular track, ‘Shut Up, Kiss Me’, murmuring “Well that’s out of the way” as soon as it’s over (partly in jest), lashes out the stabbing, relentless climax of ‘Not Gonna Kill You’ with real anguish and intent, and ends with a scintillating, sexy version of ‘Total Control’ by The Motels, sitting on the drum platform with legs apart as she delivers the vocal in this fabulously offhand, conversational but compelling way, then breaks out into a joyous keyboard duet with her backing vocalist. But the rest of it’s mostly monotonous, and Angel largely inert: standing out front with a guitar, occasionally sinking to her knees behind the keyboard stand when lead guitarist Paulie takes over (he’s an exceptional musician, and the star of the light blue-suited, string-tied backing band, who are ultimately more like an ensemble). The audience emit embarrassed lone whoops fading to nothing and, perhaps as a result, the set is flat, a disappointment… and such small portions too, wrapping up in just 55 minutes. 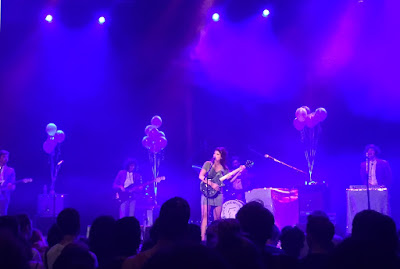 But then she’s back, for a five-song encore that just about drags it out of the bag. Angel’s alone on stage for a long, heartbreaking ’Lonely Universe’, before the band join her – backing vocalist first, the others quickly materialising – midway through ‘Unfucktheworld’, her signature song sounding stark and acidic and arresting. ‘Fly’ is mediocre, but next she breaks out ‘Tiniest Seed’ – my absolute favourite, from her 2012 debut – refashioned from a plaintive folk lament into a hard-edged, Nashville-tinged thing with echoes of Emmylou Harris (or Lucinda Williams with less throatily objectionable vocals). I enjoy that more than many, but everyone loves the closer: a sultry, exuberant ‘The Waiting’, Olsen walking around, mic-in-hand, bellowing: “I want to be the one who knows the best way.” It doesn’t seem like she does, quite, but on another day in another city I suppose this might all have worked. At least she got halfway there in the end. (2.5)

Absolutely terrible photographs by me. Thanks for reading.
Posted by Rick Burin at 17:20