REVIEW: An evening down the culture wars 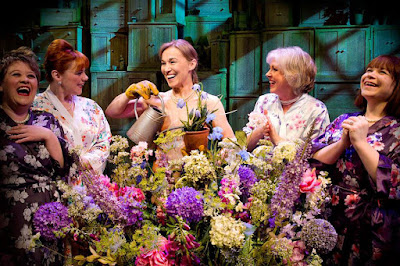 This is so, so Brexit. Gary Barlow’s musical version of Calendar Girls is fine-tuned to within an inch of its life, evoking a world and espousing a worldview that’s both seductive and abhorrent. It’s a hymn to a vanishing Britain – rural and nostalgic, where everyone knows everyone, and everyone is white – but it lacks the poetry or radicalism of the pastoral: it’s cloying and self-involved and almost context-free, lacking in proper principles beyond the ones you might find in the Conservative Party manifesto, and with a sense of community where there used to be a sense of society (cast member James Gaddas was a Tory PPC in 2005, so he should know all about it). The Girls is like Brassed Off for Leave voters: a safe, convivial, reassuring evening’s entertainment for people who look like the characters and think alcoholism is funny, and an ode to the crushing mediocrity rapidly consuming British culture, in both its music and its broad, blunt, saucy-seaside-postcard sense of humour. These characters aren’t really interested in politics, but they’ll vote Tory because they always have, and because you know where you stand with the Tories, and they’ve always done alright by us, and didn’t Corbyn say something about the IRA and wasn't that was dreadful, because I was around then and I remember what it was like. It’s a show of girl jobs and boy jobs, where hospitals should be paid for by charity, and the score is written by a tax avoider.

And yet, after 20 minutes of hating it, I began to come around, at least a little. From the moment that Claire Machin disappeared into her skirt for an exceptional piece of clowning on the knockout number ‘Who Wants a Silent Night?’, I started to forget that we’re in the middle of a culture war, and remembered that I was allowed to have a nice time, and a break from a hectic week at work. Having said that, the part of the show that really works is the hard part. The heartbreaking part. Torn from real life. Annie (Joanna Riding) loses her husband, Clarkey (Steve Giles) to cancer, and the play makes you feel the weight and the sorrow and the injustice of it. The way it's realised is very middle England, the lyrics evoking a world of duvets, margarine and Tesco trips that’s more Daily Mail than Ray Davies, but it's also moving and genuine and wonderfully played, with the two actors effortlessly stealing the show. That sincerity and emotion should, in principle, juxtapose perfectly with the humorous sequences that rub up alongside it. But they don’t. There are a handful of very funny moments, largely from Machin and young cast members Ben Hunter and Josh Benson, but most of the humour is really loud: inane, broad-brush joshing – the kind of thing you see on Loose Women or in an above-par Carry On… film, or when a hen party is on your train. 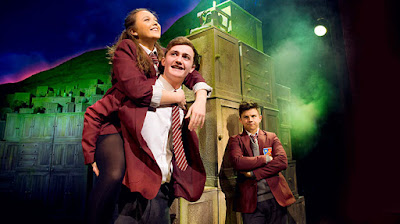 Chloe May Jackson, Ben Hunter and Josh Benson, the latter two providing many of the funny bits.

As you may know, Annie – encouraged by her free-spirited friend Chris (Claire Moore) – decides to make a nude calendar with her friends in the Women’s Institute, to raise money for a new sofa at the hospital where her husband died (I presume it hadn’t been replaced for several years due to 18 years of chronic underfunding of the health service by successive Tory governments). Along the way, they fight, squabble, banter and heal, while facing a cartoon baddie (Marion McLaughlin), assorted familial troubles and the personal demons of their WI friends. And we get a succession of Gary Barlow tunes – with pleasant if uninspired melodies, and wildly variable Tim Firth lyrics – before plot threads are tied and the cast take their clothes off behind pianos, flowers and currant buns, and the audience whoops and hollers, and a standing ovation breaks out. And in the end I kind of enjoyed it, because I like the theatre, and there were just about enough hummable songs and incidental funny bits, and Riding was very good, and her scenes with Clarkey stick in my mind because they brought a lump to my throat, and the second half was much more entertaining than the last act of King Lear at The Old Vic last year, which troubles me immensely. And though it’s set in a Paul Dacre wet dream of a small-town idyll, and the characters are cartoon Yorkshire people, and they’re the kind of cartoon Yorkshire people who actually exist, because they find the stereotype so alluring, and I’m going to have the burn the book to this show once the culture war hots up, it was a hell of a lot more enjoyable than I expected after those first, joyless 20 minutes, when I’d begun to question many of the life choices that had brought me to this point.

Having said all that, think how many hospital wings we could build if Gary Barlow just paid his taxes. (2.5)

Thanks for reading.
Posted by Rick Burin at 12:47