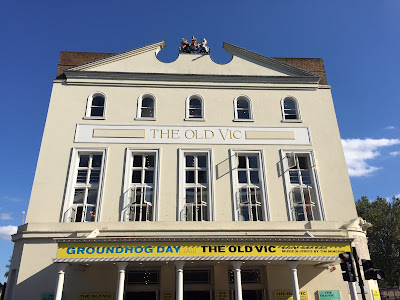 It's incredibly rare that an actor takes a role indelibly associated with someone else and makes it completely, and perhaps irrevocably, their own. But that's what's happened with Groundhog Day's Phil Connors in this musical adaptation of Harold Ramis's 1993 film, from the creative team behind the West End's Matilda. As realised by Broadway star Andy Karl − lent to the production under a special deal with American Equity − Connors is a comic whirlwind, powering a jawdropping production that's both a technical and an artistic triumph, using a rotating stage and several travelators, a song style fusing Lorenz Hart with hip hop, and an inspired broadening of its focus to wring every laugh, gasp and tear from the source material, and from its audience.

I can't remember the last time I enjoyed any play − or gig, film, perhaps even book − as much as Groundhog Day, an endlessly inventive production that's simultaneously thrilling as a theatrical achievement and as an uplifting and daring story of redemption. It's handsome, exuberant and magical, escapism with an undercurrent of melancholy and malaise, at times as chilly as its environs, at others as seductive as its snowscapes. The play changes a few things from the film through necessity - Phil now shoots his groundhog adversary, rather than driving him off a cliff; the build-up is chopped so that he no longer makes a disastrous impression on his producer, Rita, the day before departure; the presumably expensive 'I Got You Babe' no longer signals his continuing presence in Groundhog Day - and others through choice, notably inserting a funny but unnecessary scene in which Connors seeks various solutions to his problem (including an enema, alternative remedies and a lecture from a priest), as well as fleshing out four minor characters who previously just existed in Phil's story.

Insurance salesman Ned Ryerson, one-night-stand Nancy and the two hicks with whom Phil goes joyriding were largely just plot catalysts in the film, but here they're treated seriously and given both a spotlight and a song with which to share their innermost thoughts, fears and insecurities. Phil can't escape his own situation due to a quirk of the universe or an act of God, but for these people that sense of stasis is simply their life, and this musical builds on a single throwaway gag in the film to inject a sense of tragedy and far-sighted humanity that I found really powerful, especially in the hands of Tim Minchin, a gobsmackingly-talented songwriter and slightly tiresome atheism activist whose compositions here are truly extraordinary: gentle, humanist, desperately funny and always balancing the need to both be about these characters and possess a universality that makes them transcend above and endure beyond their immediate context. They also mirror the play's preoccupation with time, in both form and content, and Minchin has a great habit of wrapping up his songs in intensely dense, rhyming wordplay, fostering a sense of delayed gratification that means by the time he breaks the spell we're gagging for both melodic resolution and unequivocal lyrical expression. He can't help himself including a couple of slightly incongruous, heavy-handed jabs at religion, but I think we can let it slide. 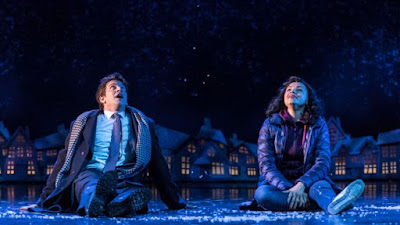 Another thing the play does brilliantly is interpreting Connors' shifts in mood and perspective − from confusion to depression to debauchery to frustrated calculation, heartfelt sensitivity and finally flowering self-worth − through the musical theatre medium. That means Karl's hilarious swagger as he realises his power (and his brilliant asides, like vindictively attacking a child with a snowball while simultaneously attempting to get inside Rita's pants), but also director Matthew Warchus's staging, in which the dancing, celebrating and guileless townfolk's performance, lighting and choreography reflects the character's worldview, appearing ominous, adorable or mere putty in his hands, depending entirely on Phil.

The rotating stage allows us to wake up again and again in his bed (sometimes contained in a tight set, sometimes spaced out, sometimes just alone on the vast expanse of the Old Vic stage), blackouts and quick set changes allow him to pursue Rita through trial and error, while − in one virtuosic scene rife with misdirection − he repeatedly kills himself, then pops up again at 6am, elsewhere on the stage.

Karl's physicality, amiability and superb comic timing are complemented by Carlyss Peer, a Holby City veteran who I was astonished to learn afterwards was making her musical theatre debut. Her intrinsic warmth and sensational voice, her fusion of sweetness and steel, and her articulation of the character's internal complexity − incorporating a subtle but radiant sensuality − sell you completely on Connors' desire to reform on her behalf, while the chemistry they create, ebbing and flowing as his character shuffles through the seven stages of responding to a perpetual Groundhog Day, is completely believable and utterly persuasive.

There are a couple of incidental shortcomings, I suppose − the song in which Phil considers both medical and spiritual solutions seems more like Minchin ticking off predictable enemies like the church and reiki practitioners than advancing the story or the characterisation, and there's one member of the ensemble I've seen before and am not a huge fan of (it seems unnecessary and churlish to name them) − but I found more to entertain and enrapture than in perhaps any production I've ever seen.

Before I moved to London in 2013, I'd never seen a West End play, and my knowledge and experience of theatre remains strictly limited, but this is comfortably in the top four productions I've ever been lucky enough to see (with The Book of Mormon, Skylight and A View from the Bridge), a creative triumph in which all those involved seem to be at the peak of their powers, and everything gels, an impression epitomised by a succession of remarkably intricate sequences utilising an arsenal of hardware, propelled by an apparently boundless sense of ambition, and realised in the most apparently effortless, exultant way.

The coup de grace is Karl's performance, a larger-than-life characterisation that distils Phil Connors' essence, and from that lifeblood creates a succession of unforgettable Phils, each flawlessly formed around a conspicuous imperfection, then given license to steal this incredible show, again and again and again.

Thanks for reading.
Posted by Rick Burin at 17:52