I've been to quite a lot of stuff in That London this year: 16 plays, 21 gigs, 19 other bits and bobs, so I thought I'd tell you about some of my favourites. The first part of my review of the year, dealing with movies, is here.

I saw some big names in some big plays in 2015: Ralph Fiennes in Bernard Shaw's Man and Superman, Benedict Cumberbatch in the rather disappointing Hamlet, and Kevin Spacey in Clarence Darrow, but my favourite six productions were these: 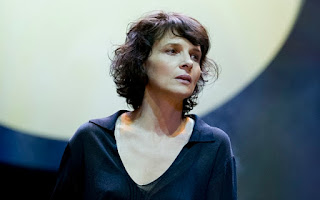 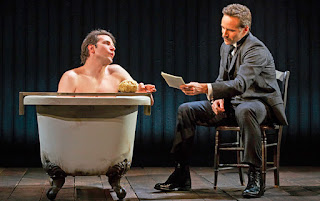 5. The Elephant Man (Theatre Royal Haymarket) - The production feels too short by a good 20 minutes and has no real dramatic climax, though it's illuminated by a superlative, all-American cast, particularly screen star Bradley Cooper, who made it big in that abhorrent, detestable slice of Fratwank, The Hangover, before revealing he could actually act the pants of most people in Hollywood, and makes for a simply sublime John Merrick. 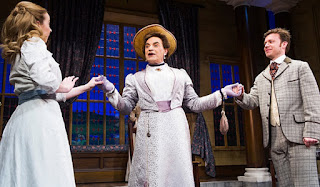 4. The Importance of Being Earnest (Vaudeville Theatre) - An unexpectedly hilarious, specific presentation of the Wilde play, with Suchet taking top billing, but a modern Algy (Philip Cumbus) and a vivacious Cecily (the superb Imogen Doel) taking top honours. Just a delight. 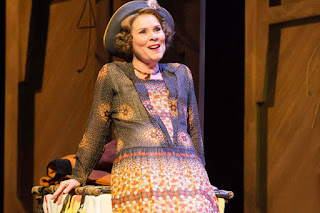 3. Gypsy (Savoy Theatre) - This is a fun, funny, intensely sad translation of Sondheim’s 1959 musical about the creation of striptease sensation Gypsy Rose Lee (Lara Pulver), focusing on her manager, Rose (Imelda Staunton), the ultimate stage mother. A work of real emotional heft, it starts off light and sweet and frothy, then takes us deep into the souls and psyches of its characters, peddling a little of Sondheim’s broad sordidness (which isn’t really my sort of thing but works alright), before flooring us with a succession of gut punches. Completely compelling even at two-and-a-half-hours, it’s a show shot through with wit, ugliness, angst, desperation, panache and pizzazz, from the stylised, skewed-perspective sets to a slew of stellar songs and Staunton’s sensational central performance, the best I've ever seen her give. 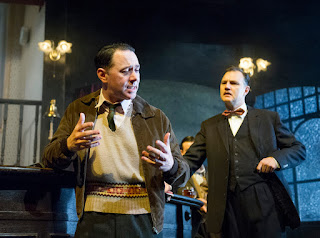 2. Hangmen (Royal Court Theatre) - In Bruges writer-director Martin McDonagh returned to the London stage with a killer new play about the country's second-best hangman (David Morrissey) - on the day that hanging is abolished. It's both perilously dark and astonishingly funny, McDonagh weaving together his comic and thriller-ish strands with utter majesty, as a mysterious blonde stranger appears in Morrissey's Oldham pub, setting in motion a truly grisly chain of events. After the partial misfire that was his Hollywood debut, Seven Psychopaths, this is a stunning, seamless return to form from one of the sharpest, wittiest and most interesting writers working today, a work so incredibly entertaining that it's only when the dust settles that you realise there was real meat on these bones. 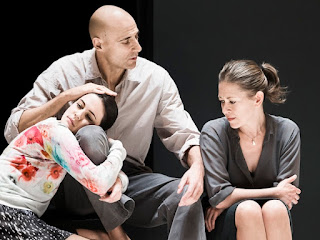 1. A View from the Bridge (Wyndham's Theatre) - Arthur Miller followed up The Crucible with another play dealing allegorically with the communist witchhunts: A View from the Bridge, a story of Freud and informing in which longshoreman Eddie Carbone (Mark Strong) is tempted to turn in an illegal immigrant for daring to romance the niece he idolises (Phoebe Fox). Ivo von Hove's production opts for minimal staging but maximum power, with a small, square, boxed-off set, scenes bleeding one into the next through intelligently-paced entrances, and a finale in which no-one is left untainted. The shaven-headed Strong, facial muscles twitching, disappears into his character entirely, inhabiting this tortured, conflicted Sicilian, polemicising endlessly, though whether to convince himself or others isn't clear. As the nymph whose sexual blossoming has set tragedy in motion, Phoebe Fox is also exceptional, with impeccable delivery and a sensuality that's careless, studied and insecure. This gobsmacking production, powered by two performances of exquisite clarity, nails both its specifics and its wider resonances, leaving you feeling exhausted, destroyed and yet curiously euphoric. 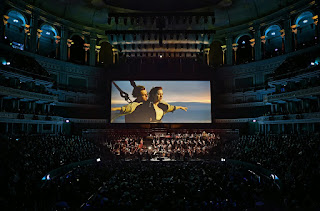 The best show I saw at work this year was Titanic Live, an experience that I wrote about here. Other highlights included Back to the Future - also a 'film and orchestra' presentation - gigs from Bob Dylan (twice), Van Morrison, The Who, Noel Gallagher, Art Garfunkel and particularly Dave Gilmour, and the Sherlock and Leonard Bernstein Proms. Because trying to put together a list of the best shows I've seen anywhere is either going to see me accused of bias or fired, I thought I'd tell you instead about my top SEVEN shows at other venues: a list so good that even a reformed Fleetwood Mac aren't in it. 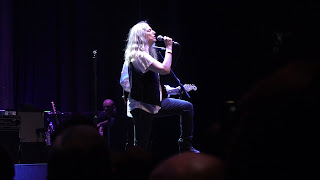 7. Patti Smith (The Roundhouse) - She did Horses. In its glorious entirety. I sat on the floor of the balcony, as I had sciatica, but even up there she blew me away, her voice a time machine, the songs as groundbreaking, fresh and immediate as ever they were. I've rarely seen any on stage with such quicksilver charisma.

6. Ennio Morricone: A Life in Music (Rival Venue) - The good, the only slightly less good and the rather obscure, Morricone's greatest hits set was a joy to behold. And I met Elizabeth McGovern in the interval, shortly after hearing her theme from Once Upon a Time in America. 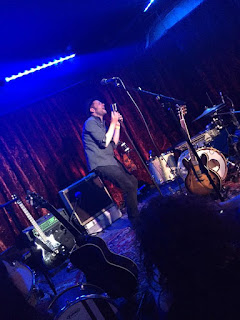 5. David Ford (Borderline) - This show converted me from a foolish sceptic to a die-hard fan (I was accompanied by wife, who thinks Ford is fantastic - which it turns out he is). His 'one man band' show, built on loops - with him playing every instrument - was powerful, poignant and eye-opening, revealing a songwriter and a performer of unusual potency. 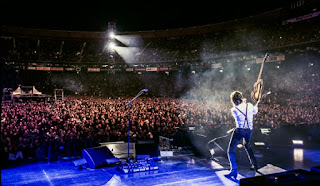 4. Paul McCartney (Rival Venue) - It didn't really occur to me that seeing McCartney live was still a thing you could do, though I listened to Trippin' the Live Fantastic pretty much on repeat when I was a kid. I got around to it this year and had a ball, courtesy of a two-and-a-half hour show packed with just about everything you could have asked for, but lit especially by Blackbird, I'm Looking Through You and the immortal Golden Slumbers. I'll always prefer Dylan, but his apparent contempt for his audience is particularly noticeable when contrasted with the waves of affection apparently emanating from McCartney. Odd, when you consider that the audience's biggest cheer of the night was for the fireworks in Live and Let Die - if you like fireworks that much, they actually do fireworks shows. 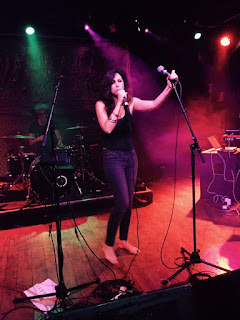 3. Yasmine Hamdan (Scala) - Last year's gig at the Hall's Elgar Room was an absolute revelation, so a year on I had to see her again. Hamdan's seductive, uncompromising manner, superb songs and ethereal but full-barrelled vocals make her live shows a unique experience, and she even remembered me. 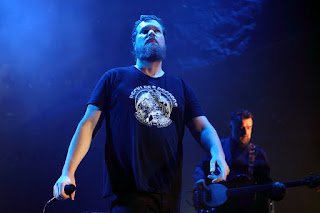 2. John Grant (Hammersmith Apollo) - This was a simply sensational show from one of this year's overriding obsessions, the incomparable John Grant. I've never known a run of songs at a show quite like Glacier/Queen of Denmark/GMF, while It Doesn't Matter to Him took the roof off the place: only now it's somehow triumphant, rather than blisteringly raw and acutely painful. His voice, his charm, his dancing - it was an extraordinary evening. He's at the Hall in June, actually, so hopefully I'll be seeing him again soon. 1. Basia Bulat (The Slaughtered Lamb) - An evening of perfectly vocalised folk from a distinctive and remarkable singer-songwriter: blissful and heartbreaking in turn, and exultant in its quiet majesty. I still don't know what the opening song was (it possesses the pressing, tempting refrain, "Won't you let me in?" and may be on her upcoming record). The audience wouldn't let her quit playing, so when she finally left, it was because she'd run out of songs. You have to see her live. 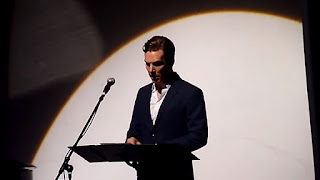 I saw four comedy shows, of which Bridget Christie and Stewart Lee's were the undoubted pick, both fusing silliness, satire and social comment to astounding, uproarious effect. I saw Q&As with Al Pacino, Ryan Gosling, Steve Coogan and Armando Iannucci, the cast and crew of Vera Drake, and several key players in Sense and Sensibility - the latter was one of the best things I went to this year, and I learned a lot. The Spectre premiere, I've discussed already, but that was very special indeed. And my wife organised a knock-out event at Westminster's Central Hall to 'Bring Back the NHS', starring Ian McKellen and Charlotte Church. 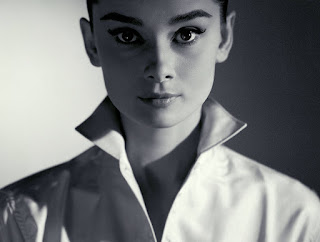 At the Hall, I saw Sondheim's rarely-staged Follies in Concert, Cirque du Soleil's often jaw-dropping Kooza and a pre-show talk at Interstellar Live that featured Christopher Nolan, Hans Zimmer and Prof Brian Cox, and my nearest cinema - the Tricycle Theatre in Kilburn, north-west London - brought hit plays to the screen, including Maxine Peake as Hamlet (very good) and Benedict Cumberbatch and Jonny Lee Miller in Frankenstein (not at all good). Compared to last year, when I went positively exhibition-crazy, I saw only the National Portrait Gallery's Audrey Hepburn one, and a Venetian drawing special at Oxford's Ashmolean.

The best of the grabbag of oddities enjoyed this year, though, was the superb Letters Live, which brought to life the seminal Letters of Note book. "Have you ever had a dream about a show and wished it could really have happened?" I asked. You can find out the answer here.

Thanks for reading.
Posted by Rick Burin at 07:48