Cate Blanchett, The Force Awakens and, actually, that's about all - Reviews #221

A couple of new films. One of them's Star Wars. My next three posts will together make up my review of the year. Yes, I thought you'd be excited about that. 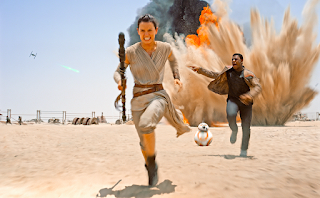 *ONLY VERY MINOR SPOILERS, BUT DO NOT READ IT UNLESS YOU'VE SEEN IT. WHY WOULD YOU?*
Star Wars: The Force Awakens (J. J. Abrams, 2015) - Well, J. J. Abrams certainly seems to understand what Star Wars fans want more than George Lucas does, because The Force Awakens is fun - and there's not a discussion of international trade tariffs in sight. Of course, it's only a proportion of Star Wars fans who actually want fun, lots of them want to be 12 years old and for it to be 1977, and are taking out their frustrations on this film. It's for that reason that I'm a little reticent to add yet more words to the incalculable number already written about the movie, whether citing fictional plot-holes (actually just unresolved storylines leading nicely into the next film), whooping uncontrollably or suggesting that George Lucas is likely to be spinning in his mansion. But then I thought: fuck it, it can't be any worse than most of the reviews on IMDb.

The film that's called most to mind by The Force Awakens, perhaps even more than Star Wars (or A New Hope, as we now apparently have to call it), is the Veronica Mars movie that was Kickstarted into existence last year. Though it was catering for a rather smaller demographic and came just eight years after the previous instalment, it also sought to pay loving homage to its original series, while setting in motion a new story. And though its affectionate in-jokes and its handling of its mythology and iconography were very assured, it had a little difficulty meshing its backward-looking fan gratification with the present day narrative. That's also true of The Force Awakens. But for fans, isn't that chumminess, that insider feel, allied to the novelty of new characters on a similar odyssey exactly what you want?

I am going to keep spoilers to an absolute minimum here, as with this one - more than any other film in recent memory - it's best to go in completely blind (don't worry, that's not a dig at Abrams' lens-flare festish, which I didn't see one example of here). But I will map out, in vaguest terms, the beginning of the story, in which a Resistance pilot (Oscar Isaac) gives a map containing the whereabouts of missing Jedi master Luke Skywalker (Mark Hamill) to his droid, shortly before being captured by tantrum-y Sith trainee Kylo Ren (Adam Driver). The droid vamooses, falling by happenstance into the hands of scavenger Rey (Daisy Ridley) and the mystery man who just crash-landed in her back yard: fugitive Stormtrooper, Finn (John Boyega off of Attack the Block). Then fate slings the trio into the path of one Han Solo (Harrison Ford) and his furball sidekick, Chewbacca (Peter Mayhew).

I really liked it. The film moves at a breakneck speed and delightfully jettisons the horrible, talky, po-faced nature of the prequels, injecting a heavy dose of humour and irony into proceedings. There's a sense of fun, of humour, of energy that I found really charming, and though it does have some rather obvious shortcomings, it's probably as good as Return of the Jedi, and parsecs ahead of the restrictive, boring, numbingly fatalistic films that Lucas has inflicted upon us since then. The main characters are perhaps a little self-consciously box-ticky, but in a way that I don't mind, because a black kid and a kick-ass, self-sufficient woman are still such a novelty as blockbuster heroes, and twisting the story to put those positive characters up on the screen is OK with me.

I also loved Adam Driver's performance; it's easy to be disingenuous about his character, but its inversion of the series' mythos is such a smart, simple idea that I hope Kasdan and his writers took the day off after coming up with it. I made the mistake of reading the IMDb reviews and the lack of logic there was quite distressing. Of course Vader was terrifying because he was so cool and calm, and Rey's explosions of callow rage are less chilling, but that is precisely the point of the character - and why go where we've already been? Isn't that exactly what the same fans are moaning about whenever the film looks like it's shadowing A New Hope? The decisions that it makes about his mask, his keepsakes, his ultimate destiny are absolutely spot on and create many of the film's best moments. As someone who's only seen Driver in Frances Ha - where he's a monotonous bore who can barely read his lines - and Baumbach's floppy follow-up, While We're Young, I was expecting him to be a weak link, but he's really the film's strong suit. In support, Oscar Isaac - as the extremely sexy fighter pilot Poe Dameron - and Ford have easily the best of it, along with Chewie, who's used largely for comic relief. Debuting droid BB-8 was fun too, if perhaps a little on the cutesy side.

Boyega, for his part, shows little of the dynamism he exhibited in my favourite film of 2011, Attack the Block, a movie that rests largely on his shoulders, but he is completely credible. Sadly the same can't be said of Ridley. Her character is extremely well-defined and does everything you want it to, but Ridley herself is distractingly poor, with wooden gestures, almost no emotional register and an inability to inject her dialogue with anything approaching sincerity. Less damagingly, but still annoyingly, the film is also saddled with several weak supporting characters: a crap CGI villain (Andy Serkis) seen periodically, who resembles various villains from the Hobbit films, Lupita Nyong'o's Maz Kanata - another computer creation, this time so inept she makes Bib Fortuna look like Gollum - and the various henchmen of the First Order (that's the new name of the re-emerging Empire forces), who in perhaps unwitting tribute to the original films are played by English people acting really poorly. And then there is Carrie Fisher, who I'm sure is doing her best, but I mean, really...

Those aren't the only flaws. For a film so hyped, so anticipated and so long in gestation, it doesn't seem quite finished. It's oddly disjointed at times, and the action sequences are inconsistent: thrilling and imaginative one minute, staid and formulaic the next.

But overall it does deliver. For great portions of the movie, I just had a big grin plastered across my face. It gets Star Wars, it really does. It knows how much we love the original trilogy, and it loves it too. That affection, evidenced by a million tiny touches, doesn't always blend seamlessly with the new narrative, but it does underpin and underscore everything that happens, creating an almost unheard of noise in the cinema (as well as the gasps and cheers): the wry, affectionate, fond chuckle of recognition, as another piece of folklore drifts into the story of these two young loners on an apparently impossible mission.

Is it as good as The Empire Strikes Back?

No, but how many films are?

The Force Awakens is hugely entertaining for the most part, and packs a powerful punch, along with a dozen great jokes and a handful of characters in the honourable tradition of the ass-kicking, stereotype-defying Princess Leia. And with Driver doing something new as Kylo Ren, and Ford in delightfully craggy (and unusually committed) form as Han, I'm really struggling to see how a Star Wars fan wouldn't like it. You know, unless they were trying really hard. For my part, I wasn't sure if Abrams could pull this off. I'm not a huge fan of his work, which tends to be derivative in the extreme. But here it seems to hit on something different, or perhaps that approach simply works in this context. While never skimping on the speed of the story, it's knowing, endearing and fuzzily nostalgic.

How can you not love a Star Wars movie where Rey's house is that? (3) 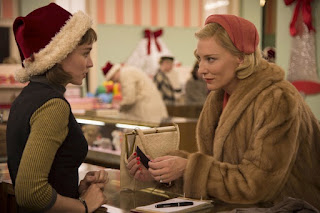 CINEMA: Carol (Todd Haynes, 2015) - A small miracle of a film, about a quiet, emotionally straightforward shopgirl (Rooney Mara) - on the cusp of self-revelation - who falls in love with a middle-aged housewife (Cate Blanchett), herself careening towards divorce.

In 2002, writer-director Todd Haynes made the inspired, delightfully-mannered Far From Heaven, an experiment in which he created a melodrama in the singular style of '50s 'woman's picture' specialist Douglas Sirk, but dealing with subjects that were decidedly off-limits during the postwar years, like adultery or being a gay.

Here, he casts off the cloak of pastiche to revisit the era, creating a blissfully textured, stunningly authentic and seductively realistic portrait of love busting up through the floorboards of stifling conformity. From the bright, rosy, toy store interiors of a New York Christmas to smoky, wood-panelled hotel bars; from a taxi cab dripping in the evening rain to the identikit plastic kitchens of drab, repressive suburbanity, he and cinematographer Edward Lachman capture a very definite sort of Americana: a period of emotional torture and really rather terrific clothes.

Both Blanchett and Mara are superb: there isn't a false note from either of them throughout. It'd be easy for them to go for the big, grandstanding, melodramatic, Oscar-ogling performance, but it'd also be completely artificial. Instead, they just play the characters: with the certainty, the conflicted nature and above all the restraint that's required. Blanchett, with her vivid scarlet lips, is fierce, urbane, sad; the round-faced Mara sweet, deceptively steely and head-over-heels, but with her eyes prised wide open. Those aren't those characters' only facets, though: these are living, breathing creations who act like ordinary people, facing a less than ordinary dilemma. In support, Kyle Chandler is excellent as Blanchett's husband, but he isn't Blanchett-and-Mara excellent.

Perhaps the film's most unexpected virtue, though, is the stunning use of sound, which in turn bewitches, beguiles and disorientates, filtering its period tunes through eerie soundscapes to complement - but never replace or compensate for - the character's inner lives.

The rest is just sheer perfection. If you haven't seen it, and you like either films or love, you should go before it leaves your nearest poncy cinema. How many other small miracles are you likely to find there? (4)

Thanks for reading.
Posted by Rick Burin at 16:44