The latest in a semi-regular series... 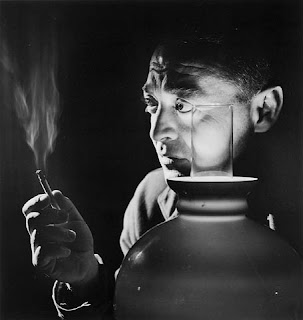 Peter Lorre, that strange, strangely beautiful, intensely and minutely expressive actor is one of the most recognisable and most imitated figures in movie history, and the master of the dual-layered characterisation comprising conflicting but complementary parts. But I could never quite get a handle on his life. How was he a star in Germany, then just a bit-part player in America? What was the story behind Der Verlorene, his sole film as director, which took him back to the ruins of his adopted country for barely a year? And why and how did his star fall so low that by the end of his career he was reduced to gag cameos in instantly outdated trash? I wanted to know the answers, so I bought The Lost One – A Life of Peter Lorre, by all accounts the definitive work on his life.

And it is impressive. It’s staggeringly well-researched, featuring more than 300 interviews with the great and good of German and American cinema, delving into the lives of his contemporaries, fleshing out the historical context of the societies in which he lives, and digging out all manner of details from registries, letters and archive newspapers. And yet somehow it never quite gets to the heart of Lorre, leaping about from one aspect of his life to another, never quite joining the dots or reconciling the contradictions in this happy, interested, disinterested, sad, tragic, playful, ruined, unhealthy, trim, stout, deceitful, selfish, generous, lazy, obsessive man, and getting sidetracked by its subplots at the expense of the main attraction.

Its central argument, committedly if rather blinkeredly put, is that the mercurial, pint-sized Austrian acting dynamo was a sleeping giant who never came close to achieving his mammoth potential, through a mixture of human weakness and morphine addiction. It is not a non-stop chucklefest (nor indeed a breezy, page-turner). Biographer Stephen D. Youngkin is almost universally dismissive of Lorre’s screen work, seeing only M, The Maltese Falcon and The Lost One as worthwhile movies*, the rest merely variable Hollywood fodder occasionally enlightened by his slumming presence, but barely meriting a mention. Indeed, the author spends far longer on a minute discussion of his comrade-in-arms Bertolt Brecht’s unhappy time in America than he does on discussing, say, Lorre’s supporting pyrotechnics in mass market successes like My Favourite Brunette – where the actor was like, you know, acting.

It’s a heavy book, in both senses of the word: 453 pages (excluding the copious notes) of big pages with small type, packed to the gills with extraneous information, but also some gems. I thought I’d share those with you here: 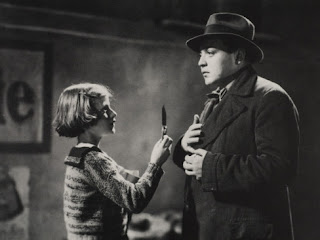 1. You know how to whistle, don’t you?
His eerie, tuneless whistling of the Hall of the Mountain King, in his still-stunning second movie, M (Fritz Lang, 1931), was done in post-production, as he’d never learned to whistle, so couldn’t do it on cue. Lang’s sadistic treatment of his star included forcing Lorre to be kicked in the shin with a nailed boot, then re-taking the close-up at least 12 times. But he got what he wanted – Youngkin says that the French version of the film, starring Lorre but apparently not overseen by the director – is a pale imitation of the original, with the actor notably overdoing his part. 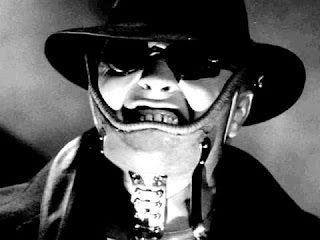 Not Crime and Punishment.
2. You’ve got a Freund
Lorre only agreed to feature in the horror film Mad Love (Karl Freund, 1935) if his new studio, Columbia, would also produce an adaptation of Dostoyevsky’s Crime and Punishment, starring him as Raskolnikov. Unsurprisingly, Mad Love was a sensation – earning him a reputation as an unparalleled screen menace – while the literary epic was dead on arrival. 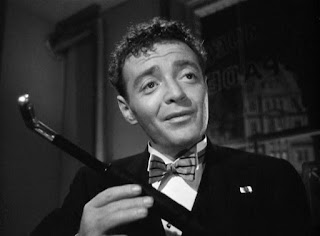 3. Elisha Cock, Jr
Censor Joseph Breen objected to Lorre’s depiction of the “pansy” Joel Cairo in the seminal Maltese Falcon (John Huston, 1941) and demanded cuts to scenes in which he cuddled the gunsel, Wilmer (Elisha Cook, Jr), and stroked his face. Cairo’s gardenia-scented calling card and habit of brushing the phallic handle of his umbrella across his lips eluded Breen to form part of an indelible characterisation. 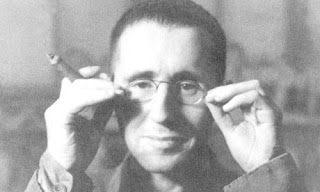 4. The way it crumbles, cookie-wise
Lorre was a key influence on Bertolt Brecht, who studied the performer’s style while formulating his theories about acting. Their last public collaboration was in 1931’s Mann Ist Mann, on the Berlin stage, but they also worked together on several unrealised film projects, including a 1945 story called Lady Macbeth of the Yards. This project, updating Shakespeare to the Chicago stockyards, would have seen steer cutter John Machacek – advised to “be bold” by a fortune cookie – murdering his way to... not a kingdom, but a little market specialising in choice meats. Replete with surrealistic touches, such as a singing witch, a mirror maze and nightmare sequences featuring “a distant rumble growing into thunder, and a cloud of dust… kicked up by the hooves of an oncoming herd of steers”, it had the potential to be a classic film noir. Warner’s story editor kiboshed it at the last. 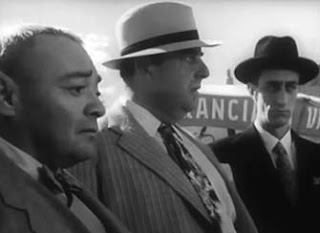 5. Morley repugnant
Robert Morley, in conversation with the author, said of his Beat the Devil co-star: “I have always thought him an intensely tiresome little chap, with quite the foulest vocabulary I have ever had the misfortune to listen to.” 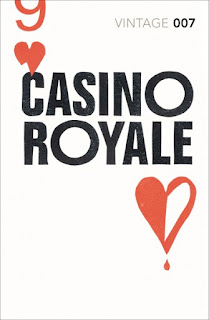 6. A Royale with cheese
Though Lorre is a standard pub quiz answer, as the first person to play a Bond villain (he was Le Chiffre in a 1956 TV version of Casino Royale), his death scene didn’t go entirely to plan. According to screenwriter Charles Bennett: “Peter expired as the camera sent the show across the nation live. But then, the director failed to push the right button, and instead of this scene jumping to the next, the cameras remained on ‘dead’ Peter. Rightfully concluding that his job was done, he rose and quietly departed to his dressing room, smiling whimsically, to the utter bewilderment of possible thirty million viewers.” He was shot dead, again, in the next scene. 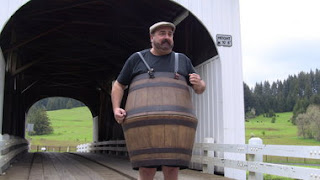 7. A barrel of laughs
The strain of applying his genius to substandard roles did occasionally rile Lorre outwardly. Ellis St. Joseph updated The Amazing Dr. Clitterhouse (a great title, I’m sure you’ll agree) for a 1957 episode of the Climax! show (I’m not lying). Fishing for a compliment, he told Lorre: “I’m grateful you accepted it. What did you think?” Lorre admitted he hadn’t read it. “When you are asked to jump into a barrel of shit,” he added, “you don’t ask if it’s feet first or head first.” 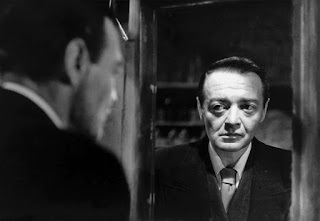 8. Hallelujah, it’s a bum
Lorre returned to his adopted country of Germany in 1951 – 20 years after M, and 18 years after fleeing Hitler’s stormtroopers – to direct his first film, Der Verlorene (The Lost One). His unorthodox audition technique included asking Gisela Trowe to wiggle her bum and spending three days creeping out Lotte Rausch, in character. The film created the peerlessly eerie word “Totmacher!” (“death maker!”). In fact, Lorre was no stranger to inventing words, his singular vocabulary comprised of heptalk and neologisms, including the multi-purpose “kreep”, a favourite of the many impressionists to whom he inadvertently gave a living. The film divided critics, who bristled at the morphine-addled director’s confrontational approach to the issue complicity in Nazism, and never found an audience. When Lorre went back to America the following February, he made the coolest packing list of all time: a toothbrush, a razor, a washcloth and a 35mm print of Der Verlorene.

Lorre dancing. One of the best things ever in a movie.
9. Stocking filler
Fans of benign Hollywood anecdotes might like to know that Lorre, Joseph Buloff and Jules Munshin spent two weeks of the Silk Stockings shoot arranging an elaborate practical joke on Rouben Mamoulian – a huge Lorre fan who had rehabilitated many typecast performers from Guy Kibbee to Myrna Loy and Fredric March, and cast the 53-year-old actor in a delightful comic role for this remake of Ninotchka. At a cost of $10,000, approved by studio chief Louis B. Mayer, the trio’s first filmed take of the 'Too Bad (We Can't Go Back to Moscow)' number was a re-written version that began: “When you’re working for Mamoulian, it’s like working for Napoleon.” At the end of the shoot, they presented him with the film, as well as a transcript of the lyrics. Speaking of Napoleon, Lorre's first theatrical ambition was to embody the Little General. The closest he ever got was shooting publicity stills for a 1937 play that fell apart before rehearsal.

10. Ranting and Raven
He improvised most of his dialogue in the 1963 Roger Corman comedy-horror, The Raven, including this memorable opening exchange:
Vincent Price: “Shall I ever hold again that radiant maiden whom the angels call Lenore?”
Lorre: “How the hell should I know? What am I, a fortune teller?” 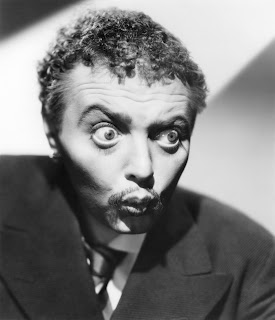