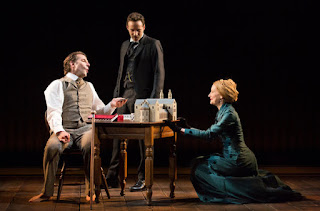 The Elephant Man (Theatre Royal Haymarket) - This adaptation of Bernard Pomerance's play (also the basis for the exceptional 1980 film) is fantastic as far as it goes, but it doesn't go quite far enough.

The production feels too short by a good 20 minutes and has no real dramatic climax, though it's illuminated by a superlative, all-American cast, particularly screen star Bradley Cooper, who made it big in that abhorrent, detestable slice of Fratwank, The Hangover, before revealing he could actually act the pants of most people in Hollywood, and makes for a simply sublime John Merrick. Eschewing prosthetics, he instead walks on stage as the pin-up he is, before responding to a doctor's coldly clinical analysis of his character's physique by contorting his award-winning body (People Magazine's Sexiest Man of 2011) into the curious curves of the Elephant Man, just as his voice then leans on gasps and gulps, and his personality bends to draw out Merrick's good humour, irony and inherent tortured melancholia.

In what is more of an ensemble piece than you may expect, veteran indie darling Patricia Clarkson goes for some big American moments, angling for the loudest kind of quiet pathos imaginable, as she wields the silence between words like a sledgehammer, but she's certainly commanding playing a world-weary diva shaken to sentiment by her encounter with true goodness. The other really notable performance here, though - indeed, the only person on the Theatre Royal stage who can live with Cooper in this kind of form, in this kind of scene-nabbing role - is Alessandro Nivola, absolutely excellent as doctor Frederick Treves, a character whose descent from arrogant, ambitious physician to largely broken man wielding a few choice observations about the human race is chilling, if not dramatically complete.

The acting is complemented by inventive though not groundbreaking stagecraft, into which so much thought has clearly gone that at times the production slightly undermines itself (the odd if arresting scene in which Cooper contrasts the standard human form with Merrick's distorted body requires that he act from behind a curtain prior to that). It's a hot ticket, though, and it deserves to be, not just for the big names from the big screen - which have brought a crackling excitement to Haymarket - but for the quality of the acting, Pomerance's familiar, erratic but sometimes beautifully modulated observations, and a basic story that retains its ability to appal, amuse, confound and move.

If it has a problem, it's that it never quite comes to the boil. The problem, perhaps is that Pomerance's thesis - that Merrick was as damaged by his embedment in high society as by his experiences as a ritually abused freakshow attraction - doesn't really seem to ring true, at least not in this version of the story.

There's a huge amount to be drawn from it, though, and even a bit of gratuitous nudity for us all to enjoy. No, not Patricia Clarkson's waps (though those are also on show), I'm talking about that glimpse we get of the real John Merrick's penis, which is perfectly in proportion. Cool. (3.5)
Posted by Rick Burin at 18:21