A micro-update for your delectation, featuring all of the above, and not much more. Also, I went to see The Lion King, which was great fun. Here I am at it.

Incidentally, we crawled raced past 250,000 all-time hits this week, so thank you kindly for your continued support. 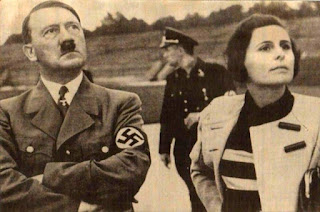 The Wonderful, Horrible Life of Leni Riefenstahl (Ray Müller, 1993) - If you find yourself saying things like: “The reason I sent that telegram to Hitler was…” or “… Hitler hated it, ask anyone who was there”, it may be time to take a long, hard look at your life.

But since Leni Riefenstahl isn’t happy to do that, this absolutely extraordinary film does it for her.

The idea was actually Riefenstahl’s.

The greatest female film director of all time – and the only one to have filmed a Nuremberg Rally – had been shopping the project around for a while, and finding that more than 200 respected documentarians wouldn’t touch her with a barge pole, because of The Triumph of the Will, the fetishistically fascist Olympia, and that one where she borrowed extras from a concentration camp for the crowd scenes of gypsies. Plus all the telegrams to Hitler. And her close personal friendship with Josef Goebbels, whom she unconvincingly describes here as “my worst enemy”.

Enter Ray Müller (“the umlaut is a noble symbol and not to be mocked” – Herman Göring), who somehow manages to walk the trickiest, most perilous of tightropes: making a credible, even-handed and deeply insightful film about Leni Riefenstahl in which she is the only interviewee. His remarkable movie – which it’s still kind of difficult to believes genuinely exists – traces Riefenstahl’s journey from dancer to (gorgeously lit) actress to mountaineer to feature film director and finally documentary-maker of choice for the Third Reich. He wisely allows the 90-year-old Riefenstahl to tell her story, using the most perfectly chosen footage and allowing her to offer insights into her creative process, which – whatever you think of her as a person (and in my opinion, she was basically an utter, irredeemable shit) – usually resulted in the most staggering footage.

He also lets her mount the case for the defence, while occasionally and invigoratingly taking her to task for evasion, deceit and instances of appalling moral turpitude. The sequence in which she denies having anything to do with the creation of the 1934 rally itself, only for Müller to throw in a lantern-lit parade with undeniable echoes of the first scene Riefenstahl ever shot, is just one of the sublime, unaccented juxtapositions that pepper this unique film. There’s also the continuous disappearance of her gentle, perma-smiling façade when her carefully-navigated narrative of denial is questioned – or when she thinks the camera is off – and a prologue mixing footage of Nazis and tranquil, beguiling underwater footage that’s simply the best imaginable way of kicking us into this troubling story.

While the film does ultimately lose a little momentum when it follows Riefenstahl to Africa and to the bottom of the ocean, its decision to portray Riefenstahl’s whole life is almost certainly the right one, and the last couple of minutes are astounding, as Müller tries to pin Riefenstahl down once and for all, and her response is everything at once: full of regret, remorse, anger, confusion, self-delusion, and ultimately an attempt to manipulate the world again.

But I suppose this is simply what happens when you let a woman direct films.

Leni Riefenstahl really was a Feminazi. (4) 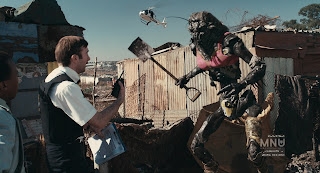 District 9 (Neill Blomkamp, 2009) - This modern sci-fi marvel is about racism, corporate greed, media complicity in state-sponsored terrorism, aliens who look like prawns and a big robot that makes things go “pooosh” and explode when it shoots them. The story, set in Johannesburg and with clear echoes of Apartheid-era South Africa, unfolds initially as a documentary, telling the 20-year story of an alien craft that halts over the city and is prised open to reveal scared, malnourished creatures who end up being detained in a slum. After rioting, the government brings in a private contractor to shift the 1.5m “prawns” – the reductionist racist epithet of choice – transforming the life of the company owner’s sweet, callow, over-promoted son-in-law (Sharlto Copley).

Perhaps in its ultimate shift from a sci-fi movie with lashings of body horror to a sometimes sentimental action film it loses a touch of its novelty and clout – Alien to Aliens, if you will – but it is a fearsomely clever movie with a sense of swaggering self-confidence, a firm grasp of the unexpected and a tremendous amount to say about the world in which we live. It’s also brilliantly and often outrageously funny, whether saddling Copley with a hilarious media smear or giving full flight to scenes of metal-suited mayhem that make Iron Man look crap by comparison (it is crap, anyway). From its inspired evocation of the ‘other’ – a ghettoised, stomach-churning enemy, painted as sub-human – to the unexpectedly moving, poetic final image, it’s mostly very special indeed. (3.5)

I started rewatching 'all the Mad Max films, climaxing with Fury Road', but since I didn't like the first two, I'm revising that plan.

Mad Max (George Miller, 1979) - It's flashily directed in its trashy, B-movie-ish way, but this Australian actioner is so formulaic, derivative and simplistic that it's kind of boring. (2) 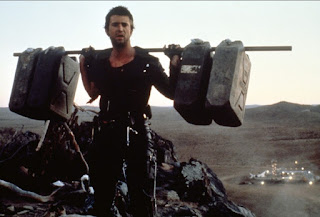 Mad Max 2: The Road Warrior (George Miller, 1981) - Grumpy Max (Adolf Hitler) is back in this one-note sequel, scowling as things go boom. I genuinely don't understand why this is supposed to be good. The prologue is nattily done and the ending is a knockout, but what's in between is almost unremittingly crap, with awful characters, risible comedy and a whooping, moronic sensibility that's quite uniquely offputting. Miller certainly knows his way around a crane shot and a flash of kinetic action; if only he could do anything else. (2)

Thanks for reading.
Posted by Rick Burin at 17:33