Cars going vroom-vroom, Brendan Gleeson swearing and Rainn Wilson wielding a wrench, in our latest round-up of reviews. I say "our", I mean "my". 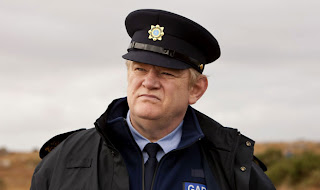 The Guard (John Michael McDonagh, 2011) – Fun comedy about a sweary, pill-popping, apparently racist provincial Irish cop (Brendan Gleeson) with his own code of ethics, and what happens when he’s asked to help an FBI agent (Don Cheadle) bust a drug-smuggling ring. The film has an irreverent if sometimes predictably contrary sense of humour – I particularly liked the taunts in the briefing and Gleeson’s “milkshake headache” – an excellent performance from its star and the odd, oddly-moving moment, even if those concessions to sentiment seem somewhat shoehorned in. It also treats its crime plot lightly, not allowing it to unbalance the film, and – having seen the various scenes that ended up on the cutting room floor – knows when to quit. It isn’t in the same league as the dazzling In Bruges, to which it’s constantly compared, but it’s a charming and amusing film, and an enjoyable way to spend an hour-and-a-half. (3) 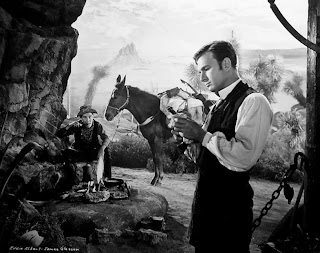 The Dude Goes West (Kurt Neumann, 1948) – Thoroughly likeable Western spoof, similar in tone to the Gary Cooper classic Along Came Jones, about a bookish gunsmith (Eddie Albert) who tangles with Indians, gunmen and an endlessly-suspicious hottie (Gale Storm) after swapping Brooklyn for Arsenic City. Albert, best remembered today for his part as Gregory Peck’s mate Irving in Roman Holiday, is good value in the lead, the script is full of sly, affectionate digs at the genre – the audience discovering this alternate West alongside its hero – and there’s a superb supporting cast, including Binnie Barnes as a nefarious saloon-keeper, Gilbert Roland playing her fast-drawing henchman and, best of all, Barton MacLane – spectacular as Albert’s guardian angel, a heavy-set murderer with a price on his head. The only shortcoming is the heavy-handed score, which flags up every big gag or ominous development with unnecessary bombast. (3) 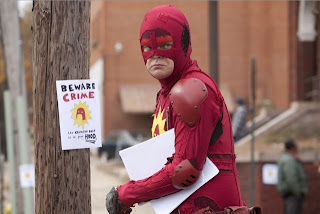 *SPOILERS*
Super (James Gunn, 2010) – A massive loser (Rainn Wilson) loses his wife (Liv Tyler) to a badass drug dealer (Kevin Bacon, obviously), then loses the plot, reinventing himself as a wrench-wielding superhero called The Crimson Bolt. This DIY spin on comic book mythos is truer, darker and more subversive than Kick-Ass, boosted by Wilson’s surprisingly deep, complex characterisation as a man at the end of his tether. It’s also very funny for the most part, though harmed somewhat by a troubling scene in which the excellent Ellen Page, as Wilson’s slightly unhinged kid sidekick, effectively rapes him. I’m not sure if it’s supposed to be funny or sexy, but it’s neither, it’s just illegal. A shame, as the murals with tiny hands, Wilson’s hilarious catchphrases (“Shut up, crime”) and Page’s acerbic, excitable jabbering (“Unless you’re laughing at how gay it is...”) show a sharp and silly wit at work. That mystifying misstep aside, it’s a good film, with a genuine heart beating beneath all of its hilariously excessive violence. Great credits sequence too. (3) 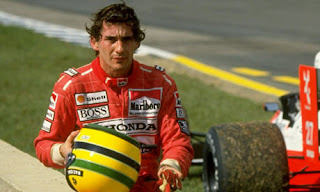 *SPOILERS*
Senna (Asif Kapadia, 2010) – I was a big Senna fan as a kid and I was devastated when he died. I actually had two Senna matchbox cars in his McLaren days, because I didn’t realise that they all had his name on one side and Alain Prost’s on the other – and I thought I’d bought the Prost one by mistake, so my mum got me another (thanks Mum). Anyway, that meant they could race each other on the window-sill, so that was cool. This hagiography is exciting, engrossing and affecting, if slightly slim in scope and painting the somewhat controversial Senna as little less than a saint. I particularly liked the sequence set around his first Brazilian Grand Prix win, an extraordinary feat of endurance that sent much of his upper body into impotent spasm. We learn little of Senna’s childhood or private life and the spoken contributions are largely from journalists (the rare insights from insiders like Sid Watkins are generally far more interesting), but there’s a wealth of classic racing footage and some revealing behind-the-scenes film of the hero sticking it to that prize-one-dick-of-an-FIA-boss, Jean-Marie Balestre. Alain Prost, portrayed here as a snooty, boring and calculating hypocrite, also makes for a great villain. The final 20 minutes, dealing with Senna’s untimely death on the track at Imola, are virtually unwatchable, taking me back to that awful Sunday and walking onto the field behind our house to tell my dad that Senna was dead. (3) 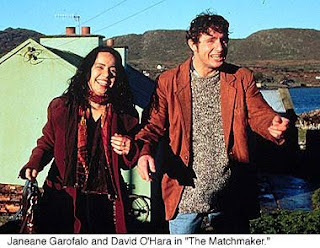 The MatchMaker (Mark Joffe, 1997) – This much-maligned comedy is actually quite appealing in its brainless way. It’s another in the seemingly endless line of “uptight city slicker decamps to the country, is won over by its quirky charms and falls in love” movies. That classic set-up has given us I Know Where I’m Going, Local Hero and Seducing Dr. Lewis, but its increasingly formulaic sub-genre also houses all manner of mediocre and slapdash efforts. Here, filling in the blanks, it’s Boston political assistant Janeane Garofalo (in her short career as a mainstream romantic lead) who decamps to Ireland and falls in love with bartender and former journalist David O’Hara. Conflict is presented in the shape of pouty Saffron Burrows, Garofalo’s thankless task of digging up Irish roots to help win her senator an election, and her colleague Denis Leary, who looks and acts like Alastair Campbell. The title figure is Milo O’Shea, who hosts an annual match-making festival, and bets £100 that he can get Garofalo and O’Hara together.

The plotting is muddled, with contrivances so clumsily foreshadowed it's like all the characters have Donnie Darko-style tubes coming out of them, and so many threads left untied it’s difficult to keep count, while the jokes range from the genuinely offbeat and amusing to the grindingly obvious. In terms of atmosphere, there really is a crane shot of Garofalo running along by the coast, whooping and waving her arms about as the strings soar. And the film’s knowledge of traditional Celtic song is based almost entirely on Van Morrison’s album Irish Heartbeat. But I thought The MatchMaker was nice: easy to take in its meandering, sloppy way, that hoary old set-up still as winning as it ever was, the lovely scenery, gentle pace and constant, pleasant diversions compensating for a script that’s essentially a bit of a mess – perhaps because it was comprehensively re-tooled by a second writer before shooting. Garofalo is alright – I usually really enjoy her schtick, but I think she’s slightly miscast here, or else struggling with inconsistent characterisation – though it's O’Hara, O’Shea and David Kelly (who only turns up for a minute or two) who lift the spotty material. It's... cosy. (2.5) 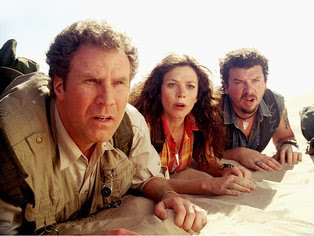 Land of the Lost (Brad Silberling, 2009) – Binge-eating scientific genius Will Ferrell, leggy assistant Anna Friel and vest-wearing fireworks salesman Danny McBride find a porthole to a parallel world filled with dinosaurs, monkey men and lizard people in this resounding box-office flop. Another comic reboot of a straight ‘70s TV show, it features bizarrely amateurish special effects for a film that cost $100m, but it’s fairly funny – especially Ferrell’s delivery of dialogue – and lacks the mean-spiritedness present in too many of his collaborations with Adam McKay. I also like Friel’s voice – it’s nice to hear a Rochdale accent in a Hollywood film, even if there’s no such thing as Manchester Zoo. Rounding out the trio, McBride is less irritating than usual: I still think he’s completely talentless, but at least he tones it down a bit. It’s quite a lazy film, and there’s not much story to speak of, but as a Sunday afternoon watch it’s kind of fun. (2.5) 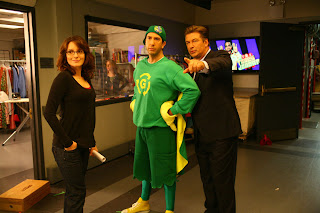 30 Rock (Season 2, 2007-8) - Mediocre second season of the somewhat overrated hit sitcom. It's not a bad show, but it isn't in the same league as Parks and Rec, Community or Party Down - perhaps because it's constantly eyeing those big ratings. The main problem is a complete lack of character development, at least until they try to cram loads of the stuff into the last episode. These are just cartoons who learn nothing. Season 2 offers nothing more than further adventures from the lives of TV show writer Tina Fey, corporate slickster Alec Baldwin, troublesome stars Tracy Morgan and Jane Krakowski, page Jack McBrayer - a toothy, deferential yes-man from the sticks - and arch nerd Judah Friedlander. There are a couple of big laughs in most episodes, and a handful of smaller ones, but there's little heart or depth, and a surprisingly amount of pointless nastiness begins to creep in by the close. The worst episode is still the first one, which Jerry Seinfeld clearly agreed to do in exchange for them letting him relentlessly promote Bee Movie. It's pretty embarrassing and I didn't come back to 30 Rock for about three weeks afterwards. Ultimately, there are no genuinely classic half-hours here, though the best moments belong to guest star Will Arnett (G.O.B. from Arrested Development), as Baldwin's gay, conniving nemesis. Matthew Broderick also has a hilarious part in the season finale, while Friedlander and Morgan are always good value - the latter consistently breathing comic life into his vain, preening, ludicrous megastar. All in all, a bit disappointing, really. (2.5)
Posted by Rick Burin at 20:41