... in which I grab a few of the Buster DVDs on the floor of my room, watch them and then write about them. Featuring a lesser early short, two cheapo efforts, a TV drama and what would have been a perfect swansong, had he not then done a few other things.

FRAGMENTS OF AN EARLY SHORT 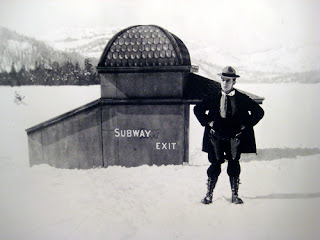 The Frozen North (Buster Keaton and Eddie Cline, 1922) - The least of Buster's early shorts, I suppose, if only because around six minutes of the film are missing - apparently the six minutes needed to understand what on earth is going on. There are good moments (particularly the two-men-fishing bit) and some amusing spoofery - of Nanook of the North, of Erich von Stroheim and apparently of William S. Hart, though I've never seen more than snippets of his work - while the nice closing gag prefigures Sherlock, Jr., but it's hard to get a handle on the story, while Buster's brutish, selfish character is at odds with the put-upon, stoic little guy we all know and love. (2.5)

... in which Buster pitches up at Poverty Row studio Educational Pictures, having been sacked by MGM. I've reviewed his personal favourite of his 16 films there already - Grand Slam Opera. Coming up are reviews of his first two shorts at the studio: 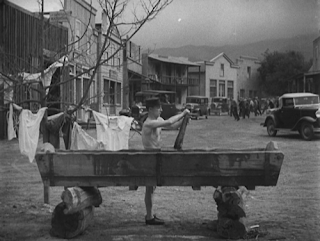 The Gold Ghost (Charles Lamont, 1934) – Buster pitches up in a ghost town – becoming a Ghost Buster? – where he proves himself as a man by taking on some claim jumpers. His first short at Educational is a lively Western spoof. There’s too much of him walking into things and then holding the afflicted body part, but he has fun trying out a lolloping Western walk, there’s a wonderful bit with a fantasy shoot-out and the action climax is nice, even if you’re willing him to do something truly Buster-ish. The closest we get is a neat, two-footed jump on a seesaw, to disarm a gunman. But my favourite bit is a reference to Buster's most famous stunt: a neat, tiny double-take he does when it looks for a second like the front of a building may be about to fall on top of him. (2.5)

Buster's second outing, Allez-Oop (Charles Lamont, 1934), is strangely melodramatic and a little threadbare, as his watch-repairer tries to woo customer Dorothy Sebastian – his sometime real-life girlfriend and the star of his last silent feature, Spite Marriage. There’s a super gag at the start where Sebastian’s face is distorted by an eyeglass, and the last minute is good (does anyone know if that’s Buster on the trapeze?), but what’s in between doesn’t quite cut it. When it becomes clear that Buster Keaton – yes, that Buster Keaton – is off to the circus, you expect more than him just asking the guy next to him to pass some refreshments and a cushion. And as unexpectedly nifty as the tenement climax is, it unfortunately calls to mind his 1921 short Neighbors, to which most things would pale in comparison. (2)

BUSTER AS BUSTER. SORT OF 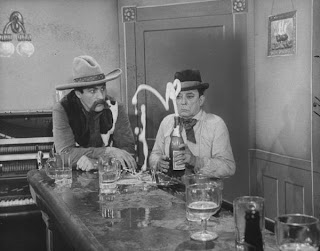 One of those passable flashbacks.

TV: The Silent Partner (George Marshall, 1955) - A forgotten silent comic (Buster Keaton) has a quiet beer in a Hollywood bar, while next door at the Oscars a legendary movie producer (Joe E. Brown) dedicates a lifetime achievement award to the absent stoneface with whom he made his name. The Silent Partner is a moving, fascinating TV drama from the Screen Directors Playhouse series - made by Hal Roach Studios, a key player in pre-talkie days - with an amazing dramatic performance from Buster, interspersed with reasonable comic moments, and a cast that includes Greed grasper ZaSu Pitts, fellow silent players 'Snub' Pollard, Heinie Conklin and Spec O'Donnell, Western regular Jack Elam and regular Oscars host Bob Hope, whose sequences were shot especially. It does a slight disservice to the brilliance of silent comedians - there are none of Buster's surreal leanings, meticulous set-ups or dazzling stunts in the flashbacks, it's all ladders, pratfalls and being kicked up the arse - and he isn't portraying a genius in slap shoes, but an unwitting clown a la Marion Davies's character in Show People. (It's also worth pointing out, if this is supposed to be a thinly-veiled account of the star's own demise, that it wasn't really the talkies that put the skids on Buster's career, it was MGM and alcoholism.) But this 25-minute drama is a lovely piece of work, with fantastic framing scenes where his middling delivery contrasts with a facial expressiveness that's a thing of utter wonder and beauty. The moment where he silently, almost imperceptibly, raises a glass to his old comrade is a real choker. (3)

... AND A NOSTALGIC TREAT (WITH ADDED CANADA) 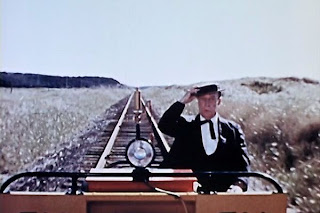 SHORT: The Railrodder (Gerald Potterton, 1965) - Buster's warm, funny tribute to his own silent films of the '20s was funded by the National Film Board of Canada in a bid to attract more moviemakers to the country. It's a charming little colour comedy - dialogue-free, but with cartoonish sound effects - that sees our hero zipping around the country's railroads on a little orange contraption, seeing the splendid panoramas and the shipyards, cooking lunch aboard and trying vainly to shoot geese after covering his 'train' in leaves. There are at least three big laughs - the absurd opening, in which he decides on a whim to visit Canada, jumping off a bridge and swimming there, and a couple of cleverly-timed tunnel gags - along with many amusing comic touches, and nods to The General (the premise), Sherlock, Jr. (some near-misses with vehicles and a water-tower), My Wife's Relations (the old-time camera) and The High Sign (Buster being overwhelmed by an improbably large sheet of folded paper). This is a man in touch with his own mythology, as evidenced by the glorious moment in which he fishes a porkpie hat out a bottomless compartment, pops it on his head and sits back (see above). There's little stuntwork, of course, and some of the material is a little samey, but it's a valuable and welcome nostalgic treat, with ample evidence that Buster's comic imagination was still firing, a year before his death. (3) 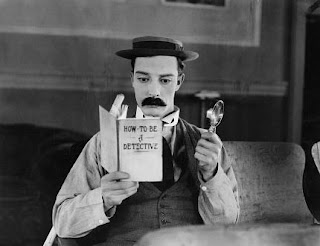 For some reason I haven't reviewed Buster's features for the blog (aside from a bit on The Cameraman here as well as The Goat and The Boat), but there's a piece about some of his early shorts here, some things about his even earlier shorts here, and reviews of Cops, My Wife's Relations, Grand Slam Opera via those different coloured words there.
Posted by Rick Burin at 21:45