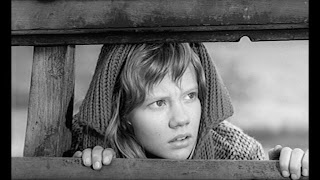 ... isn't a real thing, sadly, so I've been hosting one in my room. We (I) didn't show her finest film, Whistle Down the Wind (#19 in the performances list), #45 in the all-time films list), as I've seen it quite a lot lately. If you're disappointed by that (not sure why you would be), you can watch this amazing video. Hayley's not actually in that clip, but it does feature perhaps the finest line of dialogue ever uttered on screen.

I just really like Hayley Mills. She's an actress of rare gifts, and was one of the greatest child stars of all time. Here's the round-up: 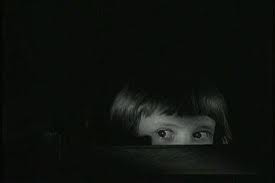 Tiger Bay (J. Lee Thompson, 1959) – A mischievous, tomboyish loner (Hayley Mills) finds kinship with the murderer who takes her hostage (Horst Buccholz) in this unusual, brilliantly-photographed drama, dominated by Mills' staggering debut turn. Johnny Mills (her real-life dad) also shines, as the cop who would quite like her to stop lying. With a rich, intelligent screenplay, flavourful semi-documentary exteriors shot on location around Cardiff (and Bristol Harbour) and a wealth of vivid, painterly set-pieces – including a superb face-to-face in a darkened church attic – it’s suspenseful, funny and extremely affecting. (4)

Here's an interesting reminiscence from someone who was aboard the big ship during filming. 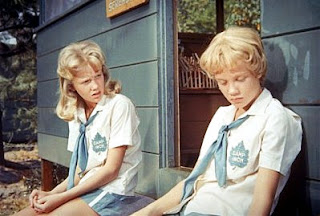 The Parent Trap (David Swift, 1961) – I didn’t cry four times during The Parent Trap, shut up. You cried four times during The Parent Trap. This is a largely wonderful, seriously sentimental family comedy about twins Hayley Mills and Hayley Mills, separated in infancy, who meet by chance at a summer camp and scheme to bring their estranged parents Brian Keith and Maureen O’Hara back together. The special effects are decent (well, except for the bit where Pretend Hayley has to hold an enormous sleeping mat next to her head), the supporting cast of Charlie Ruggles, Una Merkel and Leo G. Carroll is absolutely first-rate and Hayley is just a joy. Only downsides: it runs out of steam with 20 minutes to go, and the ‘Let's Get Together’ song is faddy rubbish. (3.5) I really like the remake as well. 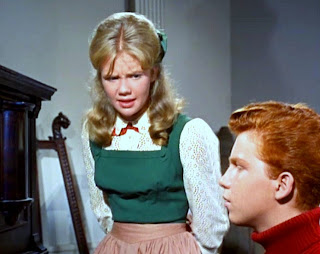 *SPOILERS, BUT THE PLOTTING IS QUITE OBVIOUS ANYWAY*
Summer Magic (James Neilson, 1963) – This Disneyfied slice of Americana shouldn’t really work. For a start, there’s no real story to speak of, beyond a rough paraphrasing of The Railway Children, minus the trains. That’s not to say there aren’t bits of plot, but they’re gathered together in clusters, to be fought with for a couple of minutes every half-hour or so. A family moves to a new yellow home in the country, does it up nicely and has a few minor adventures – some of them romantic – but there’s always the chance that the chap who really owns the house will come and reclaim it, only we know that he won’t because it’s a Disney film. There are some songs by the Sherman Brothers, the quickest, weirdest volte face by a character in cinema history, and a confusing message about how girls should pretend to be coquettish and stupid if they want people to like them. Show your daughter this and Grease and they will be expelled, pregnant or dead within a week. There’s also the problem of Dorothy McGuire. The film features three of my favourite, disparate actresses: the wonderfully gifted child star Hayley Mills, sassy, ironic ‘30s leading lady Una Merkel, and McGuire – certainly the most sensitive American screen actress of her generation, and probably the best. It’s rare you happen upon a performance as good, complex or multi-layered as her harsh, loving, old-before-her-time mother in Elia Kazan’s A Tree Grows in Brooklyn. Or her astonishing turn as a mute targeted by a murderer in A Spiral Staircase (soundless screaming - wtf?!). Or, indeed, her (not actually very) ugly duckling transformed by love in An Enchanted Cottage. She made those three films in a single year. But she may as well not be in Summer Magic, as she doesn’t actually bother to do any acting. She has lines. And potentially poignant scenes. But she barely moves her (suspiciously?) unlined face, which is fixed in a supposedly heartening ‘motherly’ smile throughout. It makes her look like a chipmunk in an apron.

For all that, though, I rather like the film. It is a mess, but its various elements are all pleasant in themselves – and it kept me entertained and cheery across a couple of hours. Mills is very good as a teenager graduating from tall-tale-telling to adulthood and the possibility of lurve, and she has three particularly special moments. The first is one of those passages in the John Ford manner, with soft backing music (this time played on-screen by Burl Ives) and a troubled character just looking on as the camera fixes on them. It’s heartbreaking, and beautifully played. The others occur after her row with massive bitch Deborah Walley, where Mills spills the shameful beans (the worst kind of beans) about Walley’s past. “Oh Julia, I’m-I’m sorry, I...” she says desperately, before chasing her nemesis into the other room. There, her mum demands an explanation. “Oh mother, you know what I said,” says Mills forlornly. And it's desperately moving. I did that thing where you very-almost cry, but don't quite. It’s at this point that Walley turns from the antichrist into an angel, transformed by the power of love and poor screenwriting. The supporting cast is interesting. Unexpectedly, Burl Ives is the pick of the bunch as a tubby optimist with a pleasant singing voice. His popular children’s song ‘Ugly Bug Ball’ is on the soundtrack, though my favourite numbers were ‘On the Front Porch’ (complete with Mills’s sad staring) and ‘Flitterin’’, sung by the family before their move to the country. Una Merkel is virtually unrecognisable – even from the previous decade – as Ives’s pessimistic wife, with a great big head, and a phony (?) 60-a-day growl that obscures her familiar and delightful squeak. Of the other kids, Michael J. Pollard (who gave Michael J. Fox his phony ‘J’) is good and Jimmy Mathers is cute, though Eddie Hodges can’t really act.

Summer Magic is a strange movie. A remake of a 1938 RKO film, based on a 1917 play, based on a book, what fragments of plot it retains also seem to have found their way into the second Nanny McPhee outing (though the use of the word "poo" that I so much enjoyed in that film isn't present here). There’s no dramatic impetus, Disney’s emotional heavyhandedness detracts from the picture's power and the most exciting name on the cast-list doesn’t turn up. But I still like it a great deal: for the fun numbers, the consistent entertainment value, and Mills’s commanding performance, which touches true brilliance in a trio of moments. (3) 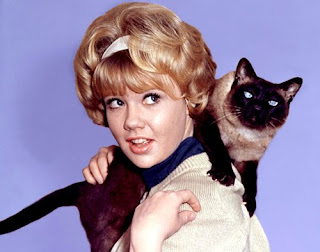 That Darn Cat! (Robert Stevenson, 1965) - An FBI agent (Dean Jones) has to track a cat on its nightly prowls, after its owner (the lovely Hayley Mills) claims the puss can lead them to the gruesome twosome behind a bank job and kidnapping. But get this - the Fed is allergic to cats, and keeps sneezing! And people keep falling over. This witless, cartoonish Disney romp - full of garish visuals and tiresome mugging, and wasting a promising cast that includes old-timers Elsa Lanchester and William Demarest (his hair a curious shade of orange) - is the least of Hayley's vehicles for The Evil Mouse, but just about worth it for her appealing, amusing performance. It's not as bad as the remake, anyway. (2) 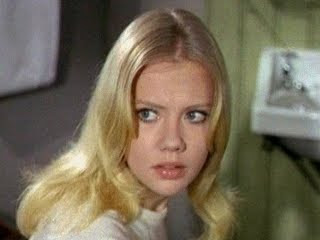 The Family Way (Roy Boulting, 1966) is like Sons and Lovers re-imagined as a breezy sex comedy, as arty Hywel Bennett – living in the shadow of his gruff father (Johnny Mills) – somehow fails to consummate his marriage with the 20-year-old Hayley Mills. This being the north in the 1960s, soon housewives in headscarves start gossiping, which doesn’t help Bennett’s mood – or his mojo. Hayley is lovely in her first adult role, while her pops is simply exceptional as a boozy, sad blowhard who understands nothing, not even the disappearance of his best friend some 30 years ago. His rapport with screen wife Marjorie Rhodes strikes just the right balance of tough and tender. The film has a stagy three-act structure, but it’s opened up nicely with some shots of the principals wandering around Bolton, there are a few big laughs and the whole thing builds to a particularly satisfying, erm, climax. (3)

... so there you have it. An offbeat British masterpiece, three Disney vehicles and a knockout sex comedy. And because you've been very good this year, here's a bonus write-up of a certified Hayley Mills classic, from the archive: 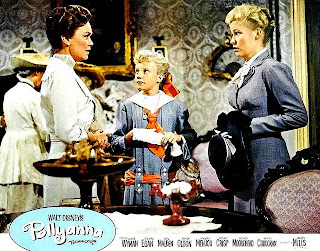 Pollyanna (David Swift, 1960) is an enchanting family film based on an enduringly popular novel. The last Disney production overseen by Walt, it takes numerous liberties with the source – and even makes up an Abraham Lincoln quote to give Pollyanna’s musings some gravitas – but it’s utterly charming. The “glad girl” of the title (Hayley Mills) moves in with her aunt, uptight town matriarch Jane Wyman, and her boundless optimism begins to work its magic on Wyman, hypochondriac Agnes Moorhead, embittered loner Adolphe Menjou and intolerant, weak-minded priest Karl Malden. Disney called off the search for his Pollyanna after seeing Mills in Tiger Bay, while her father (celebrated British screen star Johnny) famously sparked her into life with on-set coaching. Her natural performance, and pinpoint characterisations from the on-form veterans, create many lovely vignettes in this episodic, excellent movie. Lovely cinematography too. (4)
Posted by Rick Burin at 21:20