Murnau, stupid comedy and a massive hammer. Look upon my works, ye Maltin, and despair. 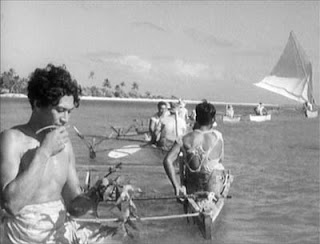 *SOME SPOILERS*
Tabu: A Story of the South Seas (F. W. Murnau and Robert Flaherty, 1931) - At first glance this last-gasp silent appears a perfect meeting of minds, bearing the hallmarks of both famed documentarian Flaherty (ethnography, hunting and boats) and German Expressionist pioneer Murnau (dream sequences, love and shadows) - but really it's Murnau's show all the way. Having moved permanently to Bali and invited Flaherty to join him as director of photography, the director grew tired of his cohort's indulgences (particularly booze and fags) and angered him by asking that he wear felt slippers on his newly-waxed yacht. Flaherty jumped ship, meaning that Floyd Crosby shot virtually the entire thing (and won an Oscar for his efforts), while Murnau's positive experiences saw him set up a deal with Paramount for five sound features shot on the island. Sadly they'd never come to fruition, as the director died in a car crash the week before Tabu's premiere. The film is heralded as the last hurrah of a genius, but while it has countless remarkable facets, it's also heavily flawed. The story is a simple one, with Polynesian virgin (and Mrs Rick lookalike) Anna Chevalier's happy existence shattered as she is declared "tabu": off-limits forever, unless you want to piss off the gods. Her boyfriend, a fun-loving fisherman (Matahi, who looks nothing like me), whisks her away, but complications concerning a scary old man, a sizeable party bill and a man-eating shark threaten their happiness. The film is really a string of lengthy set-pieces, some considerably more interesting than others. At its best, it's up there with the finest of '30s cinema, and like little else you've seen, humming with ambition (it was shot entirely on location) and dripping with visual inventiveness: silhouettes navigating shimmering waters, ominous crafts gliding into busy ports, women jiggling their boobs.

The trip to the ship is exhilarating (there's stock footage in The Falcon in Mexico that was apparently shot by Orson Welles for his uncompleted It's All True that seems to purposefully ape it), as dozens of natives mount homemade crafts in a rush to greet their visitors, and so is the inappropriate dance sequence, while events build to an unforgettable climax. But Tabu is a film that's sporadically extraordinary, rather than consistently engaging. Part of the problem concerns the direction of Murnau and associate Walter Spies. They based tableaux on classic German paintings and asked their actors to move in a style they dubbed "architectural choreography", which is what a dance would look like if it was incredibly slow and not that fun to watch. It does create some arresting imagery (such as the homoerotic image of Matahi lying back on a cascading waterfall), but I swear that a third of the running time is devoted to Chevalier lying on the ground crying. It's a shame, because she's clearly a really talented actress - she creates moments of absolute wonder on the occasions that the shackles are off and her more naturalistic mode of acting is allowed. It's also worth mentioning that when she's actually dancing, she's just mesmerising, as you might expect of a former Follies hoofer. Matahi isn't terribly expressive - he's more an athlete than an actor - but the fact that he's slightly out of his depth rather suits the character. A second notable shortcoming is Murnau's persistence with his gimmick of not using title cards. They're almost always necessary in silents and he must know it, as he cheats terribly by incorporating countless scenes of an army officer writing in a diary, which is frankly a joke and slows the action to a crawl every time he and his calligraphy pen appear. The director does add a lively sync score, with constant music and effects, which is quite effective, but it can't make up for some seriously iffy pacing. Still, erratic acting and a narrative that doesn't always sustain interest are offset by the film's obvious virtues: Murnau's invigorating visual sense and the sheer scale of his ambition. (3)

See also: I slagged off Murnau's The Last Laugh here, for being boring. Come laugh at me for being a philistine. Flaherty's astonishing Louisiana Story turned up in my favourite films list. 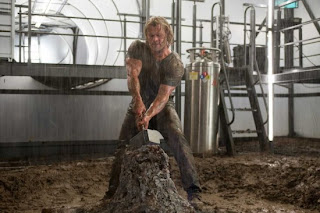 *SPOILERS*
Thor (Kenneth Branagh, 2011) - Well, that was fun. A collision of grand-scale, po-faced fantasy and fish-out-of-water comedy, as cocky, hammer-wielding prince Thor (Chris Hemsworth) is banished from his realm by stern father Anthony Hopkins and crash-lands on Earth, where he's immediately run over by feisty research scientist Natalie Portman. The action set-pieces are lively, but largely confined to the opening and closing half-hours - the exception is a memorable beat-em-up in a cordoned-off FBI zone - with the middle part devoted to character drama, refreshing comedy and learning. Met with suspicion and confusion, Thor learns to be a nicer, humbler person, while the audience learns how utterly heinous and devious his brother (Tom Hiddleston) is. The film doesn't grip like the greatest of comic book movies - it never approaches the richness of character or emotional complexity of, say, Spider-Man 2 - but it's cleverly scripted and framed, and very well cast, with Hemsworth ideal as the square-jawed lead, Hopkins better than he has been for a while and Hiddleston (Woody Allen's F. Scott Fitzgerald) making for an eminently hissable villain. The whole thing is directed with admirable panache, a confident tone mixing myth-making and mirth, and some deliciously slanting cameras, by the somewhat improbable figure of Kenneth Branagh. (3) 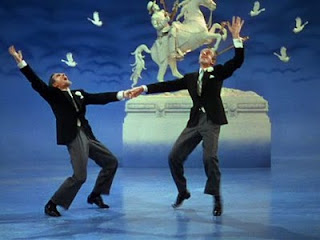 Ziegfeld Follies (Various directors, 1945) - Broadway legend Florence Ziegfeld (William Powell) is in Heaven. He’s happy enough up there with his memories, but dreams of putting on one last show – which coincidentally consists almost entirely of performers contracted to MGM. It’s an absolutely beautiful opening, with Powell’s wonderfully warm, moving, nostalgic performance (a reprise of his part in The Great Ziegfeld nine years before) complemented by a gobsmacking evocation of Broadway past, peopled entirely by puppets. After that it’s middling comedy and good musical numbers all the way, with unlinked skits and songs paraded across the screen for close to two hours (it was three, before test screenings proved absolutely disastrous). The first two “comic” sequences are more like Kafkaesque nightmares – as Keenan Wynn repeatedly fails to place a phone call and Victor Moore is sentenced to death for spitting on the subway – though the Red Skelton one builds from being alarmingly weak to agreeably potent, simply by adding alcohol. The best numbers are Lena Horne’s sultry ‘Love’, set in a Jamaican bar, Judy’s ‘A Great Lady Has an Interview’ – originally intended for Greer Garson, hence the relative lack of singing – and three of Fred Astaire’s four contributions. The opening ‘Here's to the Girls’ is a bit lacklustre after he exits stage left, but the next two – pairing him with Lucille Bremer – are epic, self-contained stories: ‘This Heart of Mine’ – in which his jewel thief falls in love – is both touching and theatrically ambitious (with rotating floors and travelators), while ‘Limehouse Blues’ is a tragic, dazzling tale of unrequited love in Chinatown. With Fred made up as a Chinaman. Fans of MGM musicals will know, however, that if there’s one compelling reason to check this one out, it has nothing to do with moving floors or Chinese Freds: it’s the landmark pairing of cinema’s two greatest dancers: one near the top of his game and the other getting up there to meet him. Fred was once asked who had been the best dance partner of his career. That’s easy, he said (I’m paraphrasing), Gene Kelly. They only ever shared the screen twice: in That’s Entertainment II, when their combined age was 141, and here. It’s an amusing quirk of cinema history that the two most inventive dancers ever to grace the screen would spend a fair chunk of their only real routine together knocking knees and kicking each other up the arse. But it’s a joy to watch – from the teasing intro (in which Fred claims not to know who Gene is, and Gene claims not to have been rehearsing) to a bearded, harp-wielding climax set in Heaven. If you’re wondering, in direct competition Fred looks that fraction more precise, graceful and exciting. As with most of these MGM anthologies (of which Words and Music is probably the best), Ziegfeld Follies is a mixed bag, but for every dreary, dated or needlessly overblown routine, there’s a goody around the corner. (3) 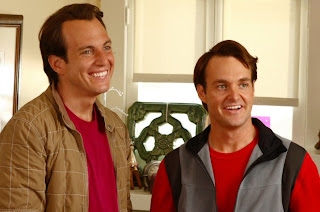 The Brothers Solomon (Bob Odenkirk, 2007) – Incredibly weird comedy about two self-styled “male brothers” (Will Forte and Will Arnett) who try to fulfil their dying father’s wish of having a grandchild by teaming up with potential surrogate Kristen Wiig (in a disappointingly straight role) and her massive, sweary ex-boyfriend (Pushing Daisies’ Chi McBride). The characters and the story make absolutely no sense – Forte and Arnett are playful innocents one minute, cynical bullies the next – which may be why most people hated the movie (this was the first film Richard Roeper ever walked out of), but it periodically bursts into life, with brilliant jokes that come out of nowhere. The best – and genuinely one of the funniest things I have ever seen in a movie – is where Arnett tries to make a clean break from a former crush, first playing it cool, then shouting: “Sick burn!” at her and finally sprinting away in slo-mo, grinning maniacally, as Odenkirk throws another ill-fitting power ballad onto the soundtrack. I have no idea why it’s as funny as it is, but I had to pause the DVD for a minute or two to recover. I think the film's worth checking out if it’s ever on TV, but be warned that to get the good stuff – a blissfully creepy credits sequence, high-fives at a fertility clinic, Arnett’s “romantic” meal in a corridor and the “bull-headed brother” set-piece – you have to sit through some real dross, including a few horribly misjudged jokes about disabilities. (2.5)
Posted by Rick Burin at 21:09