In the latest reviews round-up, I swear twice (sorry), get swept away by a modern French masterpiece and wander the streets of London clutching a naked cut-out of Jane Asher. Oh no, that wasn't me, that was John Moulder Brown. 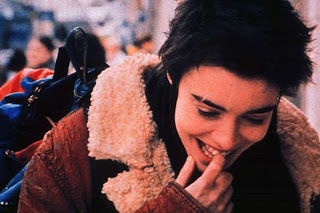 La vie rêvée des anges (Erick Zonca, 1998) aka The Dreamlife of Angels – Profound, poignant film about the friendship that develops – and then unravels – between two young women who meet at a factory in Lille. Ila (Élodie Bouchez) is friendly, compassionate and happy to ask for help; self-centred Maria (Natacha Régnier) throws her pride and practicality to the wind as she embarks on a self-destructive affair with an utter shit. A wise, insightful and immersive study of human relationships, and the nature of friendship, with exceptional performances from the two leads – especially the big-eyed, expressive Bouchez. This one’s going right to the top of the 2012 list. (4) 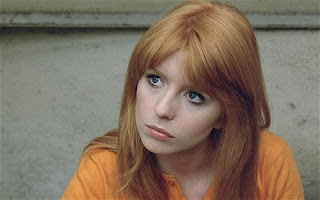 Deep End (Jerzy Skolimowski, 1970) is a fascinating, virtuosic study of romantic and sexual obsession set around a London bath house gone entirely to seed. John Moulder Brown plays a 15-year-old school leaver who finds work there and becomes besotted with the free-and-easy redhead (Jane Asher) who shares his duties. Their innocent flirtations escalate until he's chasing her around the London Underground with a monochrome cut-out of her naked body, shouting: "Is this you?!" It begins as a playful, absurdist and almost bawdy comedy - the only film I've seen that shares the feel of My Own Private Idaho, as Diana Dors shouts about George Best whilst rubbing a teenager's head against her boobs - then becomes darker and odder by the minute, as Skolimowski brings an outsider's eye, and an Eastern European sensibility, to bear on the complex, mutating material, on its way to the only ending these films ever have. Moulder Brown's accent is a pity - as with A Kid for Two Farthings, cockernee would have been preferable to estuary - but Asher's pitch-perfect performance, the inventive, well-paced narrative and Skolimowski's vivid visual sense, tying the intro to the ending with intelligent glee, make it a cast-iron classic. (4) 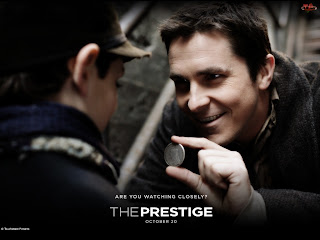 *SPOILERS*
The Prestige (Christopher Nolan, 2006) - Wow. That was great: one long magic trick, in which turn-of-the-18th-century magicians Christian Bale and Hugh Jackman indulge in an obsessive rivalry, their secrets revealed through a series of delicious, rug-pulling twists. Two of Nolan's most highly-praised films - The Dark Knight and Memento - leave me a little cold (he probably doesn't care), but this one's a wow: somehow sheer escapism, despite a narrative that takes in existential despair, suicide and death-by-drowning. Like Nolan's later Inception, his non-linear structure juggles three stories (or in this case, three time-frames), as Bale-reads-about-Jackman-reading-about-Bale's-life. Phew. There's the odd bad line ("You deserve each other"? Really?) or slip into domestic melodrama, and the film suffers from a serious case of Scarlett Johansson, but it's just a ripping good ride, with a spectacular denouement that made my brain ache. Someone is probably going to tell me that the pay-off doesn't make sense, but I don't care. So nerr. (4) 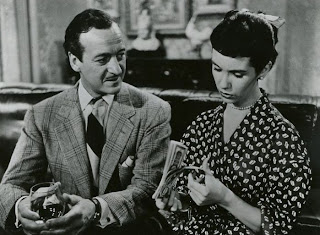 The Moon Is Blue (Otto Preminger, 1953) - Stagy, unusually frank sex comedy - written by playwright and '30s character actor Hugh Herbert of the "woo hoo!" catchphrase - about a professional virgin (Maggie McNamara), the newly-free bachelor (William Holden) who picks her up up the Empire State Building, and the caddish elder gent (David Niven) who later muscles in. It starts off very slowly - with a deeply boring wordless opening - but picks up greatly for a fresh, funny second half that recalls Bluebeard's Eighth Wife (Ernst Lubitsch's most underrated comedy), and is dominated by Niven's hilariously immoral characterisation. He really was a sensational light comedian - right up there with Cary Grant and William Powell. Wordy farce wasn't Holden's forte, but he's OK, while McNamara equips herself well - once you get used to the fact that she looks and sounds like the five-year-old Margaret O'Brien. Dated, sure, but for all its flaws, a fun way to spend an evening. (3) 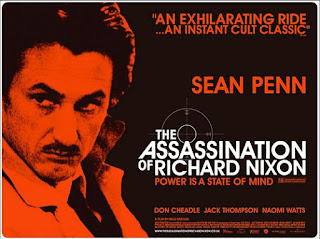 The Assassination of Richard Nixon (Niels Mueller, 2004) - This functional portrait of a beaten-down loser who finally snaps - and proceeds to mount the most hilariously shit assassination attempt of all time - owes no small debt to Taxi Driver and the classic Edward Dmytryk B-movie The Sniper. But it's just not in the same league. Sean Penn, surely the most overrated person in the entire world, isn't "acting" as much as usual - a welcome relief - but despite that atypically nuanced performance, a reasonable, unsensationalised script and Mueller's sporadically intelligent handling, it's all been done a whole lot better before. (2.5) 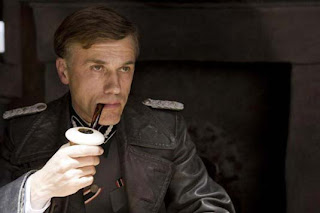 Inglourious Basterds (Quentin Tarantino, 2009) - Bizarrely lacklustre Tarantino film about various pockets of resistance fighters and secret agents planning to off the Nazi brass during a film premiere. It's watchable throughout and there's a taut, tense, tight-as-a-drum suspense sequence set in a bar - as a Gestapo officer begins to suspect undercover British soldier Michael Fassbender isn't all he seems - but the film is largely lacking the excitement and raw energy one usually associates with the director, or at least used to. Christoph Waltz is exceptional as a cultured Jew-hunter, but he's also the only character Tarantino bothers to flesh out, a mystifying decision in a film that bills itself as a Jewish revenge fantasy. When one considers the car-wreck that was Death Proof - comfortably one of the worst 10 films I have ever seen - you can view this as something of a return-to-form but, compared to Reservoir Dogs, it lacks distinctiveness, quality and heart. (2.5) 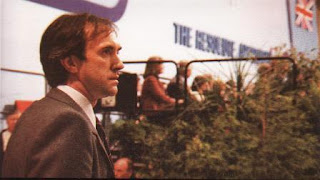 The Ploughman’s Lunch (Richard Eyre, 1983) – Incredibly cynical satire, written by Ian McEwan, about a BBC radio producer (Jonathan Pryce) and his relationships with fellow right-wing media types (including camp, mulleted Tim Curry), his working class parents and a Socialist historian. It’s more a series of polemics on British history and Thatcherite Britain than it is a coherent drama, which means that while individual scenes are often striking and interesting, the overall effect is rather muted. I also found it quite hard work spending 100 minutes in the company of such a hateful human being, so bereft of redeeming qualities, as Pryce’s selfish, duplicitous journo, even in the name of satire. I do get quite turned on by newsreels of the Suez Crisis, though, so we have that in common. (2.5) 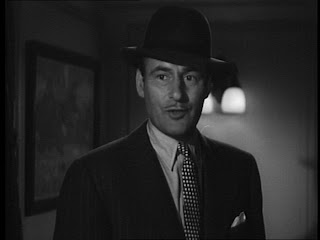 *INCLUDES A FACT-HEAVY GUIDE TO THE CHARMS OF THE FALCON SERIES*
The Falcon in San Francisco (Joseph H. Lewis, 1945) – This was the eighth of Tom Conway’s 10 outings as the eponymous crime-solver and adventurer, a role he took over from his real-life brother, George Sanders, in 1942. The series is notable for that trivia point, and as a breeding and dumping ground for studio RKO. The Falcon in Mexico is said to contain footage shot by Orson Welles for his never-completed film It’s All True. Music that features prominently in Falcon films turns up in other RKO pictures: San Francisco uses 'My Shining Hour' from the Fred Astaire musical The Sky's the Limit as background music, while the sumptuous theme for the classic noir Out of the Past was featured as an on-screen nightclub number in The Falcon Takes Over. That same film was the first adapted from Raymond Chandler’s Farewell, My Lovely, a huge hit for the studio two years later when it was filmed more faithfully as Murder, My Sweet. The series also includes bit parts for stars on the rise and on the skids. Alibi features up-and-coming Lawrence Tierney (later Joe Cabot in Reservoir Dogs) and future Out of the Past femme fatale Jane Greer - who later fell out of favour with Howard Hughes by not boffing him - while that idiot who brought King Kong to New York, Robert Armstrong, turns up in San Francisco 12 years on. People like Allen Jenkins, Cliff "Ukelele Ike" Edwards (the voice of Jiminy Cricket), Edward Brophy (the voice of Timothy the Mouse), Esther Howard, near-legendary character actor Elisha Cook, Jr. (the gunsel from The Maltese Falcon), Barbara Hale and Fox's favourite "other woman", Lynn Bari, appear in other outings.

Two key directors of the ‘40s and ‘50s also got their big break in Falcons: Edward Dmytryk – the noir specialist and notorious Hollywood Ten-ner who gave series highpoint Strikes Back such a punchy style – and Joseph H. Lewis, the B-movie legend who went on to make Gun Crazy and The Big Combo. Lewis isn’t given much of a free rein with the low-budget San Francisco, but he does contribute one fantastic little set-piece, in which Conway wakes up from being slugged, sees various blurry figures hoving into view, gets smacked around a bit and then falls to the floor, photographed artfully through a wooden chair – recalling Lewis’s predilection for shooting-action-through-inanimate-objects that got him the nickname “Wagon Wheel Joe” in his Western days. Otherwise, it’s a pretty pedestrian affair by the series’ standards, pleasant enough, but with a thin, somewhat unconvincing story and a predictable reveal, though if you want to see Edward Brophy being insulted by a lot of women, this is definitely the film for you. It was Conway’s last Falcon based on an original story; the final pair were remakes of the first two Sanders films. (2.5), just about. 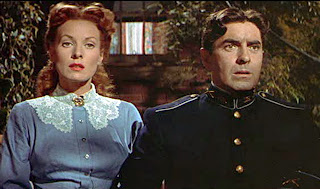 The Long Gray Line (John Ford, 1959) - One of Ford's worst films, a long, shapeless biopic of West Point trainer Marty Mahan (Tyrone Power) that's something like his version of Goodbye, Mr. Chips. It's seriously light on plot, beginning with tons of broad, witless comedy, before segueing into an hour of overwraught sentimentality, with no coherent viewpoint or - indeed - any point at all. There are some moving moments along the way, especially the scenes set around Mahan's son's birth, and Maureen O'Hara is very good in support, but it's one of the director's rare misfires. (2)