Freaks and Geeks, Our Town and "Ben Affleck" - Reviews #82 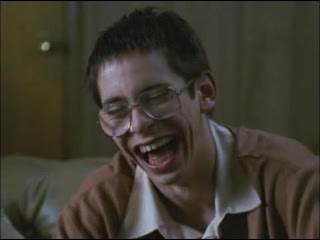 Freaks and Geeks (1999-2000) - A superlative comedy-drama from Paul Feig and Judd Apatow, set in 1980, about a pair of teen siblings (Linda Cardellini and John Francis Daley) and their respective groups: pot-smoking, rock-listening burnouts, and sci-fi-loving, bully-fearing nerds. It takes a little while to strike the right tone, but by episode five (Tests and Breasts) it's flying and the rest of the series is a triumph of complex character development, believable, inventive scenarios and brilliant jokes. It reaches a peak with the penultimate episode, The Little Things - as perfect a 44 minutes of telly as I've seen. The cast is excellent right across the board, from Linda Cardellini - as a straight-A student knocked sideways by the death of her grandmother; right onto the smoking patio - to brooding, manipulative James Franco and intense, permanently-stoned John Bonham-worshipper Jason Segel. Best of the lot is Martin Starr, who strolls off with every scene as the goofy, gangly, absent and permanently happy geek, Bill. His one-liners are a delight ("You look a little bit like my grandpa," Daley's Sam tells him; "Oh, is your grandpa super cool?" Bill replies) and his dance routine is the funniest ever. It makes Ricky Gervais's one in The Office look like Ricky Gervais doing it at that memorial concert.

The cast is filled with familiar faces doing fine work: Seth Rogen comes centre-stage towards the close, while everyone from Tom Wilson (Back to the Future's Biff Tannen), Jason Schwartzman, Ben Stiller, and pre-fame Lizzy Caplan, Shia LaBeouf and Percy Daggs III appear in supporting roles. I've found Apatow's subsequent films frustratingly flawed: funny and entertaining, but too long, too unfocused and loaded with unnecessary sentiment. Freaks and Geeks is the antithesis of that, deft, perfectly balanced and with genuine emotional weight beneath the supremely-strong comedy. Vote fans will be glad to know that it's the third highest-rated comedy series on IMDb (after Arrested Development and The Angry Video Game Nerd, since you ask) and incredibly that doesn't feel too wide of the mark. Fantastic credits sequence too - with each character summed up in two seconds flat. (4)

By the way, there's a terrific episode-by-episode guide to Freaks and Geeks on Alan Sepinwall's blog, which makes me feel hopelessly inadequate. 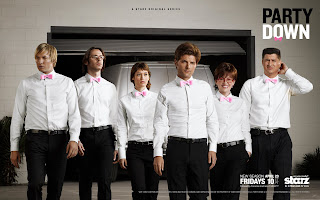 *MINOR SPOILERS*
Party Down (Season 2, 2009-10) - "Well it's good to keep all your eggs in one place where you can really keep an eye on them." Yes, it's the return of the cult catering comedy, a delicious mix of stunning scripting and inspired improv still boasting the series' twin virtues: that coruscating Adam Scott-Lizzy Caplan interplay, and Ken Marino, graduating from being whacked in the genitals to being horse-shoed in the back. Not that there's a weak link in the returning cast, which also spotlights Martin Starr (Freaks and Geeks' Bill) as the sardonic, possibly talentless writer Roman, and emoish Ryan Hansen (Veronica Mars' Dick Casablancas), whose ambitious idiot Kyle might just be about to make it big on the big screen. The material is incredibly inventive, subversive and offensive (yup, that good), but it's the syncopated, disjointed, offhand delivery - like nothing else I've ever heard - that really makes it. I had to hit pause a couple of times an episode, as I was just laughing too hard. I'm not sure this second season is quite as impressive an achievement as the first - its opening trio of episodes don't reach the usual stunning standards and Megan Mullally (pretty good value in Will and Grace) is a below-par replacement for Jane Lynch (herself a little annoying) - but its final two-thirds are just dizzyingly good: the home run, the flappers, the pot of sperm and Kyle's song. The absolute highlight of this run is the second play reading at Steve Guttenberg's house, as failed actor Henry (Scott) resolves to act his on-off girlfriend (Caplan) right off the stage. It's funny, dynamic and romantic, but underscored by hopelessness and frustration - Party Down to a tee. (4) 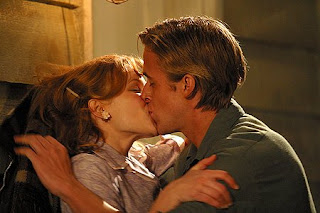 The Notebook (Nick Cassavetes, 2004) - An old-fashioned romantic drama, albeit with a framing device about dementia. The main draw is the strong period atmosphere and Ryan Gosling's appealing performance, though curiously he botches the dramatic climax. Rachel McAdams is a bit too modern, but she and Gosling are unquestionably good together. The bit with James Garner looking at pictures of his younger self in a photo album is magnificently confusing. (3)

See also: Gosling went on to star in Half Nelson, one of the best 10 films of the last decade. And Lars and the Real Girl, which is reviewed below. 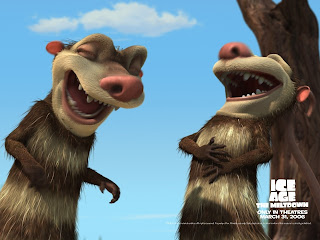 Ice Age: The Meltdown (Carlos Saldanha, 2006) - A real step up from the first, with better jokes, strong new characters (I'm thinking of the possums) and a muddled-but-well-meant message. (3) 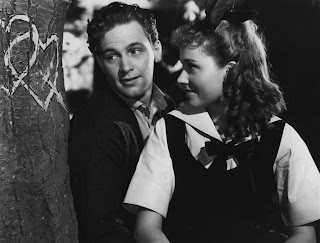 Our Town (Sam Wood, 1940) - A slightly disappointing adaptation of the Pulitzer Prize-winning play, too episodic and hampered by William Holden's callow, wooden performance (it wasn't until Sunset Blvd. that he moulded a real persona and sparked into glorious life), though there's a strong supporting cast, Martha Scott is absolutely terrific bringing her stage role to the screen and the final 10 minutes is so utterly stunning that you can forgive the rest of the film just about anything. The DVD is perhaps the worst I've ever seen. (3)

See also: To see the polar opposite of Holden's ineffectual showing in Our Town, check out his vital, muscular pyrotechnics in the showy '50s melodrama, Picnic. 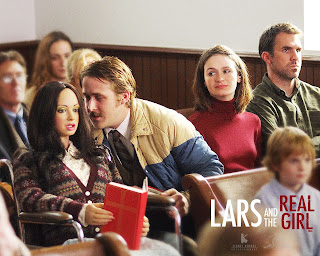 Lars and the Real Girl (Craig Gillespie, 2007) - Interesting indie about a lonely man (Ryan Gosling) who orders an anatomically-correct doll from the internet and treats it as his girlfriend. Not the comedy you might expect (there are only a couple of laughs), but a well-acted examination of how treating mental illness with compassion might just be the answer. (3) 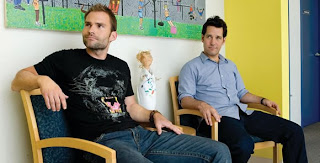 Role Models (David Wain, 2008) - A salesman in meltdown (Paul Rudd) and his party-hound colleague (Seann William Scott) are forced to mentor a role-playing game geek and a foul-mouthed boob-fiend - or else go to jail. The sweary kid gets a bit tiresome after a while (though his referring to all white people as "Ben Affleck" is a thing of genius) and the plotting is too formulaic, but it's very, very funny. Co-scripters Wain, Rudd and Ken Marino - who has a small role - later worked together on the superb sitcom Party Down. (3.5)

See also: Rudd plays another white collar worker on the brink in How Do You Know. 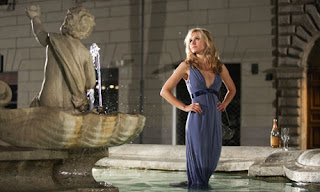 *CONTAINS ONE RUDE WORD AND VERONICA MARS SPOILERS, ESPECIALLY IN THAT LINK BELOW*
When in Rome (Mark Steven Johnson, 2010) - Well, this is... thin. And too preposterous to really serve as escapism. Though no worse than Three Coins in the Fountain. An art gallery curator (the fabulously talented Kristen Bell) pinches five coins from Rome's Fountain of Love and finds that the chaps who chucked them have all fallen madly in love with her. Including, it seems, the rugged ex-American Footballer with whom she's smitten (Josh Duhamel; go on Logan, kick his ass). And Danny DeVito. There's nothing objectionable about the film, besides its predictability and paucity of ambition - but it'll be a crying shame if Bell ends up being shoved into and sidelined by these standard, simple romcom roles, as she's a very special performer. And despite starring here, she has virtually nothing to work with. The film's few laughs come from SNL regular Bobby Moynihan, clearly crowbarred in to provide an Apatow vibe. I must be off now, as I have a sudden, unshakeable urge to visit New York's Guggenheim Museum. (2)
Posted by Rick Burin at 07:48