I've spent much of the past few weeks with my eyes glued to wonderful, wonderful Veronica Mars. 'Seen a few films though, so here they are, beginning with a couple of my favourites back from when I was feckless and 15: 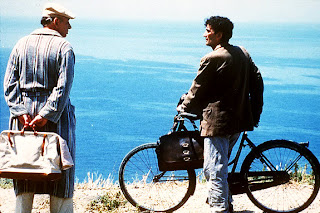 Il Postino (Michael Radford, 1994) is a sweet, low-key comedy-drama detailing the improbable friendship between famed Chilean poet Pablo Naruda (Philippe Noiret) and the simple Italian postman (Massimo Troisi) who wants his help romancing a girl. The pacing is a bit off and the film borrows too liberally from Cinema Paradiso, but the performances from Noiret and Troisi simply sparkle and the collision of genuinely funny character comedy and bleak, even tragic subject matter is wonderfully realised. (3.5) 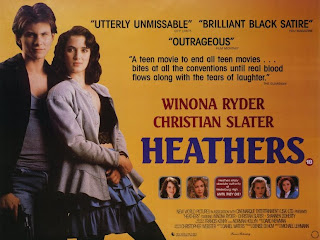 *MINOR SPOILERS*
Heathers (Michael Lehmann, 1988) - A couple of high school rebels dress up a series of murders as cultish suicides in this dark comedy. Perhaps you have to be sufficiently youthful to buy into it (I'm a carefree 27), perhaps I've been spoiled by Ghost World and Veronica Mars, or perhaps Daniel Waters' last word on teen flicks is just paling with age. Because Heathers isn't as sharp, spiky or amusing as I've thought on a half-dozen previous viewings. The gallery of extreme characters is there, there are some brilliant jokes ("Let's kick his ass!") and one-liners ("My teen angst bullshit has a body count"), and the soot-black premise is inherently snicker-some, but those virtues and a couple of strong lead performances from Winona Ryder and Christian Slater can't fully compensate for a confused viewpoint and a cop-out ending. Someone better go and tell the teenage me to shut up about it. (3) 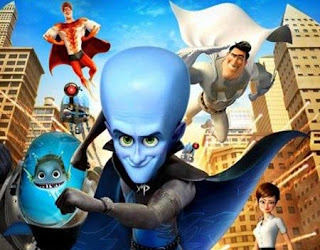 Megamind (Tom McGrath, 2010) - A supervillain with a big blue head (voiced by Will Ferrell) accidentally kills his superhero arch-enemy (Brad Pitt) and finds that he's now massively bored. So he decides to create a new nemesis, turning immature news cameraman Hal (Jonah Hill) into the formidable Titan. DreamWorks' spin on the Despicable Me template is unexceptional but very diverting, with decent animation, good jokes and notably effective voicework from Ferrell and Hill. A very pleasant surprise. (3) 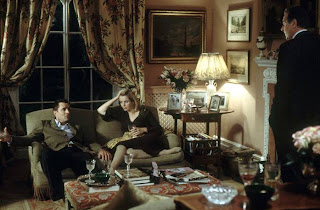 *I'VE QUOTED A RUDE WORD - PLEASE SKIP IF IT'S LIKELY TO OFFEND*
Separate Lies (Julian Fellowes, 2005) - A middle-class couple's picture-perfect marriage is torn apart by a mysterious death, in Fellowes' directorial debut. The story is too familiar (adapted from a 1951 novel), the dialogue is positively riddled with cliche (odd for Fellowes) and as the other man Rupert Everett gives what may be the most nondescript performance I've ever seen, but Tom Wilkinson and the incomparable Emily Watson are both extremely good, producing moments of emotional clarity and intimidating rawness amidst much tritely-scripted tedium. The moment in which Watson smashes a plate, screams and then bursts into tears is deeply affecting on an instinctive level and a scene where Wilkinson's stiff upper lip evaporates on account of some booze and he repeatedly barks "Fuck off" at his wife feels unexpectedly insightful. Terry Gilliam's Baron Munchausen, John Neville, also shines in a small part as Everett's father. The scripting of his second and final scene is so universal as to be almost banal, but his barnstorming sense of conviction lights it up. The subject matter of crime and guilt, the way in which the film abandons its thriller-ish concerns in deference to human drama and the presence of Wilkinson unfortunately recall Woody Allen's later Cassandra's Dream, though this is nothing like the career apocalypse that was. It's just a frustrating little film, loaded with overbearing symbolism (get a load of the Fellowes-does-Blue-Velvet opening), but partially rescued by a trio of impressive turns. (2)
Posted by Rick Burin at 20:04