Yes, I stopped watching films for long enough to watch a TV series. I've tried to keep the *SPOILERS* to a minimum, but there are a few in there (including photos of the Season 2 and 3 line-ups), so if you haven't seen Veronica Mars, do that without any further hesitation, then clicky back on over here. 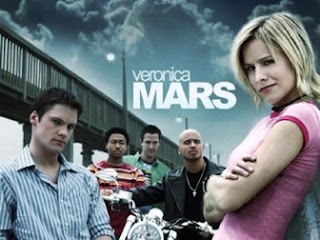 Veronica Mars - Season 1 (2004-5) - Aaaaaah... thump. That sound is my jaw dropping. What an utterly fantastic, incredibly engrossing, staggeringly entertaining series this is: a succession of superb mini-mysteries, wrapped up in one big series-long conspiracy. Veronica (Kristen Bell) was the golden girl of Neptune High. But when her best friend Lily Kane (Amanda Seyfried) was murdered, her sheriff father (Enrico Colantoni) became convinced Lily's internet age billionaire father was involved - setting Veronica against the wealthy in-crowd, including her boyfriend, Lily's brother Duncan (the disappointingly wooden Teddy Dunn). So our uber-cool outsider - and prospective PI like her pops - becomes a part-time hero-for-hire, dissing the deserved as she tangles with the Kanes, moneyed bad boy Logan Echolls (Jason Dohring) and biker gang leader Weevil (Francis Capra). Series brains Rob Thomas creates a fully-rounded universe in which it's a sheer joy to lose oneself and the performances from Bell and Dohring are just spectacular. Their chemistry, and Bell's rapport with Colantoni, is magical. With the caveat that I'm more versed in celluloid matters than small-screen, this is one of the best things I've ever seen on TV. (4) 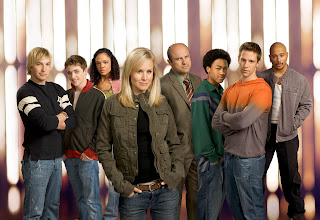 Veronica Mars - Season 2 (2005-6) - Somehow, this is every bit as good. No sooner has Veronica brushed the dirt from her clothes, changed boyfriends and got a job in a restaurant, than a school bus goes careering off a cliff and a former stuntman washes up dead with her name written on his hand, plunging her into a new mystery. The cases are still surprising, the character development is intelligent and the larger narrative is completely absorbing, while Bell, Dohring and Colantoni are reliably brilliant and each of the supporting players deftly drawn and given a distinct voice. Ryan Hansen, as the uncomplicated Dick Casablancas, is given greater prominence and is genuinely hilarious ("I'm not a smellologist," he memorably protests at one point), though his apparent behaviour in Season One does colour proceedings somewhat. His shy, put-upon brother Beaver (Kyle Gallner) also comes centre-stage, after sporadic appearances last series. Touching, laugh-out-loud funny and devilishly clever, this super sequel of a series is gloriously-written, flashily-shot and extremely well-acted, building to an unforgettable climax. (4)

Best episodes: Nobody Puts Baby in a Corner (#7) for Lamb's one moment of empathy, Never Mind the Buttocks (#19) for Weevil's return, Not Pictured (#22) for the Usual Suspects-style revelation of those two simple words. 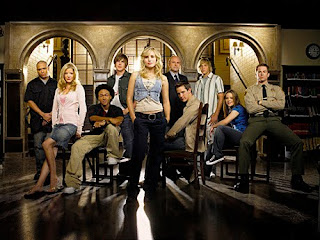 Veronica Mars - Season 3 (2006-7) - They said it couldn't be done. And they were right. This third series can't quite touch the first two instalments. The main problem is that, obsessing over audience figures and kowtowing to boneheaded execs, the creators tinkered with the format, changed their original plot and were then deprived of a (richly-deserved) fourth season anyway. That said, the series is still phenomenally enjoyable, picking up after an uncertain start in which the college setting takes a little getting used to. The performances are largely stunning, the mysteries remain intriguing and tricky to second-guess, and the balancing of comedic and dramatic elements is as sure-footed as ever, while incorporating some neat nods to the crime genre, including vintage Bogie noir, Charlie Chan and Nancy Drew. The larger crimes this time involve a series of rapes (a narrative continued from Season 2) and a college murder, with a third, reportedly mind-bending plot dropped in case it deterred potential first-time viewers. While one can bemoan the shattering of the familiar ensemble, some repetitiveness in the on-off central romance, a few loose plot threads and a distinct lack of closure, this remains a compelling and invigorating third helping: 13 hours more in the company of these remarkable characters. There's a massive hole in my life where Veronica Mars has been this last couple of months. (3.5)

Best episodes: Spit & Eggs (#8), in which the knot in our communal stomach gets tighter and tighter, Postgame Mortem (#13), which is just really sweet and nicely played, The Bitch Is Back (#20), in which we say goodbye, and Logan gets the send-off he truly deserves.
Posted by Rick Burin at 08:42