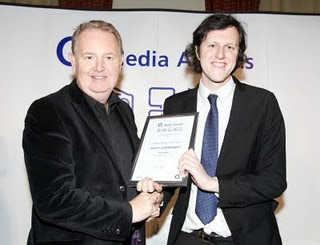 Diss me gettin' stiffykert from faymus orfuh G. P. Taylor. And actually I have great hair, so shut up.

Being a hopelessly self-aggrandising sort, I indulged in yet more of my endless boasting the other day. The reason: I was off to the O2 Media Awards for Yorkshire and the Humber, having been shortlisted in the features and digital categories.

Well, last night was the ceremony, held in the picturesque surroundings of York Racecourse. The sun was setting and we sat on the balcony watching hot-air balloons taking off from the field below, like something out of Northern Lights.

I didn't win the awards - Martin Smith and Graham Walker of The Star, Sheffield took top honours - but I did get two nice certificates with the words 'highly commended' emblazoned across them. "Ever the bridesmaid," people say when they see me, but only because I giggle a lot and wear a dress.

Rick Burin of the Harrogate Advertiser impressed judges with a portfolio that also demonstrated his ability to appeal to readers across different mediums, from print to those who sourced their information on-line. This was someone with a deft touch, a writer with the skills to make you read on and be glad you did. (Feature Writer of the Year - Highly Commended)

Rick Burin is a journalist who knows how to write for a digital audience and is just as comfortable writing blogs and Tweets as he is at filing copy for his weekly paper. He brings some refreshing personality and irreverence to his online writing which he demonstrated well in his live General Election blog. (Digital Journalist of the Year - Highly Commended)

Good, eh? Unfortunately I got there much later than I did in 2010 and had to go a bit early to catch the last train from York to Harrogate (22:11 - thanks Northern Rail!), but what with the hot air balloons, free food and people saying nice things about me, it was a really fine evening.

PS: I did say I'd tell you what food there was. Pilau rice and stir-fry veg, with granary bread.
Posted by Rick Burin at 08:22