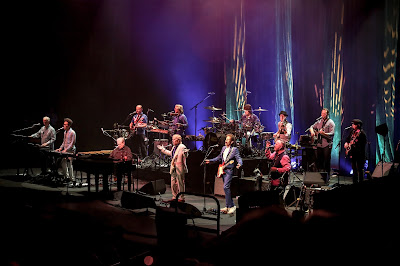 You know the legend – and all of it true – of the landlubber who defined the surf sound, who perfected the art of pop with Pet Sounds, then pushed the boundaries of the medium with the LSD-fuelled Smile, which looked to build on the pioneering spirit of the sonically sublime single ‘Good Vibrations’, but instead exploded before lift-off, incapacitating Wilson in the process. His lost decades, his stalled comebacks under the malign eye of psychologist Eugene Landy, and then the immobile, lightly-jowled, fragile figure of the silver-haired sexagenarian embracing his legacy with new records, a re-recorded and now complete Smile and a decade of sold-out shows around the globe. This year, his 75th, he’s marked the 50th anniversary of his masterpiece, Pet Sounds by playing it in full at concert halls all over the world, bookended by two lengthy, exuberant sets of “rare cuts and greatest hits”, that gleeful embracing of the mythology of a needle dropping on a double-sided LP embraced as fully on stage as in the PR bumf around the shows.

Friday’s concert at the Royal Albert Hall (accompanied, incidentally by one of the most apposite, beautiful graphics I’ve seen for a show) was billed as the last time he’ll ever play Pet Sounds live, and so how could I miss it? Especially as I work there.

Surrounded by a band of uncommon quality, it takes Wilson a little while to warm up, his voice on the first three tracks a little metallic and out-of-step, but once he’s in the groove, the first half is a treat. He takes the low notes and Matt Jardine (son of founding Beach Boys member, Al Jardine, who’s also on stage) cuts in to take over when it’s a song defined by Wilson’s extraordinary ‘60s falsetto, except for on ‘Don’t Worry Baby’, a song that I love so dearly, and for which Jardine Jr is allowed to take centre-stage, delivering a mesmerising performance. The other highlights are ‘Surfer Girl’, a song lent an impossible poignancy by the announcement that it was Wilson’s first and the yearning way that he now sings it, ‘Darlin’’ – lent a shimmering Motown feel by guest vocalist Darian Sahanaja (more often seen on keyboards), and an outrageous 10-minute jam on ‘Wild Honey’. The latter is dominated by Blondie Chaplin, part of the Rolling Stones’ touring band for a decade, who turns up midway through the first half with a Gibson, weird white plimsolls and some weird, stutter dance moves, and proceeds to take over the show. His guitar licks and saxophonist Paul Von Mertens’ solos make this far more than a night of nostalgia, probing the material and dynamically reshaping it for 2016, while Al Jardine – who looks like Jimmy Carter playing Richard Widmark – repeatedly takes the burden of the show on his shoulders. He was never touched by God’s hand, as Wilson was, but he’s remarkably fresh, clear-voiced and charismatic, carrying chunks of the show with his charm and talent.

The second half begins with Pet Sounds in its entirety, from the staccato innocence of ‘Wouldn’t It Be Nice’ to a short, heartbreaking ‘Caroline No’, via the deft, subversive majesty of ‘God Only Knows’, the simple profundity of ‘I Just Wasn’t Made for These Times’ and ‘Sloop John B’, transformed from the dirge of a thousand football chants back into one of the greatest pop songs ever written. I thought I could never hear it again as new, but this extraordinary night made it possible, its inclines steeper and more arresting, its foreshadowing of Wilson losing his mind ever more harrowing, and its repetition a mounting force that shook the walls of the Royal Albert Hall.

There’s a brief hiatus before we're treated to a tour of the band (who walk on one-by-one, each slightly increased ensemble playing a casual, well-oiled riff, like 'Smoke on the Water') then launched into the highlight of the night: Good Vibrations and then an incredible, incredibly fun run of early singles that’s like a medley in that they just don’t stop, but better still in that they’re all in full – and often fuller than on the record. A long, overpoweringly cheery ’Help Me Rhonda’ brings the Hall to its feet dancing, followed by a rambunctious ’Barbara Ann’, an escapist, relentless ’Surfin’ USA’ and then ‘Fun Fun Fun’, almost self-parodic in its naïvete and iconography (sun, surf and a T-Bird), and all the better for it. I’ve rarely experienced an atmosphere of such sheer, exultant joy: Wilson’s personal demons scuttling for cover in the midst of the celebratory atmosphere. 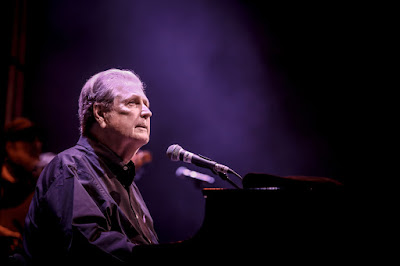 And then they’re back for a moment, as he closes the show by singing ‘Love & Mercy’ at his piano under a single spotlight, his fragility making it a little amateurish – as he coughs, misses a cue and then looks at his watch – but emotionally devastating. He wrote the song while trying to emerge from Eugene Landy’s shadow: it kicked off his first ever solo record, and gave a name to the recent Wilson biopic. He’s been back from the brink and he isn’t always all there, sometimes difficult to reconcile with the cocky, cherubic young genius who changed the world of popular music forever. Yet with the support of these cohorts and his old ones, who so transparently adore and revere him, he has wrestled control of his own legacy. As with Shane MacGowan and The Pogues, it was this mercurial songwriter – now broken – who made them anything at all, and now it’s the duty of the journeymen he catapulted into the stratosphere to carry him for a while. And they do.

It’s a deeply moving celebration of one of the 20th century’s greatest artists, but it’s more than that: it’s a show that’s vivid, alive and invigoratingly enjoyable: an exploration and reinvention of some of the finest songs ever written, with Wilson its centre and its beating heart, even if a part of him is still lost somewhere in the 1960s.

Thanks for reading.
Posted by Rick Burin at 08:54