The Nicholas Brothers, Arrival and the sound of silence – Reviews #248

Plus: Jimmy Joyce's laugh riot and a load of rubbish starring Ryan Gosling. 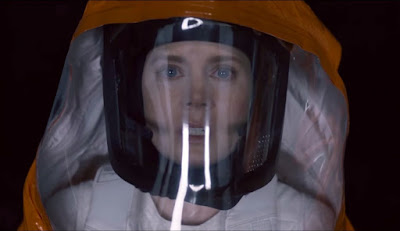 CINEMA: Arrival (Denis Villeneve, 2016) – This cerebral, mind-bending and emotionally devastating sci-fi film takes a while to reveal itself, but absolutely floors you when it does.

After vast, charcoal-coloured alien pods appear at 12 spots worldwide, the US army sends linguistics professor Amy Adams − still reeling from the death of her daughter − to the one hovering in Montana, tasked with finding out what the visitors want. With the help of good-natured physicist Jeremy Renner, she makes contact and begins to decipher the inky circles of text being cast into the air, as the world loots and panics.

It opens like Up (see #26 in my all-time Top 100), with a breathtakingly beautiful, vividly universal montage of Adams' life with her daughter, then threatens to fall away, as you wonder if it will have anything to it at all. That's a false impression: Villeneuve is zoning in slowly but unerringly on the film's emotional centre, and when that grabs you, you can't get loose.

His movie blends the literate, sun-dappled nostalgia of The Tree of Life, with Gravity's sense of nervous wonder and Moon's freaky but human edge, but it meant a lot more to me than any of those films, and it's still commandeering my brain now, almost a day later, with its rich tapestry of emotions, Adams' characteristically immersive performance and a reveal that you won't forget in a hurry. Without giving anything away, you realise that the ordeal awaiting her is really what life is.

As La La Land and Certain Women aren't on general release here until 2017, I think we can comfortably call it the movie of the year. We never did learn why Portuguese is different to the other romance languages, though. (4) 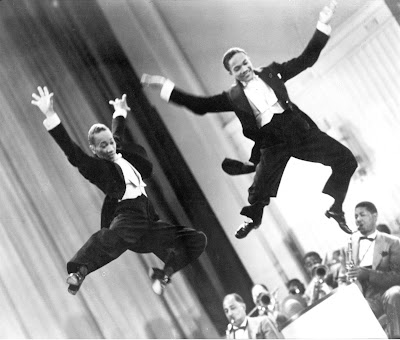 The Nicholas Brothers managing to steal the limelight from Cab Calloway's trousers.

CINEMA: Stormy Weather (Andrew L. Stone, 1943) – The last five minutes of this film briefly made me forget President Trump. They are that bloody good.

I've lost count of how many times I've watched this film over the years, though this was the first time on the big screen, with soul singer and Wire actor Clarke Peters choosing it (via a fascinating if confusing intro) for his 'screen epiphany', as part of the BFI's Black Star strand.

For all its flaws, it's unmissable entertainment: standard studio escapism but with an all-African American cast, including many of the leading jazz, blues and dance stars of the era. The comedy is dated, some of the racial elements are wince-inducingly offensive (black female dancers with golliwog caricatures on the backs of their heads, anyone?) and the plot is just a frail thing to hang the numbers on – as 65-year-old Bill "Bojangles" Robinson vaguely romances smoking hot Lena Horne, 26 – but this was a relatively positive, modern and aspirational film for black audiences (previous attempts, Hallelujah! and Cabin in the Sky, were superbly done but dripping with patronising, cod-Biblical archetypes), and the music is simply sensational.

There's Fats Waller doing a playful Ain't Misbehavin', Horne performing a succession of standards – including a breathtaking version of the title track – Bojangles belying his age with some fine hoofing, and the pièce de fucking resistance: Cab Calloway's exuberant Jumpin' Jive, which segues into a Nicholas Brothers routine that's nothing short of the greatest dance number of all time, according to me and – more significantly – Fred Astaire.

It's almost like minority communities contribute a huge amount to society, and to the arts which make living worthwhile, even when they're being treated like shit. (3.5) 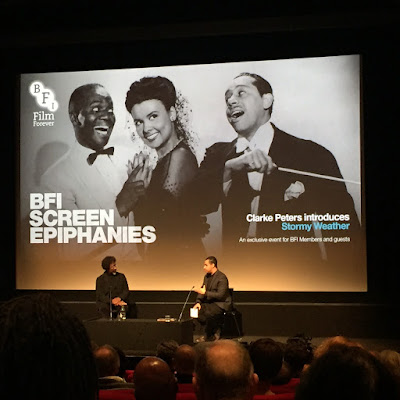 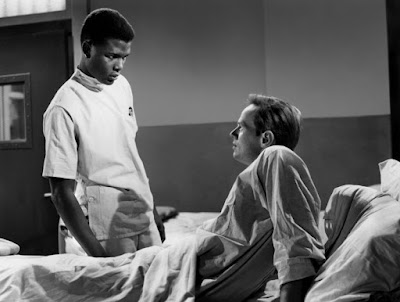 CINEMA: No Way Out (Joseph L. Mankiewicz, 1950) – What a film to see today*: an uncompromising, perceptive and prescient film about a blonde, furious, self-pitying white supremacist (Richard Widmark) railing against elites and PC language as he turns the life of a black doctor (Sidney Poitier) into a living hell.

Mankiewicz's film – released just three months before his All About Eve! – is of its time in terms of the terminology and studio trappings, but remarkably relevant and resonant in its presentation of racism as a social disease afflicting the disenfranchised, with some typically fine dialogue, and standout performances from a credible Poitier (in his screen debut) and a silkily charismatic Widmark, whose ability to turn resentment into race hate chillingly foreshadows this fucking binfire of a year. (3.5)

*it was the day of Trump's victory 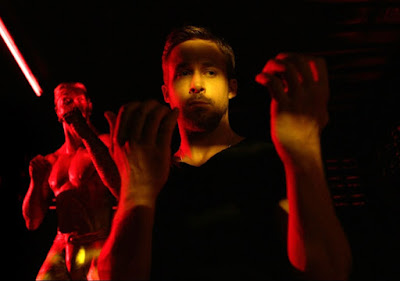 Only God Forgives (Nicolas Winding Refn, 2013) – Appallingly pretentious, plot-free wank. Like Wong Kar-Wai directing a story by a drunk guy at a party who won't leave you alone. The music's gorgeous, though. (1)

And here's a review of Ghostbusters from 7 August, as apparently I never put it up on the blog:

Ghostbusters (Paul Feig, 2016) – I'm so glad this film exists. The decade has seen a rebirth of mainstream films dominated by strong female characters – from Gravity to the magnificent Mad Max and Star Wars – and rebooting a boys' toys concern as a feminist buddy movie was about the only thing that could have dragged me into the cinema to watch a Ghostbusters remake.

The direction of cinema shouldn't be determined, though, by one film. If, as an action comedy fronted by women, this one had turned out badly, that doesn't mean the whining, furiously wanking teenage sexists were right, it just means that lots of movies aren't very good and this would have been another one.

It's actually pretty good, though. The central dynamic is refreshing, its adapted iconography can be spectacular when not tying itself up in smug, post-modern knots, and there's a fantastic character in Holtzmann (Kate McKinnon), a scientist, weapons manufacturer and all-round badass, with an unstudied cool, an infectious sense of silliness and at least one superb action sequence. Most importantly - and enjoyably - she isn't a pubescent masturbation fantasy or a manic pixie coming to save the main character, she's a proper woman, a self-sufficient person defined by herself and her job, who spends her time inventing, hanging with her friends and shooting ghosts.

My issue with the film is that it doesn't feel finished – the last movie I saw that came off as this slapdash was The Green Hornet – with a dull, hackneyed plot, a dire villain and a script that gives Kristen Wiig almost nothing good to do, while forcing the 'the busters to regurgitate reams of dialogue consisting only of scientific and supernatural jargon. What's the point of that? As vengeful janitor Rowan, Neil Casey is a desperately uninteresting foil, and Chris Hemsworth's idiotic secretary - while sometimes quite funny in himself - overbalances the movie. The worst performance is probably by Dan Aykroyd, who does an incredibly dated, unfunny bit about New York taxi drivers who won't take you where you want to go (diddums, did the millionaire not get to his next engagement quickly enough?), but at least it's only a cameo.

I'd also quibble with Feig and co-writer Katie Dippold's decision to hold a pivotal action sequence at a rock show: I'm not very easily offended, but I presume everyone else was also just thinking: "I really hope there isn't lots of carnage, as lots of people were murdered at the Bataclan less than a year ago." There isn't much. Just the CGI gubbins that fits this film to bursting.

An almost incomprehensible post-credits sting sets up the possibility of a sequel. I hope both that it happens and that they iron out all the wrinkles in the script before they make it, because there's real potential here: not just to stick it to the fucking twats on the internet, but to do something pretty special. (2.5)

Dubliners by James Joyce (1914) – Have your heart broken every eight pages by James Joyce's most accessible work, which was two years in the writing and took a further seven to navigate its way past nervous editors who balked at its sexual frankness. Rooted in a repressed city that finds escape only in booze and self-destruction, it's a collection of 15 short stories: 14 ironic, distinct and yet stiflingly similar, and the final one, The Dead, perhaps my favourite piece of writing: a portrait of the artist as a young man effortlessly evoking nostalgia, pity, shame, sexual longing and the fragile impermanence of existence. Following mere fragments of prose that distill the perfect essence of a greater whole, the 50-page closer is a work of clarity, genius and extraordinary openness: haunting and heartbreaking. Dubliners is bleak and sometimes difficult, its vernacular specific and its frame of reference obscure (thank goodness for Penguin's lengthy notes section!), but its lack of linguistic deconstruction, its universality of themes, and Joyce's compassion and patience with the human condition make it easier to take to – and understand – than many of the books that followed. It took me a while to read it (and this was my second go round!), but it's both a remarkable snapshot of a time and place, and an unforgettable commentary on humanity's capacity for self-harm, with a final chapter that's gorgeously lyrical and chokingly sad. (4)

See also: John Huston's adaptation of The Dead is one of the great book-to-film translations, and was at #12 in my list of all-time favourite movies. I'll revisit it at greater length some time soon. 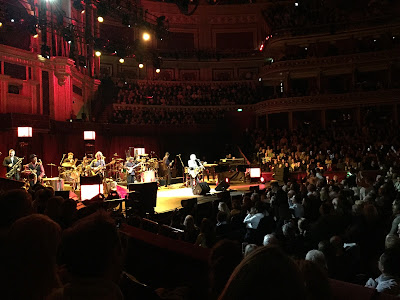 Paul Simon at the Royal Albert Hall (Tue 8 Oct 2016) – One of the best 10 shows I've seen (and I've been going to gigs for 23 years now, and work at a music venue). Simon's voice has held up better than anyone else's of his generation − with the possible exception of James Taylor − and this show, which ran to over two-and-a-half hours without an interval, was a stunning, moving, exultant tour of one of the finest back catalogues in popular music.

He gave us much of Graceland, that seminal 1982 record infused with African rhythms, spotlighted greatest hits from 'Still Crazy After These Years' to 'Me and Julio...', their melodies tweaked and modernised yet still timeless, and drew on the Simon and Garfunkel years a full seven times, with highlights that included a poignant 'America' (I woke up the next morning and realised we've never needed it more), a sing-along take on 'The Boxer', and a delicate, heart-stopping, acoustic 'Sound of Silence' which rendered that unique and magnificent song utterly fresh.

Dylan is a contrarian and McCartney a crowdpleaser, but Simon's something else: a man at peace with his legacy who'll give you the hits in a new way, and knows you'll love it. The show brought us to our feet and dancing countless times, prompted four standing ovations and included both the best ('Stranger to Stranger') and worst ('Wristband') of his current record, but it was his haunting hymn to serenity and sorrow that really took my breath away. (4)

Thanks for reading.
Posted by Rick Burin at 15:28