Double-bill: animals who are a bit like humans – Reviews #247

Come marvel at my tenuous links. 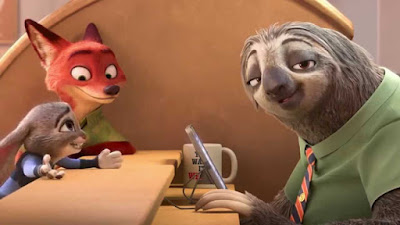 The story sees the world’s first ‘bunny cop’ (voiced by Ginnifer Goodwin) pitching up in the big city with stars in her eyes, and armed with ambition, idealism and a canister of fox repellent, just in case. At first she's sidelined, but when a doting father (and otter) goes missing, she manages to wangle the case and stumbles upon something big – though there's only a cynical con artist (Jason Bateman) to help her.

I loved the specificity and comic, Kaufmanesque daring of the sloths routine, the Cloudy-ish running gags about viral videos and oddball supporting characters, and the fact that the Godfather spoof isn’t the joke in itself (typically accompanied in theatres by a forced laugh that says, “Yes, I do recognise what you are referencing”) but the springboard for all manner of absurdity and surrealist hilarity.

Zootopia (retitled and redubbed in Britain as Zootropolis because a nation that votes for Brexit is too stupid to have read Thomas More) is just a sheer delight. It zones in on the virtues of co-directors' Byron Howard and Rich Moore's previous separate hits – the rather trite though nevertheless modern Tangled, the zippy, meta but minor Bolt, and the warm and hugely inventive Wreck-It Ralph, which still assumed a little too much knowledge of arcade games – while snipping off the padding and easing off on the patronising.

The jokes are superb, the action's better than in almost any other animated movie (the exception is Kung Fu Panda 2, a visually sumptuous, frenetic feast of a film), and its balance of story, character and wider resonance – as well as the freshness and distinctiveness of each – kicks it way above most of the fare we've been fed by Disney since the pioneering spirit of its early years gave way to mawkishness, formula and safety.

The Fly (Thomas Neumann, 1958) – Cronenberg's gruesome, glorious 1986 remake is pure body horror, but the original version of The Fly begins more like a murder mystery, as Patricia Owens admits to killing her beloved husband – scientist David Hedison – prompting his lovelorn brother (Vincent Price) and a smart but sympathetic cop (Herbert Marshall) to try to get some answers, largely just by asking her, which prompts a lengthy flashback. You'd expect Price to play the scientist, but before this film he was barely associated with horror; afterwards, of course, he did little else, working with the likes of Roger Corman and William Castle on a slew of midnight movies, and doing as much as anyone to define and then refine the genre.

The Fly is sadly rather pedestrian for the most part, and far too talky, but its premise is ace, its ending is oddly affecting, and its two horror highlights – a pair of ingenious, shocking scenes, building on slow burns and blessed with very '50s optical effects – are utterly fantastic. As a companion piece, I'd heartily recommend Joe Dante's Matinee, which features the film-within-a-film Mant!, a referential, reverential and perfectly-pitched send up of this film and its ilk. Incidentally, this film was written by novelist and screenwriter James Clavell, five years before The Great Escape, and around the time Steve McQueen was starring in a low-budget horror that makes this one look like Rosemary's Baby, The Blob! (2.5)

See also: I've reviewed other Vincent Price horrors elsewhere, including The Fall of the House of Usher, The Pit and Pendulum, Tales of Terror and The Masque of the Red Death, all directed by Roger Corman.

Thanks for reading.
Posted by Rick Burin at 12:57