As good a description as any for Kelly Reichardt's mind. Four more films from this year's fest: Film 10: The Fury of a Patient Man (Raúl Arévalo, 2016) at Picturehouse Central − A morally complex, hard-as-nails Spanish thriller from debuting director Raúl Arévalo about the relationship between a notably sexy mother (Ruth Díaz), her violent ex-con husband (Luis Callejo) and her quiet new boyfriend (Antonio de la Torre). It starts in mysterious, decontextualised fashion, then reveals its hand gradually, with particularly superb use of sharp implements and even better use of sound. (3) 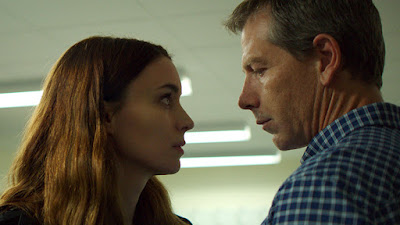 This belated opening up of the hit stage two-hander Blackbird makes for a flat, doggedly mediocre film, as the title character (Rooney Mara) turns up at the office of Ray (Ben Mendelsohn) to confront her past, but finds only slack writing and bad cinematography.

Mara's pretty good (if not at her dazzling best), but this functional, boringly-shot film is merely vague when it should be ominously, piercingly fascinating, recalling such drab, uninspiring homegrown melodramas as Match Point and Separate Lies.

I'd really like to see the play, which is apparently set in one room and packed with fractured, singularly rendered dialogue, but if that's true then this adaptation has incinerated its raison d'être, like those Shakespeare-for-kids books that keep the recycled plots but chuck out all of his words. (1.5) 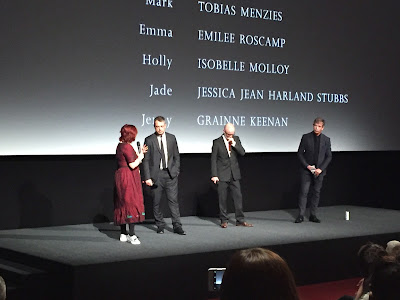 Guests: An introduction from Andrews, Mendelsohn, Tara Fitzgerald (who plays Mara's mother), writer David Harrower and various crew. The main players returned for a post-film Q&A − I would have loved to see the movie they were describing. 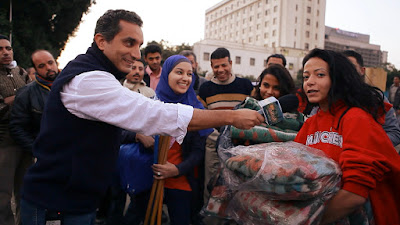 Film 12: Tickling Giants (Sara Taksler, 2016) at Vue West End − A wonderful documentary about 'the Egyptian Jon Stewart', Bassem Youssef, a heart surgeon who becomes a TV satirist and national hero following the Arab Spring. As the political climate festers and the military intervene, his potshots at authority start to divide the revolutionaries, leading to protests, boycotts and threats, but he and his staff remain unyielding – at least at first. After one of the writers says she doesn’t care about the outcry, a colleague asks if she’d care to provide a more diplomatic answer. “Yes,” she replies. “I don’t give a shit.”

I expected Tickling Giants to be insightful and powerful, but not such fantastic fun as it is, and if you’re worried that Egyptian humour won’t translate across language and cultural barriers, you couldn’t be more wrong. Youssef is simply hilarious, beginning as a rather nervous Stewart clone, but quickly establishing himself as a ferociously funny and fearless comedian, with a fine line in irony, righteous anger and foul-mouthed rejoinders. This marvellously entertaining, inspiring and yet troubling film is liberally sprinkled with clips of the show (entitled ‘The Show’), fascinating behind-the-scenes footage (as the protests begin to take their toll) and animation designed by one of Youssef’s collaborators – which is distinctive if not as entertaining as what surrounds it.

It’s one of the highlights of the festival so far: an intimate portrait, state-of-the-nation address and uproarious comedy all in one. (3.5) 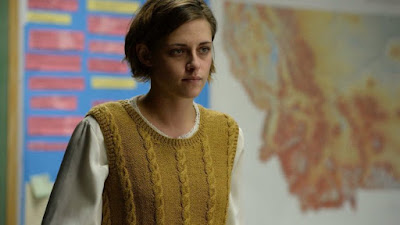 *VERY MINOR SPOILERS*
Film 13: Certain Women (Kelly Reichardt, 2016) at Hackney Picturehouse − Kelly Reichardt has such a unique way of looking at the world, at humanity, and this triptych of short stories is an instant classic: a rich, tactile, beautifully-edited film that's brilliantly low key in its performances, its humour and its sumptuous, washed-out, finely-grained cinematography.

We meet four great female characters across three stories, the final (and longest) of which is a simply stunning achievement. There's Laura Dern's patient lawyer dealing with an increasingly erratic client, hard-working but harsh mother Michelle Williams (shades of Dorothy McGuire in A Tree Grows in Brooklyn) visiting a dementia patient with her husband (and employee), and then Native American stablehand Lily Gladstone happening upon knackered lawyer Kristen Stewart, and finding her life suddenly flooded with light and meaning.

Reichardt tells each story with simplicity, economy and endless empathy, while serving up – with a minimum of fuss – a feast for the eyes and ears: weathered snow crunching underfoot, a torrent of grain cascading into a barrel, and pioneers' sandstone lifted from the ruins of an old schoolhouse, and laid out in fudge-coloured chunks. There are no universal themes tying together the three Maile Meloy stories, nor a universal approach in their worldview – the first is fatalistic, the final one surprising and the middle chapter somewhere in-between – but each is deftly sketched, impeccably acted and comprised of handsome, static shots. The title seems to have a double meaning, articulating both the women's steadfast certainty and the barbs aimed at "certain women" who act in this bold, unapologetic way.

It’s a film of unwavering, unflinching honesty and quiet poetry – from Williams’ piercing, scarcely likeable performance to that shot of a rogue truck tumbling off the road – a gift from a filmmaker at the very peak of her powers. (4)

Thanks for reading. The fourth and final part will round up five films from the last weekend, including a fine foreign picture and a homegrown disaster, and I'll talk a little about the festival as a whole.

All the opening lines are taken from the festival trailer, every word of which is etched into my brain forever after seeing it 20 times!
Posted by Rick Burin at 08:46