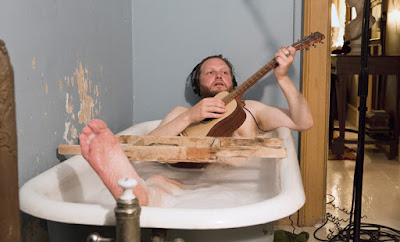 All I knew about Ragnar Kjartansson before this glorious exhibition was that he once got American indie heroes The National to play their song Sorrow over and over again for six hours. Feats of endurance are a recurring theme during the Kjartansson retrospective at the Barbican, but these aren’t just stunts, they’re part of a body of work that treats popular culture with both reverence and scorn (often simultaneously), deals with deadly serious subjects like familial strife and mortality with a beguiling playfulness, and manages to tread that line between being dully prescriptive about what we take from the work and seeming to be about nothing much at all.

It begins with an installation called Here by the Dishwasher: Memorial for a Marriage, in which we stroll between 10 unkempt troubadours strumming guitars on crumpled beds, as in the background a soft-core sex-scene featuring Kjartansson’s parents is projected onto the wall: they’re actors and he was conceived during the projection of the movie. This performance is eight hours long, and the sound from this and every other room – most simply walled off with curtains – bleeds from one to the next. It’s not necessarily intentional, probably a happy accident, but it gives an added feeling of coherence and continuity to his ruminations and investigations. 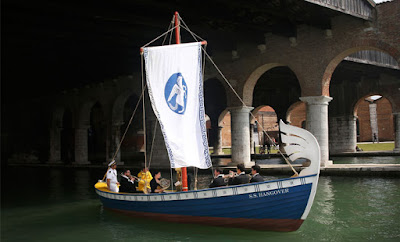 The show mixes films, paintings, live performances and the debris of the artist’s life (from beer bottles to notebooks) to tell its story. There are diversions, including a soothing film showing two-and-a-half-hours from a six-month project in which a brass band on an old-fashioned wooden boat simply moved steadily around a picturesque Icelandic canal, playing music for whoever gathered, but most of the work is more complex and ambitious.

There are miniatures of Kjartansson’s sets for an hour-long opera with no performers, in which he embraces the visceral, comforting escapism of that world, without the challenging, cerebral bit – touched by genius, close to God – that allows the artform to transcend its setting. There’s a charming, funny monochrome film, worth of Truffaut, that examines childhood and children’s attitude to mortality and the afterlife, by the artist giving some kids on a summer camp a tour of a cemetery, dressing as Death. They’re slightly giddy from being both amused and a little scared, and flit between observations and objections. “Are you Satan?” asks one. “You are God’s enemy,” says another. “You’re not Death, you’re an elf with a stick,” contends a third. 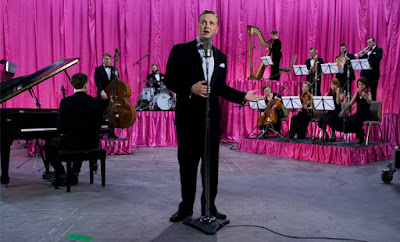 A film upstairs has the chameleonic Kjartansson as a ‘50s-style crooner in a tuxedo, amidst a garish pink curtain (which also surrounds you, in the Barbican’s staging): his idea was that by extending the performance interminably, he could transform it from something transient into something eternal and solemn, like a mass. But by singing only the melancholy mantra, “Sorrows conquers happiness”, he also subverts the banality, transience and vapidity of easy listening, while investing the film with incentives to keep up watching: though the text is identical, the music ebbs and flows, as the string and brass sections periodically drop out and come back in. 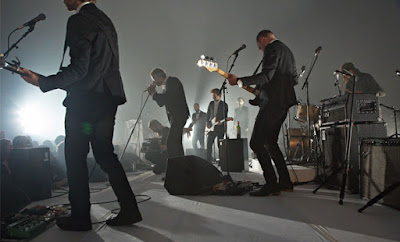 When the artist requested that The National play Sorrow for six hours, he was essentially asking them to pay homage to his own artwork, and once more there are mini-dramas and triumphs: the effect like a documentary (in its depiction of the chemistry between the band members and with their audience) and also a scripted film, with a cycle of narratives. The bit I watched saw the band attempting to pace themselves, as the drummer tended to his hands, then – once he’d picked up the sticks again – unable to stop themselves crescendoing amidst crashing cymbals and furious fretwork, no matter how many more hours of this they had left. 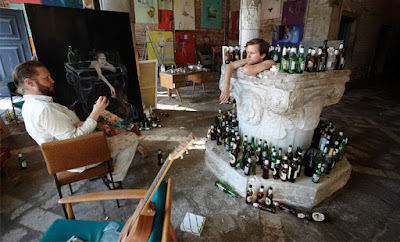 A couple of the exhibits are less compelling: endless paintings of Páll Haukur Björnsson (done for the Venice Biennale in 2009) contain only a couple worth remembering, while the room showcasing his attempts to play at being an Impressionist is rather redundant, but the latter is next to one in which four Ragnars of different ages stage a row with his mother, where she spits in his face. The text is brutal if satirical, but the emotions that underscore it – the bond between mother and son, their mutual trust and status as co-conspirators, toying with art – are a vivid counterpoint, and the action itself is in flux both thematically and stylistically: the first is furthest away, the second in close-up and with more advanced editing; in the earliest video they’re laughing and joking, in the next it’s more Expressionist, the third is realistic, then the last slightly offbeat and absurdist: Ragnar’s lacquered hair and deadpan expression like something from a mid-‘00s indie. 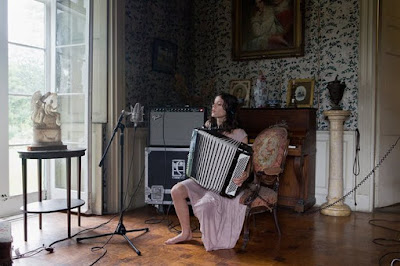 The piece de resistance (or "stykki de viðnám" in Icelandic), though, is The Visitors, a gorgeous meditation on music, communality and individuality, as eight musicians in separate rooms of a historic building some miles from New York perform a song together, build once more around a single mantra, this time heartbreakingly beautiful: "Once again, I fall into my feminine ways.” I experienced it walking round and round, as in turn each screen came to life, and then each performer began to make music, accentuated as you reached them, from the professionalism of the drummer to the pianist’s classical flourishes, the artist himself crooningly in a bubble bath (a slightly glib gesture) and, best of all, the accordion player singing in an unaffected, Joanne Newsom-ish squeak. It’s an absolutely devastating, exultant and euphoric piece of work: a manifesto, memoir and concert film that you experience in a new way each time, and in a completely unique way based simply on where you stand and where you walk.

That unique, accessible but also labyrinthine, multi-layered work is emblematic of this stunning show, which gave me a lot to think about while slinging my emotions around the Barbican Centre. (4/4)

Thanks for reading.
Posted by Rick Burin at 17:56