Jane Wyman, A Confederacy of Dunces, and the lost review - Reviews #234

I had a week off, so I have quite a few reviews to put up. Here's the first batch: 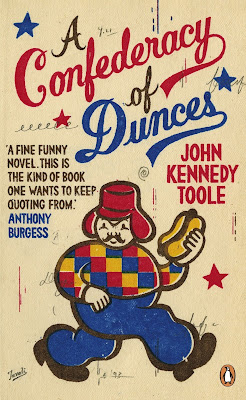 A Confederacy of Dunces by John Kennedy Toole (1980) - This near-mythic helping of acrid Southern Gothic is at times almost wilfully offputting, as its verbose, over-educated and oversized hero Ignatius J. Reilly gorges himself on rank hot dogs, unveils yellowing, stained bed sheets during a workers' revolt, or updates us for the thousandth time about the status of his "valve" - the God-given contraption in his stomach regulating his chronic flatulence. But it's also hypnotically original, full of virtuosic passages of bilious wit, as Ignatius and a gallery of hysterically funny supporting characters go almost aimlessly about their daily business in a vividly-realised nightmare of New Orleans, before you realise that Toole has been shuffling everyone expertly into position for a quite brilliant finale. Jones, the sarcastic, jive-talking black "vagran" who takes an interest in Reilly, would rightly walk off with just about any other book, but this isn't any other book: often revolting and sometimes repetitive, it's also a unique artistic vision, with a mesmerising anti-hero, that has to be experienced to be believed. (3.5) 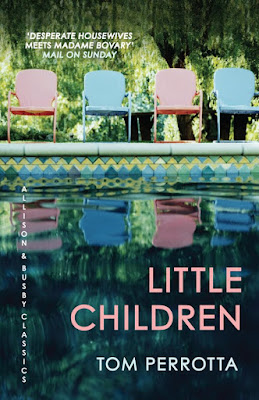 Little Children by Tom Perrotta (2004) - A modern masterpiece that entirely transcends its suburban trappings, becoming universal through its specificity, because its characters aren't broad and aren't archetypes, no matter how much they may seem to be at first. From a jock-turned-stay-at-home dad to a feminist Madame Bovary apologist and a sarcastic child molester, this portrait of overgrown children, with little children either in tow or in their eyeline, gives every character their due, as each is crushed or raised high by their flaws and failings. One of Perrotta's gifts is his compassion for characters that you don't really like, and another is his ability to shift seamlessly from sarcasm to sentiment, and both are in ample evidence here. He writes with such pace and grace, and such alarming, beguiling honesty, that he changes the way you see the world. (4) 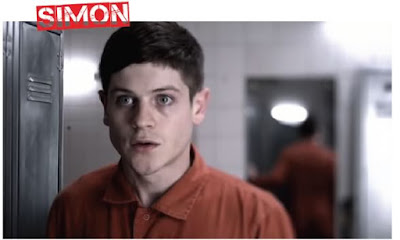 Misfits: Season 1
Misfits: Season 2
Misfits: Xmas Special
An antidote to morality plays, Marvel movies and just about everything else, this high-concept comedy-drama about young offenders getting superpowers can genuinely be called great: acerbic, inventive and ironic, with a smart, sweary and avowedly juvenile sense of humour that's all its own, but also invested with a humanity that's expressed in unusual and surprising ways. You get the feeling that writer-director Howard Overman came up with some of these storylines simply because he thought they'd be funny, then couldn't help himself dealing with them seriously and empathetically (that's how the best episode of Freaks and Geeks, 'The Little Things' came into being), and the results are overpowering. Just when you think it's beginning to run out of ideas near the end of Season 1, it properly explodes into life, leading to a second series that's even better. That's dominated by a storyline about recovering social cripple Simon (Iwan Rheon) which provoked that back-of-the-throat feeling of nostalgia and complete immersion I haven't had since finishing Veronica Mars, though Robert Sheehan's tousle-haired, perma-quipping and unfailingly inappropriate Nathan is also a continuing joy. (4) 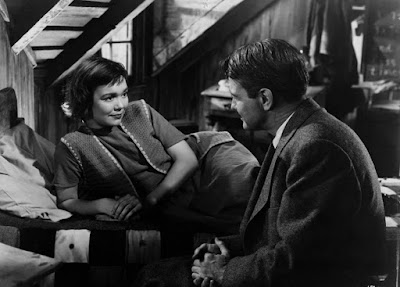 Johnny Belinda (Jean Negulesco, 1948) - Dark, near-classic Americana (though set in Nova Scotia) that blends all sorts of influences, from folksy dramas about rural doctors, to a pair of classic late silents: The Wind (a thematic cousin) and Lucky Star (a spiritual and aesthetic big brother). It's best known, though, for Jane Wyman's performance as the mute, brutalised heroine, Belinda, which won the late-developing actress, and first wife of Ronald Reagan, the Best Actress Oscar. And she is transcendent: gentle, steely and extraordinarily appealing as she blossoms under the tutelage of sympathetic doctor Lew Ayres.

I'm a huge fan of Ayres, particularly his performance in Holiday, as a dissolute, self-loathing playboy, but here his turn − though lit by moments of brilliance ("Forgive me, I didn't know") − strays a little far into corn, with many of his line readings given in identikit fashion, and the slow-paced delivery enforced by his need to translate for Wyman occasionally tips over into parody. It's probably only noticeable because Charles Bickford and Agnes Moorehead are so damn good: Bickford giving surely the best performance of his erratic career as Belinda's loving but quick-tempered father, and Moorehead once again taking a little while to adjust to, since her work − given direction by the young Welles − was bigger and more extreme than most actresses of her generation, at first emitting the whiff of melodrama, before you realise that actually there's a hell of a lot more going on here.

As well as boasting three truly great performances, it's also notable for its simply empathy and for some of the best photography of the decade. Ted McCord shot East of Eden for Kazan, but did most of his best work in black-and-white: the sleazy Flamingo Road, Huston's matchlessly evocative Treasure of the Sierra Madre, and this film, McCord busting the rule of thirds as he throws the horizon up to the top or usually down to the bottom of the frame, and finds astonishing compositions: Wyman pumping water as inky branches stretch into the blanched sky; the heroine writing up a tree, as her father watches her in the distance; or McCord sticking his camera inside the shop, fixed on the gift, as Ayres buys his protégé a veil. Images you could hang in your living room.

Not everything's as great: the shopkeeper is made-up as ridiculously as Lee J. Cobb in Golden Boy, Ayres' speech about "intuition" undoes some of the film's good work by suggesting that people who can't speak aren't really like the rest of us after all, and the denouement is somehow unsatisfying, not giving its heroine the chance to save herself, which for so long felt like the point of the film (the weird trailer, incidentally, neglects to mention the basic premise at all!). All this set against an isolated world that is intriguing and atmospheric, but also not entirely convincing, and peopled by supporting characters too underdeveloped to really connect.

It's imperfect then, certainly, but there's artistry here in both the acting and the cinematography that's often breathtaking to behold, as well as a human story that despite its ultimate shortcomings is extremely powerful and moving. Wyman's performance is so genuine and so far from the mannered, Oscar-ogling fodder I thought it might be, that I felt almost ashamed, as well as completely blown away. I always assumed that Dorothy McGuire's performance in The Spiral Staircase was an unassailable highpoint in the 'mute heroine' genre, but now I'm not so sure. (3.5) 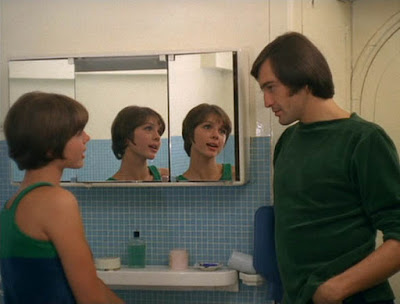 La collectionneuse (Eric Rohmer, 1967) - Eric Rohmer's Six Moral Tales don't have a moral lesson (that would be terrible), but instead are six variations based on F. W. Murnau's classic silent movie, Sunrise - about a protagonist caught between two lovers. That protagonist narrates the story, so the tale is about their personal morality (or lack of), and how that informs their actions.

The fourth of the series (though released before #3, My Night at Maud's) is oddly nasty and vitriolic, as a smug art dealer (Patrick Bauchau), holidaying with a vindictive painter (Daniel Pommereulle), tries to explain away in voiceover his burgeoning obsession with the promiscuous Haydée (Haydée Politoff), amidst the hills and beaches of sunlit St Tropez.

Politoff is perfect, and so is the seductive, sensual yet clear-headed way that Rohmer uses her, but the film's central story, at times ironic, affecting and entrancing, is often hard to watch, as the two male protagonists − and another who enters later and can't act − are so misogynistic and cruel.

Those problems come to a head in a final act that makes you so hostile to Bauchau's character, playing a weird sexual mind game with Politoff, that it switches off our in-built affinity with a narrator, though the final scene is so brilliantly conceived that you can't help but be crushed by it.

Rohmer's second full-length feature and his first of any kind shot in colour (superbly by a debuting Nestor Almendros) is a really interesting film: philosophically dense yet filled with red herrings, but so difficult to warm to that I can't class it among his best. For all that, I won't forget Haydée in a while. (3.5)

See also: The first two entries in the series are reviewed here and include the best film I've seen this year: The Bakery Girl of Monceau.

I wrote this review when the film came out, then didn't post it as I was looking for jobs and didn't want my prospective employers to read all my wanking jokes. It's fine now. 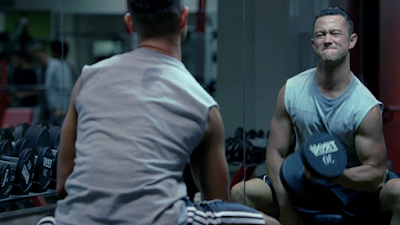 CINEMA: Don Jon (Joseph Gordon-Levitt, 2013) - Joseph Gordon-Levitt's debut as a writer-director is an entertaining, sometimes thought-provoking movie that doesn't quite go all the way. That's a joke about sex, like reviewers in newspapers do. Did you like it?

I can confirm this is a real thing.

The film follows Jon as he tries to reform for the sake of a "dime" (an alleged 10/10 hottie, portrayed by Scarlett Johansson; I'm actually more of a Thora Birch kind of Ghost World fan), who-

-has some unrealistic expectations of her own, perpetuated by Hollywood romantic comedies.

At first Gordon-Levitt appears to be merely doing an impression of a young De Niro, having contracted smirk-itis, but after a while he disappears into the part, as the movie begins to cleverly and astutely shift our sympathies towards this arrogant, preening and conflicted young man. I'm not sure that he quite makes sense as a character, but at least he's arresting, and his story is a largely interesting one. And if his Italian-American family is less nuanced and interesting than the one in Moonstruck (or The Godfather), at least it's superior to the one in Full of Life. As the love interest, Johansson is better than usual, trying out a Jewish New Jersey intonation that suggests her character is a real human being rather than merely another of her appearances as herself-

Sorry, I've remembered another thing I have to do.

-though Gordon-Levitt succumbs to cartoonish triviality at least once behind the camera, getting her to coo, goggle-eyed at her rom-coms (presented as a distractingly phony film-within-a-film), a point that could have been made with a bit more finesse. His other flourishes include a fondness for fast, rhythmic editing to hammer home a routine - a trick he presumably learnt while appearing in Scott Frank's The Lookout, but also done by Aronofsky in Requiem for a Dream - and, as a writer, that predictable gimmick of having an otherwise silent character (Brie Larson) whose one spoken contribution is something incredibly profound.

Speaking of profound, there's something profound I need to urgently research on the internet.

Julianne Moore appears in a key supporting role as a nightschool classmate of Jon's, who isn't employed by the story in anything like the way you might expect. In that sense, and in its basic subject matter, Don Jon is quite original, and there's plenty to chew over in the movie, as it raises some interesting questions above love, desire and the presentation of sex in the media and beyond. Having said that, it doesn't necessarily have many answers, and seems too rigid and clichéd in its presentation of the sexes, making it a good film rather than a great one, and an intriguing experience rather than a satisfying one. Much like the way that Don Jon has sex at the start of the movie, which you're welcome to put in your newspaper.

Thanks for reading.
Posted by Rick Burin at 17:25