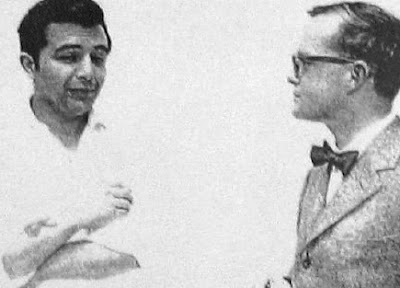 Writer Truman Capote (right) with Perry Smith, the principal subject of his 1966 book, In Cold Blood.

I've always had an odd relationship with true crime. There are some books and shows I just won't touch (the book about Jimmy Savile's campaign of abuse, for example), because they're too ghoulish or ghastly or upsetting, then there are others I find fascinating but the fascination is tinged with guilt, and the stories go round and round my head afterwards (an unfortunate side effect, perhaps, of a chemically off-kilter brain) and make me regret that I ever indulged. For years I avoided true crime altogether (even neglecting newspaper coverage and switching off the radio when crime stories came on) to keep my mood up and my guilt levels down.

Recently, though, I've resumed reading about it, initially just because I seemed to be avoiding books that were held as unassailable classics, adhering to principle in a way that prevented me from doing what I wanted (this is nothing new, I didn't fly between 2005 and 2013 because of my eco-militancy, before I realised that actually I was preventing myself from exploiting the possibility of life to the fullest, which is surely the biggest mistake one can make). I read Truman Capote's In Cold Blood last summer, though I haven't written about it now, as I wanted to also cover the sporadic cottage industry inspired by the book, which led to a straight adaptation and later two films about its writing. 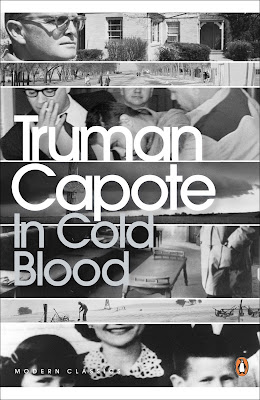 In Cold Blood itself, published in 1966, was a landmark (and notorious) "non-fiction novel" - chilling, hypnotic and horrifying - about a senseless apparently motiveless murder in late-‘50s rural Kansas: how it happened, why it happened and what happened next. Capote had written a series of well-received, often autobiographical short stories and the acclaimed novella, Breakfast in Tiffany's (brought to the screen in a bowdlerised version in 1961), but it was In Cold Blood that sent his star stratospheric, becomes a national sensation.

Its prose was spare and precise, the author’s inspired pacing and ingenious structure gradually unwrapping the characters of the amoral, unrepentant killers, one deadlier and yet much more sympathetic than the other. Exhaustively, aggressively researched and overwhelmingly factual - though with some flights of artistic fancy, especially towards the end - it remains a highly disturbing read, all the more so for being moving, blackly comic and almost impossible to put down. Simply put, it's a classic of the genre, a genre it essentially invented.

The aspect that's stuck with me most since I read it is its delving into the characters' pasts, in search of answers. It reaches no simple ones, and that makes it even more powerful, showing only a collage of abuse, abandonment and alienation upon which the killers' crimes are daubed in blood. The film was adapted, brilliantly, by writer-director Richard Brooks in 1967, and like Capote's book it exploded the medium. It employs the conventional grammar of cinema, but pushes the artform to its limits, not only in terms of its brutal violence and bruising characterisations, shorn of sentiment but not humanity, but in its rich, almost avant garde imagery.

It's a poetic, brutal and sickening film that vividly depicts the two damaged kids who slaughtered an all-American family, with Scott Wilson as the greedy, obsessive Dick Hickock, and Robert Blake (later a murder suspect in real life) playing his sensitive, extremely disturbed partner-in-crime, Perry Smith, whose relationship with the author was later the focus of two imperfect but interesting movies.

In Cold Blood (Richard Brooks, 1967) is a titanic achievement, which manages to attain a stark realism while utilising the full extent of the cinematic arsenal, through Conrad Hall's beguiling cinematography (those tears from the window, above: bloody hell), Quincy Jones' distinctive, perfectly-realised score, virtuosic cross-cutting from Godfather editor Peter Zinner, and brilliant performances from the leads, who inhabit their characters entirely. Wilson − who reminds me a little of Jason Dohring − is an abrasive but charming Dick, while former child star and virtual Smith clone Blake completely inhabits the conflicted, desperate and pathologically lonely Perry. The film reaches conclusions that Capote himself stopped short of, but whether that's the reductionism of the movies or the revealing nature of art is something you'll have to decide.

The only flaw is in the writing, which saddles the film with a voiceover near the end that recalls Fox's compromised FBI docu-dramas of the mid-1940s (like House on 92nd Street and The Street with No Name) and occasionally becomes unrealistic and Hollywoodised when incorporating details from Capote's book that don't quite fit anywhere: so Smith's father gets an extended, deluded soliloquy that investigating cops would never sit and listen to. Having said that, Blake's monologue near the end − which wasn't really said to a priest in the death house, but to Capote years earlier − is the best scene in the film, and an entirely justifiable deviation from the facts to find the truth. Elsewhere, you could argue that writer-director Brooks' search for realism leads to a morally indefensible ghoulishness: it's pretty hard to watch a re-enactment of the killings filmed in the victim's actual farmhouse, though on the other hand it adds a nauseating undercurrent to proceedings that you won't be able to shake off in a hurry.

It's morally questionable, then, and occasionally puts a foot wrong when wrestling with Capote's fact-heavy source, but it's nevertheless one of the defining movies of its decade, and a brilliant marriage of rare and eclectic talents, from Brooks to Capote to Blake to Hall to Jones to Zinner. 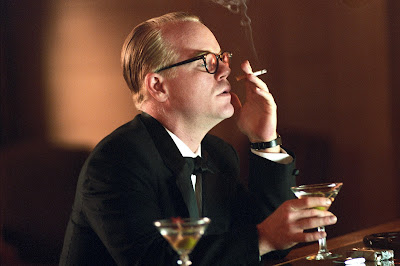 In 2005, 40 years after the executions of Hickock and Smith, two movies about the writing of In Cold Blood went into production. The better known is Capote (Bennett Miller, 2005), released in September that year, which won Philip Seymour Hoffman the Best Actor Oscar, and his shrill, cynical, complex and conflicted Capote is easily the best thing about the film, which is otherwise chilly, self-important and pedestrian, beset by an annoying artificiality, as if the real Capote has been asked to star in a slow, aloof recreation of events, a frankly unworthy home for such a superb characterisation. Brooks' film, despite occasional lapses into Hollywoodese, often felt like a documentary, whereas this production - as shiny as the Oscars it's ogling - never comes close. Why would you compromise the world that In Cold Blood has already captured so completely, and squeeze its story into a conventional rise-and-fall template?

Infamous (Douglas McGrath, 2006) has a major cult following, which insists that this is vastly superior to the bigger-budget film, but it's about as good, with similar strengths and familiar flaws, but an approach that's more glib and goofy, invoking smug culture-clash comedy that may not be very funny (or credible) but does at least paint the gloomy pay-off with greatest levels of contrast. In Brooks' film, the Capote part is essentially played by Paul Stewart, who played the butler in Citizen Kane and was as straight in all conceivable ways as Truman was entirely and exuberantly off-the-wall. 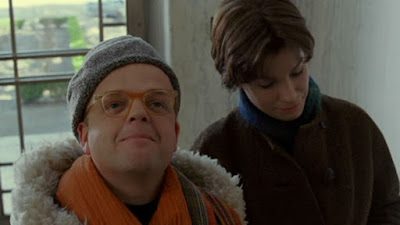 Infamous posits the theory that Capote (Toby Jones) was irredeemably in love with sensitive half-Cherokee Perry (Daniel Craig in absolutely ridiculous make-up), an attraction that is hinted at but not stated overtly in Capote. It's rather cheap-looking, has a curious number of big name actors in thankless, pointless parts, and bends the truth where it really shouldn't - like having Craig flip out and murder the family because he's accused of being gay, which completely misunderstands a key psychological aspect of the book - but it's worth it for a truly superb performance at its centre, and another just off it.

The centre, of course, is Jones's Capote: a waspish, quivering queen with an abyss at his core, his smug, offhand jibes giving way to something human and kind: the film suggesting that his writing underwent a similar transformation during the four years he spent on that seismic "non-fiction novel". Michael Sheen says that when you're playing an oft-caricatured figure, you should get the impression out of the way in the first scene, then play the person not the persona. Jones does that, and even when the film takes some incredible, unwelcome turns, his performance roots it in the real. The scene in the mirror in which his complacent joy turns to self-awareness and mounting horror is showy, but boy does it work.

The other great thing here - in fact the best thing in either film - is Sandra Bullock's understated Harper Lee, a straight-up woman who takes none of Capote's endless shit, but knows and loves him dearly. Director Douglas McGrath's script is frequently more interested in Craig's botched character and rather too on-the-nose about Lee's own subsequent literary failings, but Bullock inhabits the role superbly, rendering every line and gesture genuine, showing yet again just what an excellent actress she is.

Infamous can be overly simplistic - particularly in its ventures into signposted comedy early on - as well as shallow, misleading, inexplicable, overly fond of itself and TV movie-ish in presentation, but for fans of Capote and his crime classic, it's worth seeing, made as watchable as it is by two outstanding performances.

Put Capote and Infamous together and you couldn't find enough to make one great film, let alone two, but it's interesting to see how differently they deal with Capote's contradictions and complexities, how they treat his legacy, and how much credit they give In Cold Blood for wrecking his psyche and ruining (while defining) his career. Jones's Capote is a man playing a part, an extrovert through necessity, playing trivial and trifling because it disguises his insecurity and his pain. Hoffman's is sadder still, but also less sympathetic: his Truman is glacial, imposing and calculating, not humanised by a Harper Lee with Bullock's conspiratorial compassion.

Really, though, I'm not sure that Capote needs to be a character at all. We learn more about him, without the superficial trappings, by reading In Cold Blood than we do from a film about its making. His preoccupations, his gifts, his distractions and his failings - both moral and artistic - are laid bare throughout the book, which is as much about his response to the crimes, and his immersion in the story of the perpetrators, than it is about Dick, Perry or the Clutter family they offed.

You know without even interrogating his sources that Capote has invented Perry's line "... I thought so right up to the moment I cut his throat" and you know why he's done it, a combination of myth-making, yellow journalism, moral delinquency, empathy and stylistic vision. It's a decision that doesn't transgress the rules, because the author himself is writing them, and because he's searching not for the reality but for the truth. And while the Capote surrogate in Richard Brooks' film adaptation could scarcely be more different to the author, he may as well be stood just off camera, such is the movie's faithfulness not only to his text, but to its spirit and its purpose: reputation-making sensationalism shot through with sincerity.

Ironically, it's in the book and film of In Cold Blood that you find the real Truman Capote, not in the films that place him front and centre. 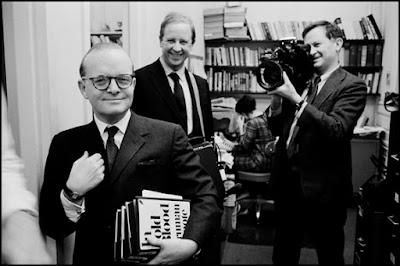 Thanks for reading. I wrote about another true crime book that was turned into a movie here: True Story by Michael Finkel. That post also includes reviews of other Capote works.
Posted by Rick Burin at 12:59