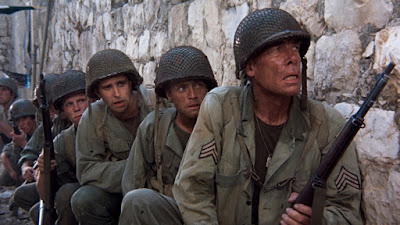 What doesn't this war movie have?

Sam Fuller's masterpiece, released in butchered form in 1980 then 'reconstructed' 24 years later according to his original shooting script, is a war movie like no other: the episodic, wryly fatalistic story of four dogfaces, dubbed 'the four horsemen of the apocalypse' who fight the battles that the writer-director had in World War Two: in North Africa, France, Belgium, Germany and Czechslovakia, under the wing of a taciturn, decent and unsentimental sergeant (Lee Marvin, himself a veteran of the conflict). Fuller himself is immortalised as 'Zab' (played by Robert Carradine), a cigar-chomping wannabe writer with a smart mouth, though his daughter Samantha says she could see him in all four of the horsemen, including the initially cowardly Griff, the most notable non-Luke part that Mark Hamill played during the first Star Wars run.

The Big Red One, named after the 1st Infantry Division of the American army, is a series of brilliant suspense sequences, alternated with poetic, poignant vignettes bearing the mark of memory, that seems to reach an essential truth about war that almost no other film has managed: it's just about survival. There are a couple of incidental flaws − foreigners talking English to one another with foreign accents (a now outdated device) as well as a scene in a castle near the close, which I just don't see the point of − but I found the experience completely and utterly overwhelming, in turn bloody, brutal and enrapturingly beautiful, with moments of tabloid ghoulishness and yet passages of almost Bresson-like humanism. It places you in the centre of battle like nothing else, but has no interest in glorifying its country, characters or the conflict in which they find themselves. It's simply the best war movie I've ever seen. (4) 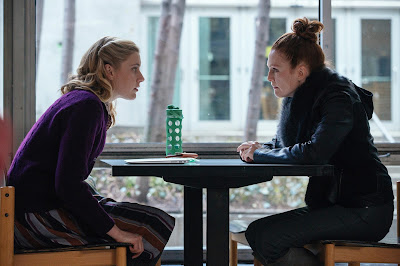 CINEMA: Maggie's Plan (Rebecca Miller, 2015) - The only previous film I've seen from Rebecca Miller was Personal Velocity: Three Portraits, an extremely earnest slice of arthouse feminism that didn't quite come off. This film could hardly be more different: light, funny and accessible, a bit like a Lubitsch movie (it's thematically similar to both Angel and his classic, still contemporary comedy, That Uncertain Feeling) transplanted to the literate middle-class world of Woody Allen and Noah Baumbach.

The story concerns Maggie (Greta Gerwig), who works in arts marketing, sidelines as a complete control freak, and falls in love with a self-obsessed anthropologist and wannabe novelist (Ethan Hawke), bringing her into conflict with his terrifying wife (Julianne Moore). It's an odd combination of competing and probably contradictory ideas, but what it does really well initially is treating these characters as real, really flawed people, and allowing that − rather than Hollywood convention − to determine what happens next.

It also takes them seriously: Hawke nicely plays on his established persona as a sensitive intellectual, Moore seems too broad at first, playing Danish and with a soft 'r', but it's actually a really rounded performance, merely with a couple of quirks, while Gerwig is just magnificent. Again. She reminds me a bit of Jean Arthur, one of my favourite actresses, in that she has a screwball sensibility but roots it in the real. There's a vulnerability, an appealing hesitancy and a melancholia in her heroines, always just beneath the surface, that brings pathos to her comedy. But also her timing is impeccable. Over the past five years, the roles she's been given have mostly been within certain clearly-defined parameters (even stylistically: their outfits are broadly identical), but she never repeats herself: you could put her characters from Frances Ha, Mistress America,
Posted by Rick Burin at 18:47