The best film I've seen at the cinema this year! My favourite sitcom! A really underwhelming, disappointing David Wain comedy that lacks a coherent structure or characters you can truly root for! All in this latest update, which contains more swearing than it strictly should, possibly because I'm sleepy. Or showing off, I forget which. 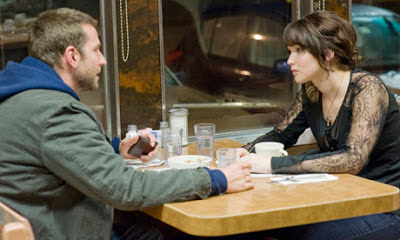 *VERY MINOR SPOILERS*
CINEMA: Silver Linings Playbook (David O. Russell, 2012) – At last! I’ve been waiting all my life for a film about a character who’s a bit like me. And now it’s here. Because Bradley Cooper’s bruised, bipolar protagonist really fucking hates Stevie Wonder’s Ma Cherie Amour. Just like me! And that’s not the only reason to celebrate, since Russell’s original, screwball-y film of two lost, damaged souls connecting, is the best film I’ve seen at the cinema this year.

Cooper is a psychiatric patient released after eight months in a hospital, following an explosive episode brought on by his wife’s infidelity. Invited to dinner by his best friend, he meets a bereaved, "slutty" depressive (Jennifer Lawrence) who offers him a deal: she can get a message to his estranged wife, if he helps her compete in a dance contest. Its rom-com framework may appear conventional, but the film consistently surprises. It’s true that most depictions of mental illness ring false, because a realistic work would usually be really fucking boring, but this is a film that manages to entertain without trivialising its characters or their problems. While angling on the humour of their situation, spotlighting the obsessiveness and lack of social skills that are often a symptom or by-product of mental illness, it takes the subject seriously, an admirably honest approach in a genre often beset by duplicity. Simply put, it’s nice to see these kinds of characters – and specifically these characters – on a movie screen. And like Tom McCarthy or Alexander Payne, Russell can offer escapism while making you think, and feel, a welcome trick on a Friday night, when the temptation can be to immerse oneself in froth.

Cooper, who was just unbearable in The Hangover (a film I loathe), is nothing short of a revelation, and his chemistry with Lawrence – one of the finest actresses working today – is really beautiful. There’s also a nice performance from De Niro, his most interesting in years, as Cooper’s father, who may be trying to build bridges with his son – or may just be using him as a good-luck charm to win money betting on football. His sequences seem distracting early on, taking us away from a beguiling burgeoning friendship, but the film’s apparently disparate elements slot together perfectly as it progresses, leading to a wonderfully satisfying finale. I loved it to pieces. (4) 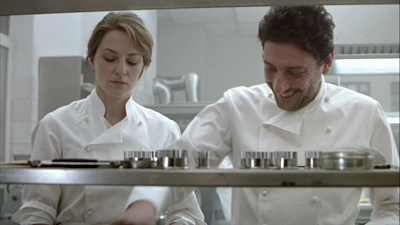 Mostly Martha (Sandra Nettelback, 2001) – When the Catherine Zeta-Jones romcom, No Reservations, was on telly recently, I sought advice from the internet as to whether I should watch it. Almost without exception, everybody in the world told me to avoid it like the plague (or Spice-World), but to track down the German-language original immediately. So I did. Martha (Martina Gedeck) is a lonely, workaholic chef whose solitary existence is transformed forever by the arrival of her niece (Maxime Foerste), whose mother – Martha’s sister – has died in an accident. At the same time, Martha's job as head honcho in the kitchen appears threatened by the arrival of a charming Italian cook (Sergio Castellitto). What I most enjoyed about this grown-up film film was how its happy moments were so well earned, and its downtime so true to its story, a lesson most American rom-coms could do with learning about 30 years ago. Really it’s a well-observed human drama, with flashes of welcome levity, that isn’t afraid of the emotional messiness that’s a part of real-life, or the mistakes, grudges or fuzzy reconciliations that go with it. The film has some minor shortcomings in that its score leans towards cheese (complete with light jazz sax), its cinematography is too glossy and clean for the material and its "blind tasting" scene is a bit tired, but Gedeck is stunning in the lead, and the story really sucks you in, as well as making you terrifically hungry. (4) 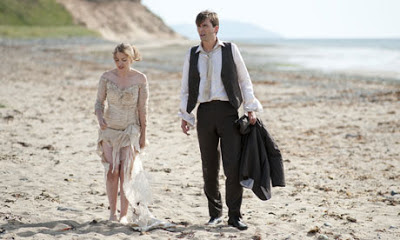 The Decoy Bride (Sheree Folkson, 2011) – A sassy Scotswoman (Kelly Macdonald) returns to the Isle of Man the Hebrides after getting her heart broken, where fate casts her into the life of a ridiculous twitching caricature (David Tennant) – an author and all-time phony who’s about to wed a big-jawed American movie star. This rehash of I Know Where I’m Going! – via Leap Year – doesn’t really deserve to share a sentence with either, as it doesn’t occupy the same realm as P&P’s transcendent romance, nor plumb the depths of that recent, insultingly lazy slab of shite. Any charm it does have rests on the superhuman efforts of Macdonald – whose appealing performance weathers all manner of ridiculous developments – and the lovely Isle of Man locales. As with almost any British production that tries to include some Americans, chunks of it are rather embarrassing (ex pony-smacker Sally Phillips, who co-wrote this one, bizarrely forces herself to play a supporting part with an unstintingly terrible US accent), and this would doubtless have worked better had the leading man approximated the behaviour of a human being – even if his sentimental sequence with the bagpipes is rather sweet. Thanks to Macdonald, though, it turns out alright, her comic timing, periodic underplaying and attractive fieriness breathing life into a story that’s been told too many times. (2.5) 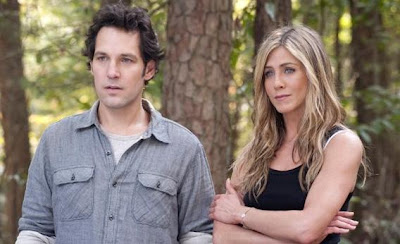 *SPOILERS*
Wanderlust (David Wain, 2012) – A woman wearing too much make-up (Jennifer Aniston) and Paul Rudd (Paul Rudd) chance upon a hippy commune and, after first bidding it goodbye forever, resolve that it’s where they should spend the rest of their lives – pending a two-week trial. It’s his decision to go back there, but it’s she who blossoms, by which the film means that she flashes her tits, wipes her arse with some leaves and shags Justin Theroux’s pretentious slimeball. This mystifyingly misfiring comedy from the people who brought you Wet Hot American Summer (muted applause), The Baxter (exuberant applause) and Role Models (sheepish cheering) has a couple of massive laughs at the start, benefits from Rudd’s typically amusing performance (spotlighting his deadpan, very English sensibility) and boasts a strong cast on paper, but is pointlessly confrontational, emotionally vapid and ultimately nothing more than a string of barely-connected, clichéd set-pieces, each more desperate than the last. If you find yourself watching a film, thinking, “I could probably have written this”, that’s usually a bad sign. Especially if your next thought is: “I’m fucking glad I didn’t.” (2) 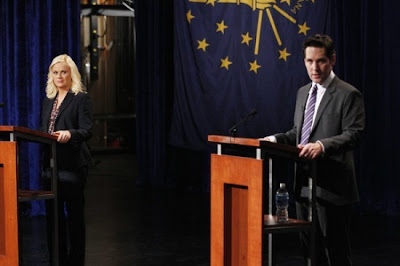 "Behind every successful man is... me, smiling and taking partial credit."
Parks and Recreation: Season 4 (2011-12) - I'm something of a novice when it comes to TV, but this may be the greatest season of small screen comedy I've ever seen. Tracing Leslie's election campaign from genesis to polling day, with a few inspired diversions, it expertly refines her central character, uses the show's supporting heroes – Ron, Andy, April, Ben and Tom – in the best possible way, breathes real life into previously uninvolving figures like Chris and "Ann Perkins!" and finds room for enjoyable guest spots from Paul Rudd (as idiotic election rival Bobby Newport) and Kathryn Hann. There are a handful of lesser episodes along the way (I'm Leslie Knope, Pawnee Rangers, Bowling for Votes), but it's very much relative, and the overwhelming majority are astonishingly good: like End of the World, Smallest Park, The Trial of Leslie Knope, Campaign Ad and Win, Lose or Draw. This fourth season is smart, sharp and satirical (particularly in the nerve-shredding episode, The Debate, which is a complete triumph and may just be the best thing Parks and Rec has ever done), but retains its cheeringly, often exaltingly soft centre. It's also breathtakingly funny. "First of all, you did the right thing by hiding under this table." (4)

See also: There are brief reviews of Season 2 and Season 3 elsewhere on the blog.
Posted by Rick Burin at 00:17