The Hobbit: There and Back There Again - Reviews #141

Bilbo, Bilbo, Bilbo Baggins (the bravest little Hobbit of them all), gets a third of the way towards facing a big dragon, in Peter Jackson’s return to the Lord of the Rings universe.

The first thing to say is that it’s lovely to be back there, and that this isn’t the misfire various posturing critics would have you believe. The second is that Freeman is as perfect a Bilbo as you’d imagine: his impeccable comic timing and understated rendering of heavy emotion filling the film with charm and hobbidity (or whatever the hobbit equivalent of humanity is) whenever he’s on screen. And the third is that it all looks a bit weird. The 48fps innovation does rectify some of the problems that 3D has with fast-moving action, but it also gives the film a weirdly low-budget look, more like a prime-time Saturday night ITV serial than a film which might well be troubling box-office records in the coming weeks.

There’s also a feeling that this is LotR-lite, more episodic, with somewhat less memorable supporting characters (a legion of dwarfs doing some nice work under excessive prosthetics) and a greater accent on broad comedy and gross-out humour. But it’s also very entertaining, with a cracking final 45 that includes the welcome, perfectly-placed and marvellously executed appearance of Gollum. The scenes in which his pluralising, pointy-toothed little scamp – sporting a Bobby Charlton-ish combover – tangles with Bilbo through a series of complex riddles are just a joy to watch, effortlessly reclaiming Serkis’s creation from a decade of spoofery, and unleashing him into the action with barely disguised glee. I also greatly enjoyed McKellen’s twinkling performance as Gandalf the Grey, especially his line about drawing courage from Bilbo. And Jackson knows his way around an action set-piece, as evidenced by the very neat use of a ladder.

I’m not convinced the film will attain the classic status of the LotR trilogy, but last night’s rapturously-received screening (which included a queue out the door as people jostled for the best seats, and a lovely reaction to the film’s most obviously moving moment: awws, then applawws) suggests that Jackson hasn’t ballsed it up after all. Apparently we’re seeing it again next week, so I can report back further then. (3)

Actually, it wasn't a week I had to wait, it was three days, as Mrs Rick was rather excited. 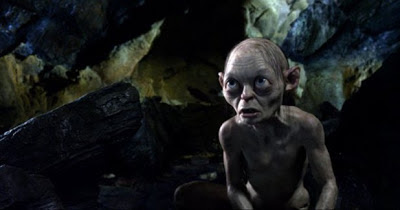 There and back there again. After braving the intensity of a first-night screening (lovely audience; I do enjoy nerds), we went back for more of the same on Sunday. The 48fps still looks odd – if a little less so second time around – and Freeman and Gollum are still awesome. But my thoughts don't stop there. No. I had several more.

The Hobbit is a tonally uneven movie, the almost inevitable result of squeezing a children's book – lighter, less doom-laden and more knockabout – into the LotR template, but I'm not sure that's necessarily a problem, and I don't think the criticisms about overlength or padding ring true. People say that not much happens, but our heroes fight trolls, then goblins, and then orcs, almost get crushed to death by rock giants, and watch as an apparently ineffectual little bookworm becomes a stout and noble warrior. If that happened to me in the space of 166 minutes, I'd consider it quite an eventful couple of hours.

I barely touched on the dwarfs in my first review, largely because I wrote it in 10 minutes on my lunch break. On second viewing, I was able to distinguish a little better between them, and I do think that Jackson and his writers have done a reasonable – if flawed – job of sketching out these characters. Bombur's only real contribution is to break a chair by being fat, but Vengeful Dwarf, Old Dwarf, James Nesbitt Dwarf, Chiselled-Yet-Playful Dwarf and Right Up His Jacksy! Dwarf are all given moments to shine, or, in the latter case, look like a ginger Nicholas Lyndhurst shouting rubbish. The tearjerking pay-off between Vengeful Dwarf (Richard Armitage) and Bilbo is an obvious highpoint - I enjoyed Armitage's forthright performance throughout - but James Nesbitt Dwarf's exchange with the apparently departing hobbit is to be treasured just as much, and Old Dwarf's tale of woe ("... for their dead were beyond the count of grief") is very affecting.

The sequences in which the dwarfs pile into battle are also rousing, accompanied by a soaring motif from Howard Shore's triumphant score. The best of the action spectaculars is the encounter with the goblins, particularly the climax, in which second unit director Serkis and his crew have the baddies battered and throttled with a ladder – which is subsequently used to sprint over a crevasse – and then chase a runaway boulder (perhaps it was them behind Indy that time), which skittles their adversaries. I'm not sure that the hideously unattractive goblin king, or the cockney, mucus-filled trolls are the stuff of movie legend, but they're fairly entertaining, while harking back to Jackson's early horror movie Bad Taste (which I still think is dreadful). In fact, Jackson's first forays into film are an obvious touchstone here. There are a few cock-eyed camera angles (including one woozy, swooping shot in the dinner sequence at Bag End) that are more readily associated with ultra low-budget genre flicks than Hollywood blockbusters.

McKellen is excellent reprising his role as Gandalf: I particularly enjoyed his mischievousness - especially the sheepish look he gives Galadriel when she rumbles him (not a euphemism) - his line about Bilbo, and the interplay between wizard and hobbit. Freeman's performance as Bilbo is really lovely. I think most people nodded sagely when he was cast, and that confidence has been vindicated. He's equally good at being a bossy Baggins, a fish-out-of-water or an unexpected hero, and does some impressively childlike gawping when asked to hang, terrified, from a rockface. The only off-notes are a couple of minor technical errors in the way he has been forced to acclimatise to green screen work: firstly when he's looking a good foot away from Gandalf's head, and secondly when he's pointing a sword vaguely near Gollum.

The extraordinary Riddles in the Dark sequence is probably the best thing I've seen in a cinema this year. I was in absolute hysterics, again, at Gollum's delivery. His agitated yelp of "Give us a chance, precious! Give us a chance!" is almost indecently funny, though of course there's terror and menace circling under the surface. It all takes place in a dark, dank cave, lit only by Bilbo's lightsaber (that's what it was, right?), but exists on a higher plane than everything that surrounds it.

For while The Hobbit is an admirable, entertaining and often funny film (the goblin stenographer deserves a quick mention), packed with stunning landscapes, ailing hedgehogs and rabbit sledges, and lit by moments of considerable emotional catharsis, it's also a bit lumpy – and more than a touch erratic. The defiler looks like the action figure of Mum-Ra I had as a kid, the rock giants set-piece feels flat, uninteresting and unbelievable (it's the one instance where the HFR really takes you out of the action, as the integration of CGI and live-action is so transparently false) and a recourse to snot-based humour is rarely to be found in truly great films.

I thought Leonard Maltin's assertion that The Hobbit was "incredibly boring" was so far wide-of-the-mark that he'd been trying to make it with a green screen, but I'll admit that there are a few dips in interest. (Still, these shortcomings seem to have more to do with slack screenwriting than spinning out the story: Jackson has always struck me as someone whose passion is for movies, not money, so who cares why the studio green-lit a trilogy?).

It's that messiness, and those periodic dry spells, that detract from the film rather more than the collision between grown-up chatter and broader fare, like one of the film's greatest gambles, the broadly comedic introduction of Sylvester McCoy as that "foolish fellow", Radagast the Brown. It's a rare movie indeed that can house both an eloquently-scripted set-piece set at a diplomatic think-tank, and a frenetic attempt – by a wizard covered in bird poo – to resuscitate a hedgehog, but both work well, in themselves and as a part of the larger piece.

Many critics seemed to be competing to see who could appear the most discerning by being the most critical (credit to the Guardian's Peter Bradshaw, who can be guilty of one-starring everything in sight, for his measured review), but I think they got this one badly wrong. It's not perfect, by any stretch – and not nearly so unexpected second time around – but it's largely enjoyable, with a trio of superb performances and a handful of truly special moments.

I don't understand why he's called the Neck Romancer, though. He didn't romance anyone's neck during the whole movie. (3) again.
Posted by Rick Burin at 13:08