Apparently life begins at Reviews Update #140, so bring it on. Just the three films this time, as I've been busy making Christmas cards. And writing a lengthy diatribe about that abysmal Ricky Gervais movie (see below). Join me.

Seven Psychopaths (Martin McDonagh, 2012) - A screenwriter called Marty (Colin Farrell), who's working on a script about Seven Psychopaths while wrestling with writer's block, finds himself surrounded by gangsters, murderers and, well, psychopaths, in this second feature from the writer-director of In Bruges. Also along for the uncomfortable ride is Marty's best buddy, grinning dognapper Sam Rockwell – who's snatched a tiny, fluffy pooch belonging to a psychotic ganglord (Woody Harrelson) – and his boss, a softly-spoken Christian (Christopher Walken) whose wife is dying of cancer. And so unfolds a niftily-scripted, neatly-constructed tale of erratic, violent behaviour, that shifts between fantasy and reality, taking in Buddhist gunmen, serial killers who only kill serial killers (enter a shambling, rabbit-carrying Tom Waits, whose monologue is a real showstopper) and serial killers who only kill mid-to-high-ranking-members-of-the-Mafia-and-the-Yakuza.

There's more than a hint of Tarantino about the on-screen notes (a running tally of psychopaths is handily included), the time-shifting narrative and the post-modern dialogue, which trades in biblical allusion, pop culture references and post-modern genre-subversion – and perhaps that's the problem. Because while I thoroughly enjoyed Seven Psychopaths – despite a decided dragginess in the final third, as the meta elements jar and the film's contrariness becomes predictable – In Bruges felt like the work of some sort of genius, whereas this feels like the work of a very funny writer with a dash of class about him (the pay-off line he affords Walken is unexpectedly resonant). Seven Psychopaths is an incredibly funny film, with a host of spectacular gags, a penchant for an inspired diversion – several of which could make great films themselves – and another superb performance from Rockwell (whose habit of responding to the question: "What?" by repeating whatever he's just said verbatim is a superb comic invention), but it's also a slight letdown as a follow-up to one of the defining films of the last decade. I can't think of another filmmaker who could have created In Bruges, but I can name 10 who could have made this. Despite the movie's many virtues, we need McDonagh for something more – something better – than post-modern gangster flicks. (3) 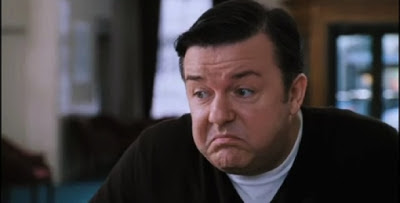 *A COUPLE OF VERY RUDE WORDS. APPROACH WITH CAUTION*
The Invention of Lying (Ricky Gervais and Matthew Robinson, 2010) - In a parallel world where everybody tells the truth, Ricky Gervais's everyman invents falsehood, turning his nobody into a somebody, and giving him a shot at Pouting Sexy-Woman Jennifer Garner. But when he tells a lie to ease his dying mum's mind, he inadvertently invents religion (yawn), investing him with a frightening power and attracting attention from all four corners of the globe. What begins as a mildly entertaining high-concept comedy (with Woody Allen-ish credits) turns into an incredibly heavy-handed atheist satire that operates at the heady intellectual and theological level of an 11-year-old skim-reading Philosophy for Beginners. I've found before that Gervais is fine at ridiculing Karl Pilkington for being stupid, but when he's asked straightforward questions about his own beliefs, he flounders, ums, ahs, and ultimately says something either facile or vague and non-committal, before changing the subject and calling somebody a cunt. Now you can enjoy that sensation at feature-length!

I'm a church-going Irish Catholic, but I've seen and heard some invigorating and impressive take-downs of religion in the past (Richard Herring's 2010-11 show was an extremely passionate and sure-footed examination of his atheism, and accompanying obsession with Jesus, while Maggie Holland's A Proper Sort of Gardener expertly condensed uncertainties about the God of the Old Testament into four tear-jerking minutes). Watching Gervais outline his embarrassingly simplistic views here takes his cringe-comedy to new levels, as if his legendary set at the Diana memorial gig had gone on for three days. And his basic "truthful world" concept, while neat in theory, is frankly bollocks in execution. In his podcasts series, I remember Gervais having a go at Pilkington for saying that he thinks in full sentences. But that's exactly what Gervais' characters do here. It's not that they can't lie, it's that they speak in one-line précis of their most secret or embarrassing thoughts, which doesn't make any sense. That's not to say that the set-up doesn't inspire some clever sight gags or smart sketches (the Coke advert is good), but it's confused beyond belief, even before attempting to meld the tedious-message-movie to the unconvincing-rom-com, with its unbearablly twee recurring mantra of "fat kids with snub noses". There's also a sense that Gervais and Robinson have gnawed off more than they can chew (or at least more than they have time to script), epitomised by a reliance on dire musical montage that removes the need to write dialogue for what you might think were important scenes, like our hero using his new powers to do good. He seems to be lying to people, and they seem to be smiling; beyond that, I've no idea what's going on. That poverty of invention extends to the Lecture Films sub-plot, in which Gervais' screenwriter devises an outlandish new work supposedly based on a true story. A decent idea, but the result is bafflingly unfunny.

Perhaps the problem is that while Stephen Merchant appears in the film's only laugh-out-loud scene, he wasn't around to co-write this one. On the podcasts, he would almost always alight on the funniest way of exploring or expanding a subject, and exhibited impressive editing skills (the conventional wisdom is that great comedy double-acts usually consist of an innovator and an editor; I'd argue that Merchant is both, and should maybe go it alone), while Gervais would contribute relatively little, largely whooping, screeching with laughter or being excessively rude to Pilkington in a jokey way that's nevertheless uncomfortable to listen to. I don't actually dislike Gervais, or his work, as a rule: The Office was excellent, Extras was quite good in places, and Ghost Town - an earlier high-concept affair to which The Invention of Lying bears some similarity - worked rather well. And I do think he plays the emotional scenes here pretty effectively. But I do think that his brand of comedy is very limited and that his rarefied position means that there's simply no-one there to tell him when he's being boring, trivial and wearyingly samey, wasting a stellar comic cast, or delivering his tiresome point with the delicacy and quiet finesse of a wrecking ball. It's a bit like Idiocracy, if Idiocracy was shit. (1.5) 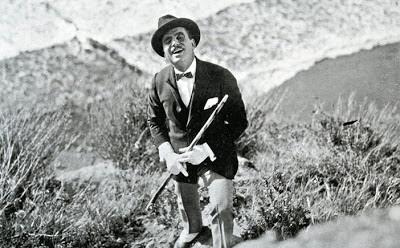 *MINOR SPOILERS*
The Mollycoddle (Victor Fleming, 1920) - Richard Marshall IV (Douglas Fairbanks), the latest in a long line of American pioneers, adventurers and chivalrous gunmen, is something of a disappointment. Raised in Monte Carlo since the age of four, he's an effete, cane-wielding, monocle-wearing fop who's thought to be an Englishman – the indignity! – because he keeps saying things like "ripping". Then all at once he falls in love, is persuaded to return to his homeland and gets mistaken for a secret service agent by a diamond smuggler (Wallace Beery), transforming him into a butch, all-American he-man and solo army (who still talks like a posho). This Fairbanks vehicle starts in scintillating fashion – incorporating a dazzling historical scene featuring Marshall III that perfectly marries humour and action, and a very funny bit establishing his progeny's amusing girliness – and ends with a brilliant, thrilling fight-scene that sees the hero and villain throw each other through walls and plunge, Holmes-like, down waterfalls, but what's in between is a bit slow and stodgy, with too much plot and lacklustre would-be intrigue. A shame, really, as the set-up promises so much, there are flashes of true greatness, and the film boasts an admirable, unexpected progressiveness in its dated but heartfelt message that whites and "Indians" aren't so different. (2.5)