Lately, I've been really spoilt in my movie-watching - different to having my movie-watching spoilt, as has happened at times this year - and this new, indescribably tiny batch of films is no different. Take This Waltz is now my second favourite movie of 2012 (going by UK release dates), trailing just behind last week's Silver Linings Playbook, and the fun doesn't stop (or really start) there. It goes marginally further. So join me, as I take you on a journey to a TV with an accompanying DVD player. 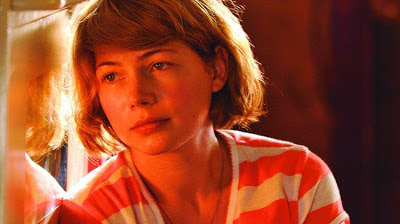 *SPOILERS*
Take This Waltz (Sarah Polley, 2011) - Is happiness just about finding the right person? That's the question posed by Sarah Polley's fiercely intelligent new drama, a grown-up, adult film about a failing relationship, and the possibility of a new and better one, powered by a staggeringly brilliant performance from Michelle Williams. She's a wannabe writer, married to kind, gentle Seth Rogen, but experiencing an intense five-year itch which she thinks free-spirited artist Luke Kirby may be able to scratch – if she just can summon the courage to act. Beginning mysteriously, ending ambiguously and overflowing with symbolism, foreshadowing and existential angst, Polley's film is distinctive and bracingly original, with an unshakeable sense of conviction, an unflinching approach to storytelling and an unforgettable pay-off. It's a film with something to say and the talent to say it, armed with spellbinding imagery, an ambitious script and a sublime song score. And even its rom-com interludes feel new: the zingy badinage and mutual goofing twisted beyond all recognition by the torrent of emotions beneath the surface.

It isn't a flawless film. It's built on a rather feeble coincidence (the adultery interest lives right across the road), some of Polley's dialogue is too mannered, Kirby is never more than adequate (and he drives a rickshaw – what?), while Sarah Silverman's character exists only as a metaphor and rhetorical device. But films don't have to be flawless to be truly great. This is a movie that really moved me: philosophically invigorating, true to life and as painful as a knee to the nuts. Which other film has characters who are "afraid of being afraid"? Which romances tell you, "In the big picture, life has a gap in it, it just does. You don't go crazy trying to fill it"? Where else do characters re-connect so sweetly, only to fall away so completely? Rogen is great, building on the promise he showed in 50/50 and Freaks and Geeks' The Little Things, but no-one working today can keep pace with Williams. This is a wondrous film, and its beating heart is a perfect performance from the most exciting actor on the planet. (4)

This is an expanded version of a review that I wrote for MovieMail.

See also: Williams also had mo' marriages, mo' problems in Blue Valentine, one of my favourites of last year. 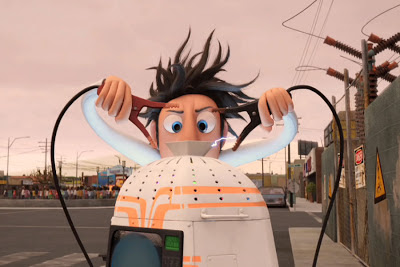 Cloudy with a Chance of Meatballs (Phil Lord and Chris Miller, 2009)[/b]

The best non-Pixar animation to come out of America last decade is just as delicious second time around: a barrage of brilliant jokes (and oversized foodstuffs), bouncing off an appealing romance and a touching father-son subplot, as inventor Flint Lockwood (voiced by Bill Hader) makes it rain food, unfortunately endangering the world. Its characters are superbly drawn, its action sequences are masterfully conceived and just about every gag is judged to perfection, several nailing the quiet absurdities of 21st century life in a way that few films master. It doesn't need non-sequiturs (the fall-back for any failing animation), because it's got something better: sensational comic timing and the most spectacular set of running gags I can remember. It's also admirably fearless - it isn't afraid to get soppy, or post-modern, or really and genuinely weird - but sharp and streamlined too. Everything serves the story. Even the bit where a monkey called Steve, who's wearing a thought-translator, pulls out the heart of a malevolent gummy bear and eats it. (4)