I've been having a great time. Here's why. (Reviews contain periodic adult content: swearing, smugness... that sort of thing.) 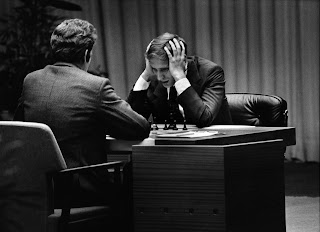 Bobby Fischer Against the World (Liz Garbus, 2011) – Gripping, thrilling and ultimately gutting documentary about the US chess prodigy, who dropped out of the public arena at the peak of his powers and spiralled into insanity. It’s an extraordinary story and this film does it justice: masterfully-constructed, with articulate eyewitness accounts, remarkable archive footage and a superb middle-section in which it accessibly deconstructs the key plays of the Cold War grudge match that was Fischer vs Boris Spassky, lending each significant game within the match a cool-as-flip title like ‘The Poisoned Pawn’ or ‘Son of Sorrow’. That pivotal encounter takes up a fair slab of the running time and this outstanding documentary is one movie that I would happily have watched another two hours of – skipping as it does fairly quickly through Fischer's troubled upbringing and horrific, anti-Semitic meltdown – but even in just 90 minutes it does a superb job of pinning down the elusive, reclusive Fischer, building up his status as a genius, while attempting to comprehend his actions, and nature, as a man.

Particularly insightful is the passage about paranoia being an essential part of chess – that is, trying to anticipate your opponent’s moves (Kasparov comments that there are 1,000,000,000,000,000,000,000,000,000,000,000,000,000,000,000 possible scenarios in a chess game, equivalent to the number of atoms in the solar system) – but a catastrophic approach to take into one’s life. Alas, for Fischer, chess was his life. The only bit I didn’t like was the use of an offensive, apparently shit silent film to illustrate Fischer’s crumbling psyche: an unusually crass misstep in what is otherwise a sensitive, extremely insightful portrait. BBC4 inexplicably screened this under the markedly inferior title of Bobby Fischer: Genius and Madman, presumably sating the audience switching over from My Head Is a Piece of Toast on Channel 5. (4) 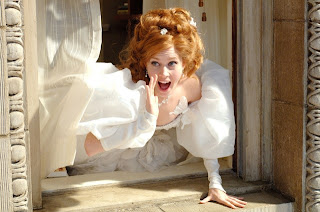 Enchanted (Kevin Lima, 2007) - This is lovely, a superb subversion of Disney's princess films, by Disney. Amy Adams is the redheaded cartoon heroine kicked into the live-action world - and modern-day New York - by evil witch/Queen/potential stepmother Susan Sarandon. She's followed by conceited beau James Marsden, but finds herself falling instead for divorce lawyer and single parent Patrick Dempsey. Villainous, snivelling Timothy Spall also turns up every so often, mugging like a low-rent Charles Laughton. It's a funny, charming and surprisingly sharp movie, with winning performances from Dempsey and - particularly - the beguiling Adams, and two brilliant musical set-pieces. The second is a giant, meticulously-choreographed production number in a park, while the first (and best) sees her cleaning an apartment with the help of her animal friends: flies, cockroaches, pigeons and rats. One of my highlights of the year, that. The film's special effects climax is pointless and incongruous (see also: Young Sherlock Holmes), but it's the only real shortcoming here. Enchanted is an exceptional family film, shorn of the saccharine and emotional pretentiousness of so many Disney movies, trading instead on genuine heart, humour and invention. It was what I thought Tangled might be like, but then categorically wasn't. It made me feel all happy and warm inside. (4) 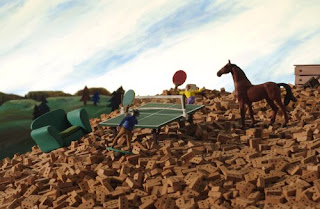 A Town Called Panic (Stéphane Aubier and Vincent Patar, 2009) – Anarchic, uproarious stop-motion animation about housemates (and plastic figurines) Cowboy and Indian, and what happens when they accidentally order 50 million bricks for their friend Horse's birthday. A unique film of relentless energy, full of inspired visual gags, with plotting that's impossible to second-guess, even if the scattergun approach means that not every gag hits the mark. Perpetually-yelling neighbour Steven is one of the funniest characters I've encountered: the scene where he eats a gigantic breakfast being the absolute highlight here. (3.5)

Monsters (Gareth Edwards, 2010) - A (photo)journalist (Scoot McNairy) takes an engaged heiress (Whitney Able) back to her tycoon father, but must first navigate perilous rivers and jungles beset with a few fucking massive octop-aliens. Yes, it's It Happened One Night meets Apocalypse Now meets a film about fucking massive octop-aliens, with a poignant romance at its centre - comprising a trio of truly touching scenes - an atmosphere of near-constant suspense, and an assured style that creates a fully-realised apocalyptic world through sumptuous handheld visuals. There is one scene, upon the couple's arrival in a ghost town, where both the scripting and the acting suddenly break down, but otherwise it's first-rate all the way. Despite that bit where I said it was like two other films, this is actually a really original movie: tonally, dramatically and in terms of those fucking massive octop-aliens. (3.5) 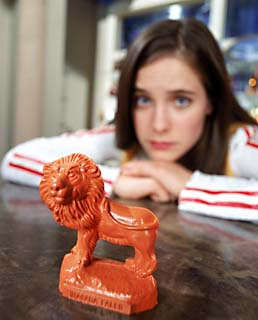 TV: Wonderfalls (Created by Bryan Fuller and Todd Holland, 2004) - Like My So-Called Life and Freaks and Geeks, Wonderfalls belongs to that elite, unfortunate band of quality American dramas cancelled by their network after a single season. Or in the case of Wonderfalls, four episodes, screened in the wrong order. Caroline Dhavernas is Jaye, an aimless 24-year-old Gen Y-er, who lives in a trailer-park and works at the Niagara Falls gift shop. She's a sardonic, quick-witted, selfish man-eater, or at least she was, until souvenirs with the faces of animals - any animals - began telling her what to do. Now she's saving lives, restoring reputations and serving as matchmaker for her lesbian sister, while engaging in a tricky, appealing, on-off relationship with barman Eric (Tyron Leitso), whose wife just sucked off a bellboy. Dhavernas is terrific: adept at the put-downs (if occasionally too mannered) and unexpectedly excellent in the quieter, more reflective moments, particularly in the moving final episode. There's a scene with her sister in the back of the gift shop where she breaks down in tears that got me all choked up. She also pronounces "stoopid" in a wonderful way, wrinkling up her face like a young Myrna Loy. She'ss supported by a decent ensemble, with concerned, intrigued brother Lee Pace and sassy confidante Tracie Thoms (the especially annoying one from Death Proof) the pick of the bunch. There are also a few notable guest appearances, including one from Nurse Ratched. The series is directed with particular flair - series co-creator Todd Holland helmed a few, while Heathers director Michael Lehmann did the last one - with a singular style that memorably utilises the round-edged "viewer" gimmick as part of its arsenal of visual weapons. Later episodes also incorporate that welcome old stalwart: the slo-mo sad sequence cut to a pop song. And the theme song itself, by Andy Partridge, is very cool in its jaunty, boop-boop-boopy, "wonder-why-the-Wonderfalls" way.

It isn't a terribly consistent series. The first two episodes are flat-out phenomenal, but the next five - whilst enjoyable in themselves - are largely self-contained, with little or none of the character development necessary to elevate a comedy-drama from the good to the great. Episode eight, Lovesick Ass, gets it back on track in considerable style, a total triumph that marries the smaller and larger picture to spectacular effect, with the introduction of a 13-year-old compulsive liar who falls in love with Jaye. The next two are similarly superb, but episode 11 is overly melodramatic, while the penultimate outing is a bizarre anomaly that takes us out of the main story completely, with some fairly entertaining but completely ridiculous supernatural gubbins about Native Americans. The final chapter goes all Press Gang on our collective asses, as Jaye, her sister, her bowl-haired schoolboy boss and a fat security guard are held hostage by a gunman. That plot is only so-so, but the way it plays into the resolution of the main story is smartly-handled, and the whole thing has a sweet and satisfying pay-off. A good job really, since the two follow-up seasons that were planned never transpired. Contemporary TV seems littered with such (relatively) sad stories. (3.5)

TV: Bored to Death (S2, 2011) - Jason Schwartzman returns as the shambling, unfulfilled, pot-obsessed PI in the second season of Jonathan Ames' cult comedy, one of the most idiosyncratic series of the past decade, even if one can broadly sum up its appeal by scribbling 'Wes Anderson does film noir'. Schwartzman is joined once more by bearded, easily-stung comic-book maestro Zach Galifianakis and eternally rutting sexagenarian Ted Danson. This is a wonderful eight-episode cycle, a real step up, making its characters clearer and more sympathetic, and adding an undercurrent of subtle sentiment to each episode. It's clever, funny and with a wordy, articulate script. The break-up scene between Galifianakis and boozy moll Kristen Wiig is just amazing. Roll on season three. (3.5)
Posted by Rick Burin at 22:42