I've got to go back to my holiday in a moment, but here are a couple of reviews: 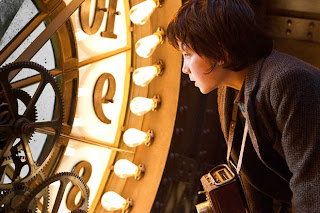 Hugo (Martin Scorsese, 2011) - Little Martin Scorsese (Asa Butterworth) rescues the reputation - and happiness - of neglected, balding film titan Michael Powell (Ben Kingsley) in this heartwarming, Truffaut-ish love letter to the early days of cinema, set around Montparnasse train station. The film is unapologetically episodic, plays by its own rules (breaking off for oodles of back-story more than once) and hits the target most of the time, thanks to the fascinating subject matter, Scorsese's vivid direction - incorporating spectacular use of 3D - and a cast that does broad in a way that works. It's easily the best thing Scorsese has done since Goodfellas - excepting No Direction Home, of course, on the grounds that it doesn't really count. (3.5) 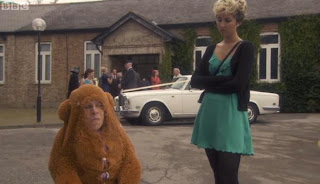 *REVIEW CONTAINS ONE INSTANCE OF ANGRY SWEARING*
Life's Too Short (S1, 2011) - Shortly after making the first series of The Office, Ricky Gervais was asked about his favourite sitcoms of all time and, waxing lyrical about Cheers, said the most impressive thing was not pushing boundaries of taste, but making shows that - while inoffensive and of the mainstream - were of exceptional quality. Unfortunately he seems to have forgotten that, as this over-familiar mockumentary, mining the comedy of embarrassment via reheated stock situations and populated with boring celeb cameos, is full of tedious, laboured taboo-tickling shit, even if its treatment of dwarfism is generally quite sensitive)*. Warwick Davis is good value in the lead, playing a hideous spin on himself, but the supporting cast is mystifyingly poor (with the honourable exception of the excellent Rosamund Hanson) and the material, while containing moments of genuine inspiration (the sight of our hero pretending to be the Lord of the Dance in a hotel room will live long in the memory), is terribly spotty: predictable, obvious and frequently unfunny, particularly in the underwhelming final two episodes. I'm a conventional, sentimental sort, and my favourite comedies generally leave me feeling uplifted and fulfilled. After a fun start, this one made me angry, deflated and disappointed - especially on behalf of Davis, who gives his best and is clearly a decent comic performer. Apparently the series is coming back in 2013, but I don't think I'll be rejoining it. After all, life's too short. Arf. Somebody probably already did that one. (2)

*I'm not saying that there isn't a place for that kind of comedy, done well - of course there is. It's just bizarre that Gervais seems determined to carve a niche there, as he's really not very good at it.
Posted by Rick Burin at 17:28