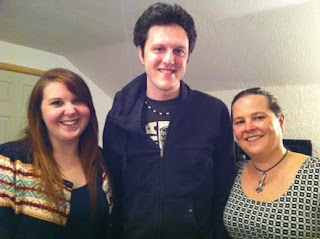 What I did on my half-day of holiday. Left to right: Folk hero Ruth Notman, an excitable hoodie, and fiddler and singer Bryony Griffith.

"The moral is: 'When you get out of prison, have a wash before you go to a brothel.' It's one I've lived my life by." - Ruth Notman introduces the song Limbo

Anyone who's been near my ears these past couple of years will know that the two records I've listened to more than any others have been those of Ruth Notman, the Nottingham-born folkie who shot to fame in 2006's BBC Young Folk Award competition, before strolling into my consciousness a full three years later (the pulse of popular culture has a restraining order against my finger).

For me, a 30-second blast of comic song Johnny Be Fair on a Mike Harding podcast was enough to peg her as another Sandy Denny or Anne Briggs. Her voice was full, one-of-a-kind and overflowing with an infectious, intoxicating joie de vivre. You could hear her smiling as she sang. Further investigation revealed her to possess the single greatest pronunciation of the word "love" in popular music. I snaffled up Threads (2007) and The Life of Lilly (2009), stuck them on my iPod and listened to little else for months on end, lost in a pair of records humming with unbridled joy, interspersed with moments of tenderness, frailty and sorrow that rob the breath from your body.

This blog isn't heavy on hyperbole, but she is, simply, one of the most gifted and singular artists I've encountered. An original in a world of few. A talented writer and a song stylist capable - like Judy Garland and Billie Holiday - of effortlessly articulating precise and piercing emotion.

Alas, being stuck in the 1840s (I did just use the word 'alas') and saddled with both a massive environmental bonnet-bee and a miniscule bank balance, I don't own a car, which has made heading to Ruthie's irregular gigs at often inaccessible venues an unenviable challenge. But, after 18 months of waiting for her to play the Co-op up my street, I relented, snapping up tickets for a pub gig 70 miles away and meticulously planning the eight-hour, eight-train round trip, complete with an overnight stay in a room above the venue. Yeah, I really like Ruth Notman.

So upon arrival, nursing my now ever-capitulating back, dosed up to the eyeballs on sleep-inducing painkillers I was countering with lovely caffeiney Coke (sorry to moan; just setting the scene), myself and my considerably superior half headed right for the good seats, snagging a couple of front row spots.

In a whirl of perfume and self-deprecation, Ruth and stand-in accompaniest Bryony Griffith of The Demon Barbers (playing fiddle) take to the small stage in the bar area of Lowdham's Old Ship Inn. It's a sell-out, with just the other three front-row seats unoccupied, a gaggle of visiting folkies choosing instead to lean on a well-stocked bar.

Beginning with an ebullient Billy Don't You Weep For Me - the first cut from her first record proper - Ruth proceeds to craft a simply brilliant show that juxtaposes heart-stopping music and charmingly spontanteous repartee. During the two-hour performance, she'll giggle a lot, offer a half-dozen off-the-cuff stories and off-kilter observations ("My Skoda isn't 'bullet grey', it's blue", she says, apropos of very little) and claim to have a "diva-ish" voice that doesn't like hot rooms or carpets. Battling both tonight, as she alternates between keyboards and guitar, it shows no ill effects.

The highlights of the first half are flatly astonishing readings of ballads Lark in the Clear Air, Fause Fause and closer Caledonia - an intensely moving tale of flowering, nostalgic love that somehow tops her versions on record and on YouTube. Elsewhere, the complex syncopations of Limbo get an airing, alongside a capella knockout The Young Banker and A-level composition When the Lonely Day Dies, now shorn of its Westlife-style key-change, as Notman grinningly observes. Little Boxes, made famous by Pete Seeger and definitively recorded for Radio 2 by Ruth, is an unexpected inclusion, delivered in exalting fashion.

Though they've known each other for years, Notman and Griffith have never played together in public before - the accompaniest learning the tunes for this gig from CD. For the audience, it's a real one-off, a chance to hear these familiar songs underscored by violin, rather than accordion or cello, and to hear Ruth harmonising strikingly with Griffith's deep, unorthodox and powerful voice. The guest even does a well-received solo vocal at the keyboards.

After a 20-minute break in which the impossibly friendly star turn accedes to my various grasping requests - signing CDs, telling me about her next project (which will feature a 12-piece band) and listening to my travelling itinerary - the duo returns for more. As a bonus for particularly nosey front-rowers (specifically myself), there's a hushed, backs-to-the-crowd run-through of Johnny Be Fair beneath the hubbub of interval chatter before the show restarts.

Indeed, it's that glorious gateway drug that gets us back underway - a tale of possible incest delivered with a boisterous sense of glee. The jaunty number is followed by an audience request at the keyboards, Ruth pitching us into the emotional torment of Geordie lament Waters of Tyne, with her unforgettable handling of that gobsmacking opening salvo: "I cannot get to my love if I would die..." The Hedger and Ditcher is less fraught thematically, but Notman's sensitive, knowing vocal nails both the song's uncertainty and its wry humour.

Once more, such heartfelt, slower fare is offset by catchy, sing-along tunes: Celtic standard Rory O'McCrory (a song that leans on Ruth's heritage; her Irish mother is in the audience) and a fast, increasingly raucous But Still I Love Him, one of the highlights of Threads - and indeed of the past decade, all told. Here the narrator suffers at the hand of a bad boy, who carouses on her cash, tears up his presents to her and refuses to tuck in his shirt. When Ruth mentioned at university that she thought the song was funny, a classmate told her: "You're sick." Apparently there's an alternate version where the man beats the girl to death.

After a spectacular duet on Life of Lilly climax Hold Back the Tide - sans accompaniment - Griffith treats us to a trio of reels (and Ruth joins us on the front row), before the pair reunite for Country Life, which is categorically "not about the butter". (Shame. Sandy did a killer butter ad - the wonder of the vocal only slightly undercut by the sound of my soul crying - and even John Lydon's had a go. Who's next? I would personally welcome Lou Reed.) Forgotten lyrics and all, it's a joyous end to a show spotlighting Ruthie's myriad virtues: strong songs, a fine line in between-numbers goofing, and the most exciting voice I've heard in 10 years. She was really lovely too - we went and bothered her again at the end, for a photo. There it is at the top.
Posted by Rick Burin at 19:47