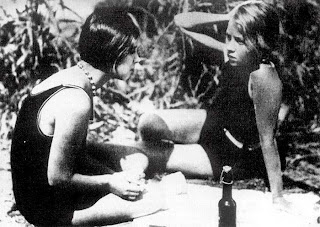 *VERY MINOR SPOILERS*
People on Sunday (Robert Siodmak and Edgar G. Ulmer, 1929) is a sunny, carefree holiday film that's remarkable in a half-dozen ways. There's the sense of ambition, with incisive use of cross editing and jump cuts that's about 40 years ahead of its time. The use of non-professional actors well before "neo-realism" entered the filmic lexicon. Its portrait of pre-Nazi Germany: charming, accessible and somehow familiar, without the debauchery and excess commonly attributed to the Weimar Republic. Then there's the laid-back, quiet sexiness in the film's evocation of young lust that's unlike anything else in '20s cinema (I'm referring to the beachside frolicking, rather than the schoolboys slapping each other on the bum). The celebration of weekend freedom that's influenced everything from Bank Holiday to Spare Time to Human Traffic. And the truly staggering collection of talent associated with the movie, including five future Hollywood directors and an Oscar-winning cinematographer. Noir legend Robert Siodmak (The Killers, Criss Cross) helmed the film, assisted by B-movie legend Edgar G. Ulmer (The Black Cat, Detour). Billy Wilder (Sunset Blvd., Some Like It Hot) wrote the dialogue-free scenarios, based on an idea by Siodmak's brother Curt, who later penned The Wolf Man and directed some horror dross. People on Sunday was shot by Eugen Schüfftan - who photographed Eyes Without a Face and The Hustler - with help from From Here to Eternity director Fred Zinnemann. Yes indeed. That clunking sound you may have heard was my jaw dropping on the floor when I first read about this movie.

The story is simplicity itself: a taxi driver (Erwin Splettstößer) and a wine seller (Wolfgang von Waltershausen) take a pair of girls (Brigitte Borchert and Christl Ehlers) from Berlin to the country for a blissful, lazy Sunday, while Erwin's model girlfriend snoozes in bed. The quartet laugh, play, argue and flirt, as one coupling peters out and another holds strong. Both romances feature the same man, incidentally, illustrating the modern attitudes permeating this highly watchable, fast-paced film. The scale of invention is on a par with the dizzying Russian documentary Man With a Movie Camera, released the same year, but it's put to better use, serving an immensely engaging story with a rich rural atmosphere. Renoir must surely have seen this before preparing his own heightened, pastoral film, Partie de campagne. The non-professional actors, all essentially playing themselves, are extraordinarily naturalistic, enhancing the singular feel of this thoroughly lovely film. (4)

Trivia note: The BFI release features a brilliant score by Elena Kats-Cherin. The DVD's accompanying booklet includes an interview with Borchert published shortly after the film's release. Though the movie was a huge hit in Germany, she confides to the reporter that her friends didn't enjoy it, as it was too similar to their own lives.
Posted by Rick Burin at 14:44