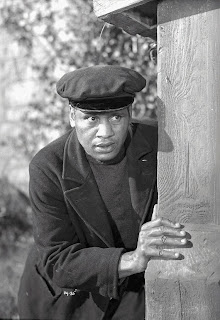 Ten years ago, I read a piece by the socialist politician (and personal hero) Tony Benn in which he wrote about his three favourite moments in film. One was the band sequence in the Powell and Pressburger masterpiece The Life and Death of Colonel Blimp (see #2). Another was the tear-jerking climax of The Railway Children. The third came from The Proud Valley, a vehicle for that icon of black America, Paul Robeson, set in a Welsh mining community. Here's what he wrote:

"A black Pennsylvanian man starts work in a South Wales mine. The other miners are not too happy that he is black until they realise that they are also blackened. In my favourite scene a choir is singing at the eisteddfod, but the lead singer is not present. The conductor is about to sing the solo part when they hear Robeson singing outside and are spellbound."

Benn slightly misremembers the story, since the racist characters are never shown to accept Robeson, despite his friends pointing out that they are "blackened", but his words on the film remain very moving. They certainly sold me on wanting to catch the movie, which I've finally done (10 years on!), thanks to the recent Optimum DVD release. In all honesty, The Proud Valley isn't as poetic, subtle or timeless as Benn makes it sound, but it does have some wonderful moments.

Robeson's David Goliath is a gentle giant who pops up in the Welsh mining village of Blaendy. Initially joining forces with terrible busker Edward Rigby, he gets an in with the locals via his remarkable voice. As Benn says, the scene in which he blesses choir practice with a mesmerising solo from the street below is tremendously effective. It would be even better if Rigby hadn't been prodded into providing some unsuitable comic relief just seconds into Robeson's performance.

The film has been praised for its complex characterisation, but compared to the twin peaks of this sub-genre, The Stars Look Down and How Green Was My Valley (see #19), it's shallow at best. The pro-union politics are also muted, aside from a poorly-executed if heartfelt variation on the Jarrow March*, but the film is notable for the friendship between Robeson and his white co-workers. Graham Greene heaped opprobrium on the presentation of the star, saying he was a "big black Pollyanna", keeping "everybody cheerful and dying nobly at the end". But while I'd agree that Robeson's death is entirely unnecessary and difficult to take (why couldn't a white character buy it in the final scenes instead?), the film's treatment of race is still far more progressive than in most Hollywood films of the period.

The notable exception would be Dr Kildare Goes Home, released the same year, a standard series film featuring the remarkable sight of a black doctor going about his job without comment on his colour. Disappointingly, given Robeson's standing as a leading trade unionist, his David Goliath sticks around in Blaendy for personal reasons, rather than ideological ones, but tellingly the actor said it was the only work of which he felt complete pride. Incidentally, the Herbert Marshall who penned the story was not the urbane leading man, but a left-wing playwright.

The performances are spotty. Robeson, though he has tremendous presence, is only adequate in dramatic terms, leaving Rachel Thomas to scoop the acting honours. Playing an unbending, fiercely proud but desperately poor mother, she does well in her first film, with what's really quite a cliched part. She reminded me a lot of Mary Gordon, the Scottish character actress who had so many nice parts in Hollywood during the '30s and '40s, most memorably in The Irish in Us.

The Harrogate-born (wooh! yeah! Harrogate!) Edward Chapman, best known today for appearing in the atrocious sci-fi movie Things to Come and playing Mr Grimsdale opposite Norman Wisdom, is also decent as the choir leader and town father figure. Chapman demonstrated his conciliatory, pro-union credentials in real life by trying to get John Gielgud thrown out of Equity for having gay sex. The Proud Valley also offers a cardboard romance between miner and management hopeful Simon Lack and Gail Patrick clone Janet Johnson, whose shop-owner mother is really hateful ("Before long, me and my girl will have cleared right out of this poverty-stricken hole" she says at one point), and a couple of tense sequences dealing with mine collapse.

It's an extremely erratic film. The production is slightly slapdash, sometimes cheap-looking and featuring sloppy editing. But every so often there's a painterly, artistic image that takes you completely by surprise: miners disappearing into the black; a slow, upsetting shot of bodies in rubble; townsfolk singing and praying in the dying light, before the motionless wheels of stalled industry. Likewise, while the plotting is often naive and over-convenient and the elements dealing with the outbreak of war are crowbarred into the narrative, the film ends in unexpectedly powerful fashion, before inexplicably leaping forward in time, robbing us of a reunion scene or the chance to pay tribute to Robeson's tragic hero.

Thankfully, the film has a calling card more wondrous than almost any other: Paul Robeson's voice. He only has around six minutes' worth of songs, but from his street-side solo to the take on Land of My Fathers that soundtracks the movie's coda, the sound of Robeson's booming, awesome baritone stirs a feeling quite unlike any other. Just a blast of it is enough to make the hairs on my neck stand up, and his version of Deep River, sung at a critical juncture of the film, is intensely moving. While not the lost classic I was hoping for, The Proud Valley remains an interesting work and - in those few Robeson songs - has a clutch of great moments to be savoured in joyous isolation. (2.5)

*Trivia notes: The Jarrow March is a key touchstone of the classic TV mini-series Our Friends in the North. The Proud Valley was the first film to be premiered on radio, with the BBC broadcasting an hour-long version edited from the soundtrack.
Posted by Rick Burin at 14:37