Warren William, The Girl From the North Country, and peaceful protest – Reviews #271

It's not all profiles of people from the 1930s, occasionally I review things that have just happened. But only if they're set in the 1930s.

This new Old Vic production is a jukebox musical of Bob Dylan album tracks, allied to a Depression-era melodrama, and nearly as good as that sounds. Written by Conor McPherson, it takes place in a guest house in Dylan's home town of Duluth, Minnesota in 1934, where owner Nick Laine (Ciarán Hinds) cares for his wife Elizabeth (Shirley Henderson), who's animated by dementia, while trying to pair off their pregnant daughter (Sheila Atim), navigate an affair with a long-term tenant (Debbie Kurup) and cater for two strange man who arrive in the dead of night: bible salesman Michael Shaeffer and ex-boxing champ Arinzé Kene. All of them are waiting for their ship to come in.

The numbers are brilliantly chosen, adapted, staged and sung, ranging from a yearning duet on 'I Want You' (slowed down as it always should have been, and performed by parting couple Sam Reid and Claudia Jolly) to a dynamic, ensemble 'Slow Train Coming' and a climactic medley of 'Duquesne Whistle', 'Make You Feel My Love' and 'Is Your Love in Vain?', all accompanied by a period-appropriate Bluegrass ensemble. Even some of the more peculiar ideas, like commandeering that ode to gloriously malignant petulance, 'Idiot Wind', as a Dustbowl lament, leaning on 'Seňor' or making 'Like a Rolling Stone' a ballad, come off really nicely, with 'Jokerman' effectively reprised and 'Forever Young' finally where it belongs: as a West End weepie. (Other songs utilised include 'True Love Tends to Forget', 'Tight Connection to the Heart' and 'You Ain't Goin' Nowhere', not perhaps the most obvious Dylan tracks, but more the welcome for it; the eponymous track, from The Freewheelin' doesn't get an airing.)

At times the scenes around the music can be too vague or muted, but there are moments of resonance − and bits of tension created from thin air − before the narratives coalesce satisfyingly (but not too conveniently) in two moving final scenes. There perhaps isn't enough at stake, or at least enough that's truly tangible in the script, but perhaps future viewings would reveal hidden depths or further truths. I enjoyed Kene's performance, and the voices of Atim, Reid and Kurup (whose stately grace and absence of self-pity still lingers), though I struggled to take my eyes off Henderson whenever she was on stage.

I've never been that taken with her, seeing her in films, but she has such a presence and physicality, flitting between pitiful and sensual, rabid and comatose, that I was transfixed. Though I tend to have a problem with portraits of mental disintegration which are big and tic-laden (as the journalist Tim Lott once wrote, a realistic piece of fiction about mental illness would just be very boring), this one managed to be funny, intelligently allegorical, moving and somewhat unpleasant, without traversing into unbelievability or hysteria, while her moments of lucidity unveiled an unexpectedly beautiful voice, shot through a Scandi-Minnesotan lilt. It's her, the songs and the atmosphere of quiet desperation which I think will stay with me. (3.5)

See also: I've written about a few other Old Vic plays, including Clarence Darrow, The Master Builder, The Caretaker (which I didn't care for), Groundhog Day (my favourite theatrical experience of last year), and King Lear. 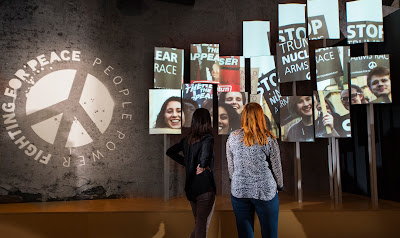 People Power: Fighting for Peace (Imperial War Museum) is impressive, multi-faceted and a little unfortunate in having to follow the V&A's Disobedient Objects, which is one of the best exhibitions I've seen since moving to London, and dealt with a similar theme: public protest. Here that's scaled down to protests for peace, and zones in on four big British protest movements, those of conscientious objectors in World Wars One and Two, the CND campaign that ran throughout the Cold War (with a little on Vietnam), and the Stop the War coalition which protested Tony Blair's invasion of Iraq.

That's both its strength and its weakness: it has a formidable mixture of exhibits: striking banners, poignant paintings, and arresting posters, trinkets and oddities (from CND pin badges reading 'Guardian Readers Concerned About the Bomb' and 'Clouseau Fans Against the Beumb' to a protestor's accordion), alongside audio snippets also transcribed on a display screen, and fascinating archive videos: one shown via a dozen faux-placards forming an irregular whole, others sharing snippets of news reels, news reports and public information films.

One of those, offering advice on how to survive a nuclear blast, is comically, depressingly and appositely juxtaposed with Peter Watkins' chilling film, The War Game, which showed British unpreparedness and was subsequently banned by the BBC, which had commissioned it. The flip-side is that the exhibition doesn't necessarily have a sufficient through-line explaining or investigating the continuity of pacifism, while its personal case studies − including one of Paul Eddington, a CO during WWII because of his Quakerism − are sometimes too brief and slight to really hit home. Having said that, one inspired inclusion is that of hate mail sent to successive generations of those who excused themselves from war, written by ordinary men and women whipped into a patriotic, judgemental fever by politicians and press.

In that way, People Power allows us to appreciate that where British current affairs are concerned, there is nothing new under the sun. It also offers a huge amount to see, and has plenty to say on the iconography, idealism and discomfort of pacifism, though I found Disobedient Objects somehow more inspiring, perhaps because of its internationalism and diversity of activist art, or perhaps simply because it celebrated causes that are simply more easy to embrace, several of which actually won. The final room here tries to send out on an upbeat note, saying that another British war was less likely after Iraq, but all I could think was that Corbyn only stood a chance in the election because he vowed to keep Trident, and that I don't necessarily disagree with that. (3.5) 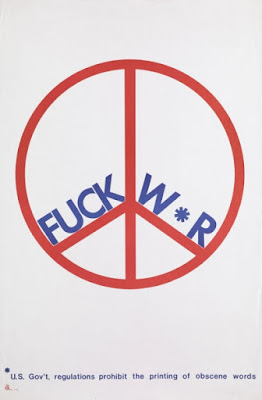 I liked this poster, which highlighted the hypocrisy of America at a time when anti-war posters (like the 'Fuck the draft' one above) were being seized under obscenity laws. Not much has changed.

See also: I wrote about the IWM's 'Real to Reel' exhibition last year. *** 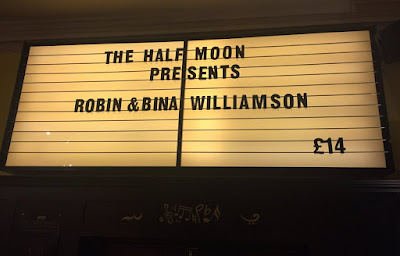 Robin and Bina Williamson (The Half Moon, Putney) – An evening with 'the mystical one' from '60s psychedelic folk heroes The Incredible String Band, Robin Williamson, who's long since stopped singing his old stuff, and now sings much older stuff: Celtic and pioneer songs, accompanying them on the harp and guitar. He's joined by his wife Bina, who seems lovely, but is a bit of a Yoko: while her voice works OK in harmony, it can't sustain songs by itself, and her psaltery-playing seems to require such concentration that there's no room for expression or timing. 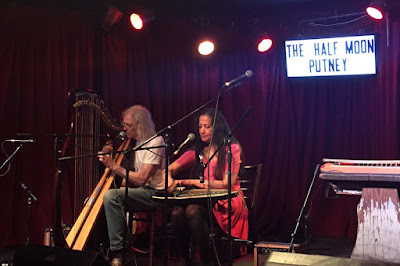 Williamson still has it, though: that distinctive voice, topped by a slight clicking lisp, and the same mesmerising gift for fretwork and fingerpicking, poured into a dozen songs, each either contextualised or prefaced by a story or gag. Who knew that the mystical one would have such a weakness for delightfully terrible puns. Seeing a musical visionary, still performing a half-century on, was a rarefied and special experience, especially doing so in the back of a London pub along with just 30 other people. It might have been even better if he'd had the spotlight all to himself, but they're clearly in love and he's clearly in thrall to her talents, so good luck to them. (3) 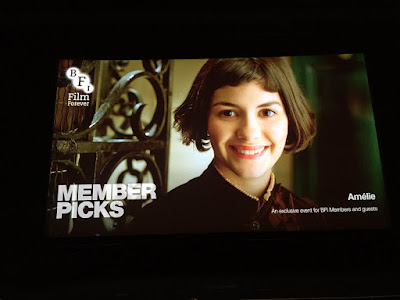 CINEMA: Amélie (Jean-Pierre Jeunet, 2001) – This film is so personal to me that writing about it honestly would be like posting my diary, so I'll just say that while one could harp on endlessly about its shots, its structure, its score and Tautou's mesmeric central performance – and although those elements are almost without equal – it's the film's intensely beautiful heart that takes my breath away every time. I can't believe I just got to see it on the big screen. (4) 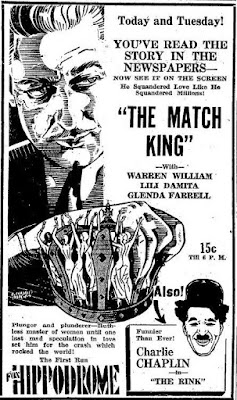 The Match King (Howard Bretherton and William Keighley, 1932) – I bow to no-one in my appreciation of pre-Code Warren William vehicles, but this one's a bit of a mess. It's quite fun, though. The film kicks off with a pre-credit sequence (surprising, since the earliest pre-credit scene is generally cited to be Crime Without Passion, which came out two years later), showing how important and ubiquitous matches are. Then we're into the story proper: a thinly-veiled biopic of Ivar Kreuger ('Paul Kroll', as he is here), the Swedish-born conman who had died earlier that year (and was immediately immortalised in a novel), having cornered the world market in matches.

It begins uproariously in the amoral Warren William tradition, the star selling out friends, pimping out girlfriends and swindling bankers on his way up the ladder. But then it turns into a romance featuring Lili Damita, a business drama full of laughably bad expository dialogue, and finally a morality tale that exposes the star's limitations. He was always a dynamic scoundrel, but just opening your eyes very wide isn't enough for the serious bits. If you like pre-Code cinema, it's worth a look, with some scurrilous plotting, saucily suggestive near-nudity, and bits for Glenda Farrell and Claire Dodd, while its neat final line anticipates the capper to The Roaring Twenties' rise-and-fall narrative, but it seems to have been written, shot and put out in a tearing hurry, with flubs left in the finished film, haphazard editing and an increasingly crap screenplay. Plus Harold Huber pretending to be Portuguese. (2)

See also: I wrote about The Mouthpiece, a better Warren William film, also found on the Forbidden Hollywood, Vol. 10 box-set here. His two defining films, Skyscraper Souls and Employees' Entrance are on Vol. 7, which I wrote about at length here. 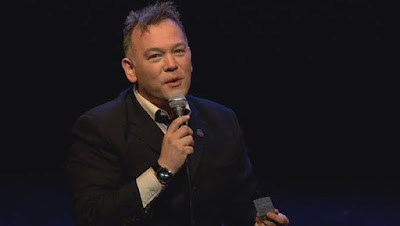 This is perhaps Lee's best show, with a pair of inspired, extended set-pieces about Top Gear and Magners Cider that take unnerring aim at casual racism, manufactured outrage, and the corporate co-opting of the art, history and communal experiences that we treasure. The interview with Kevin Eldon on the DVD is a real bonus too, a fascinating insight into Lee's psyche, character and work, which reached some kind of apogee with this daring, thematically and formally original, consistently hilarious act: part deconstruction, part tightrope-walk, part epic fantasy about Richard Hammond being decapitated. (4)

Thanks for reading.
Posted by Rick Burin at 20:18