REVIEW: Angels in America − Part One: Millennium Approaches at the National Theatre

You can see the play at the National Theatre (a limited number of day tickets are available for every performance, on sale at 9:30am beforehand), or via NT Live. 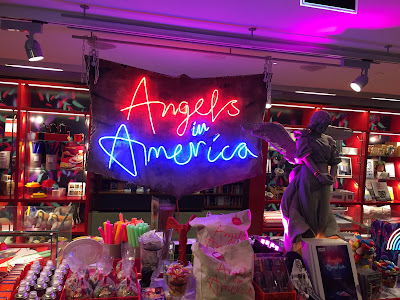 I only knew this play from one scene, the highlight of NT50, a decidedly patchy nationally-broadcast celebration of half a century of the National Theatre, which proceeded to confirm to half the country that they really don't care for theatre. In it, Andrew Scott's fey, muscular, aloof Prior teases his lover Louis (Dominic Cooper) about becoming the butch "Lou" when he's around his own family, before revealing that he's dying, via the sudden exposure of the lesion on his arm. The way the scene shifts from catty camp to stoical sincerity, via linguistics, Judaism, death, seeming to cast its net so wide across the gay experience, marked it as a piece of urgent, intelligent, human writing, and confirmed what has been readily apparently to those more knowledgeable than me for years: Andrew Scott is quite something.

Now Tony Kushner's play is back at the National Theatre, where it premiered to UK audiences in 1992 a year after its American debut, with Andrew Garfield in the Scott role and James McArdle in Cooper's, as part of an ensemble featuring Russell Tovey, Denise Gough, Nathan Lane and Nathan Stewart-Jarrett.

It's billed as 'A Gay Fantasia on National Themes', and that's about the size of it: a waspish, tender and abstract state-of-the-union address, full of hallucinations, flights of philosophy, self-reproach and humour − it's far funnier than I expected − but completely sure-footed, never spinning into self-indulgence or triviality, and with such a variety of ideas, jokes and language that it reminded me of Truman Capote at his best. Set beneath the neon striplights of an unforgiving New York, a sort of Hell, haunted by the spectre of the AIDS pandemic as the Millennium Approaches, it follows a vivid assemblage of damaged souls, from Gough's valium-addicted housewife, hiding from an abusive childhood, to her closeted, straight-backed husband (Tovey) and his father figure, Roy Cohn (Nathan Lane), a genuine figure in 20th century American politics, who trained under Joseph McCarthy and mentored one Donald J. Trump. 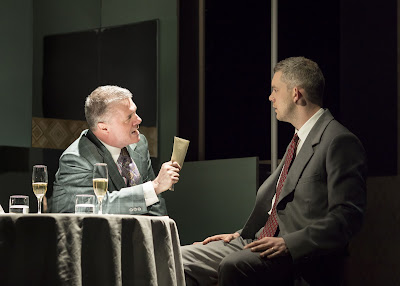 Cohn, as envisaged by Kushner, is a brilliant character, and this is a simply brilliant characterisation. On one level he is so clear and commanding, so assured, so rendered in coal-black and Vanish-white, an unshakable monolith rooted in an immovable Americanism, and yet there are layers within layers, so many of them grey, and each lit up by the scene, and by what Lane seems to play between the lines. We see him first as a sort of barking barrel on little legs, roaring into his phone like a wackily irascible '30s screwball character. That blustering fury is part of his persona, but the blistering, hollering rage that comes later is part of his personality. Cohn seems at first full of contradictions, but they're not contradictions, they're contentions as firmly held as his believe in robust, right-wing America. He loathes traitors, but sees his disavowal of his orientation not as a betrayal of a community to which he doesn't believe he belongs; for him, betrayal would be accepting the lowly, put-upon place of the 'homo' in American life. And so, as he explains to his doctor (Susan Brown): "Roy Cohn is a heterosexual man, Henry, who fucks around with guys." The awesome power and nimble timing that Lane brings to this role is extraordinary but, like every element of this production, it's regimented and restrained, part of a whole that moves sleekly and sublimely.

McArdle is excellent too as Louis, a verbose, liberal Jew whose idealism is tempered by a pragmatic discovery of his own limitations that saturates him with self-loathing, and unbearable guilt. His chemistry with Garfield is tender, his deftness with quickening streams of political consciousness is a feat of admirable, involving plate-spinning, and his emotional connection with the audience allows us into a character conspicuously lacking in heroism. 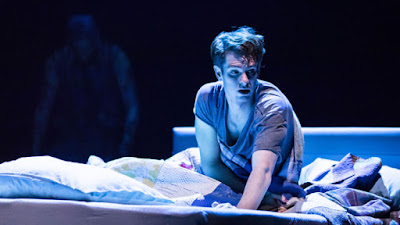 Garfield's role is more obviously showy, and his performance attracts superlatives, but he refuses to play Prior as a straightforward martyr. His Prior is effete, sensitive and even profound, with a natural grace and an affected gentility. He's also this first half's great victim, transfigured but more often disfigured by his disease, by mental torment and physical degradation; a character defined by his beauty, with an illness that's ugly and unforgiving. Stricken, with lesions on his skin; pouting, dressed as Norma Desmond; barking wordplay on a bench; reclining like a dying Greek God on a hospital bed, his homosexuality or his illness make him irresistibly otherworldly, touched as if by some secret spell. But in this first half, Prior is also slightly silly: a shrieking, bitchy, tart, vain queen (played without an ounce of vanity), and Garfield never loses sight of that dichotomy.

By contrast, Tovey's Joe is a model of Reagan-era repression, a clean-cut, ambitious forceful 'nice' guy struggling to reconcile his sexuality, his morality and the sphere in which he operates. I was a bit of a Tovey agnostic before this (I believe he exists, I just wasn't sure if I was a fan), but he struck just the right tone, and continued striking it with just the right variations. As his tortured wife, Harper, slipping from her pained existence into the welcoming embrace of fantasy, Denise Gough matches him: we want to protect her character from this self-destructiveness, we want her to be happy, or content, or free, but we also want her to stop lying.

But while Louis spouts democratic rhetoric, Joe voted Republican and Belize (Stewart-Jarrett) listens − boiling − to Louis' description of a post-race America, these characters are not conduits or manifestations of political positions. They're people who have ideas, not people who represent ideas. That's why they feel real. I also loved the way that Kushner's language is attuned to his themes, and that those themes are so wide-ranging and yet so specific. Millennium Approaches cast its view across a broad scope of American history, takes in all areas of American society, and then goes broader still. Without labouring his points, the playwright can evoke the ethnic cleansing of Native Americans, the rooting out of communism, the endemic racism against African-Americans, the self-satisfied, unthinking, privileged, hostile 'niceness' of Reaganite Washington, and the hole in the Ozone layer that no-one but the emotionally damaged gives a shit about, without having to ever compare any of these, explicitly, to the plight of gay men during the AIDS pandemic. 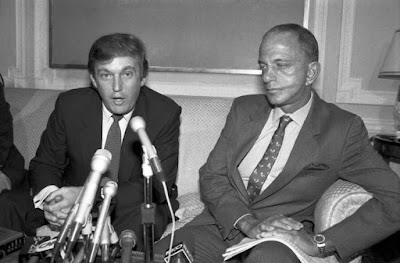 This revival is valuable too in reading present-day America. The people Cohn worked for (and namechecks) characters were − like Reagan −both political and pop cultural, celebrities who became celebrities because of their political power, and whose celebrity caused that power to increase exponentially: gossip columnist and commentator Walter Winchell, FBI chief J. Edgar Hoover, and red-blooded, red-hunting senator, Joseph McCarthy. All fine Americans, celebrated in their time for their strength, their weeding out of hypocrisy, and their obsession with the morality of private lives or of private political beliefs. Trump, though he's thick as shit, is a tub-thumping populist whose Americanism is similarly uncomplicated, and whose major calling card has been a ubiquitous celebrity, though he doesn't have the same concerns Cohn does about state officials being under Russian control. Nor is Trump's malevolence coated in the unwavering 'niceness' of Reaganism − who made people feel good about themselves, then looked the other way − it is sheer, toxic nationalism, which makes him more the heir to McCarthy and Cohn than Ronnie ever was. As much as anything, this is a play about both the ruinous effects of privilege − in which even a gay Jewish man whose lover is dying of AIDS cannot attempt to comprehend the African-American experience − and the blinkered guilt-saturated selfishness of '80s America ("All of us... falling through the cracks that separate what we owe to ourselves and... and what we owe to love," as Louis puts it). President Trump is both the scion and the defender of unthinking, uninvestigating privilege, while Reagan's America was the self-serving economic playground in which he began to pave his path to the White House.

As it contemplates these characters and draws those from history into its realm, its sprawling tentacles make the play feel like something in a hidden American tradition, the way Todd Haynes' Far From Heaven reinserted the nation's censored stories into '50s melodrama. It looks forward, back and around: absorbing the past (Jewish mothers carrying their world on their backs to the New World), staring dumbstruck at the present, and forecasting − via Cohn −a dominant Republican future, anticipating today's horror show, but little-knowing that the play's pop-culture savvy (with nods to Rosemary's Baby and The Exorcist) is probably going to be more valuable in understanding it than any knowledge of Washington history. 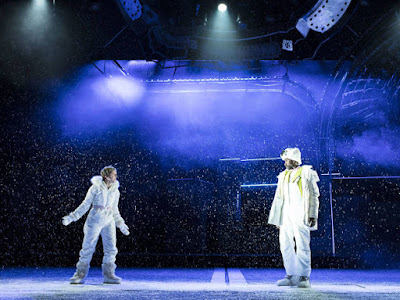 The play's stagecraft impeccably mirrors its subject matter. At first it's compartmentalised in three small sets (left, right and centre), its characters boxed off from one another, trapped in lives that are about to upended. Later the characters shout across one another: as they open up, so does the set, setting into motion the "connectedness" of which Louis speaks. Finally, the scenery moves back to make the most of a vast stage, as Garfield's descendants (a hilarious, Very Yorkshire Tovey, offset by Lane as a preening, powdered fusspot) pay him an unwelcome, hallucinatory visit, Gough retreats from her kitchen floor to see the Ozone layer up close, and Moon River pipes up from somewhere giving us a hint of a Hollywood ending as false as those always are.

I can gaze perplexed at some gay culture − when it's gaudily sleazy, I tend to feel either disinterested or uncomfortable; at others times I find its reductionism baffling, seeming to define gay people only by their gayness − but I suppose this is like how those who are LGBT might enjoy the album Liege and Lief but hate Transformers, the defining criteria of the art isn't the sexuality underpinning it, but whether it's really good or rubbish. You'd have thought a Corbyn voter would have known that.

One line in particular ("You're old enough to understand that your father didn't love you without being ridiculous about it") makes a dizzying comic leap that brings understanding and recognition in lapping waves of laughter, having audaciously vaulted over the expected exposition or consolation to land effortlessly on its feet.

I was blown away by Angels in America: this clear-headed, literate and ambitious piece of art; by the precision and variety of its ideas, the breadth of its imagination, the variety of its expression (in language alone, it moves from absurdity to knowingly long-winded verbosity, to wit, to caustic one-liners, to an unexpected bluntness that really works in such small doses), and by how unexpectedly enjoyable and funny and entertaining it was. Only a month to wait till Part Two. (4)

Thanks for reading.
Posted by Rick Burin at 20:41