Dorothy McGuire, The Battle of Algiers, and finally finishing His Dark Materials − Reviews #271

Following the frankly unnecessary exertion of writing 9,000 words about FDR and contemporaneous cinema over the past week, I hope you'll forgive this piddling effort, which covers three films and a solitary book.

The Battle of Algiers (Gillo Pontecorvo, 1966) − A pulsating, gripping, brilliantly-directed docu-drama about the Algerian revolution, which works as a history lesson, a thriller and a study of a handful of memorable characters on both sides of the battle, all augmented by Ennio Morricone's exceptional score.

It's an invigoratingly cinematic film – full of handheld action scenes, suspense sequences and tersely, grittily real exchanges – and just as intellectually stimulating, asking us to weigh the morality of political violence, of torture, and of the disconnect between state-sanctioned military action and terrorism.

Those are even bigger issues now than they were in 1966, and with its scenes of bombs in public places, vans mowing down civilians, and young men and women being radicalised by colonial aggression, the film chillingly foreshadows the current experience of Western city life.

I've heard for years how incredible this movie is, but it's not, it's way better than that. (4) 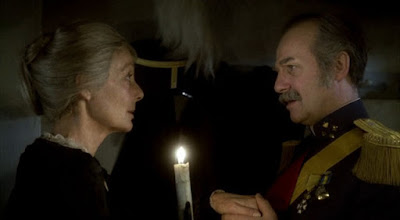 Babette's Feast (Gabriel Axel, 1987) − "Throughout the world sounds one long cry from the heart of the artist: 'Give me the chance to do my very best'."

And fuck me, Gabriel Axel's best is little short of astonishing.

Babette's Feast has been on my watchlist for years. It's conspicuously beloved by people who adore my favourite films, so I was pretty sure I'd like it too. It's a Danish variation on James Joyce's The Dead (perfectly filmed by John Huston in 1987), though with more jokes, as friends and acquaintances gather to evoke the past, and their conversation turns to memory, loss, food and faith.

Here, those friends include ageing sisters Birgitte Federspiel and Bodil Kjer, who have lived in the shadow of their late father, a puritanical parson whose influence saw them shake off their two suitors: a devoted, formerly dissolute soldier, and a great star of the Parisian opera. The latter sent the pair a gift in the shape of French housekeeper Babette (Stéphane Audran), and the former (Jarl Kulle) is coming to her dinner, being held to commemorate their patriarch's centenary, though the debauched promise of which sends the sisters into paroxysms of panic.

The film works miraculously as a drama, if only fairly well as a comedy, but those lighter moments do make the film more fun than a Danish movie concerned with reflection and lost love might sound − especially when noted collaborators of Claude Chabrol, the notoriously austere Carl Theodor Dreyer and the not overly vivacious Ingmar Bergman are flooding the cast.

It's a film full of painterly imagery, complex truths and quiet wisdom that echoes long after the curtain has fallen, and the virtuosic storytelling − hopping between time-frames, mood and media − takes the breath away. Though it's often labelled simply as a 'foodie film', it's hardly that, or else I'd have been bored rigid, being a tiresome vegetarian who regards food largely as fuel. It is, ultimately, a picture about time, love, and the gift of art. (4) 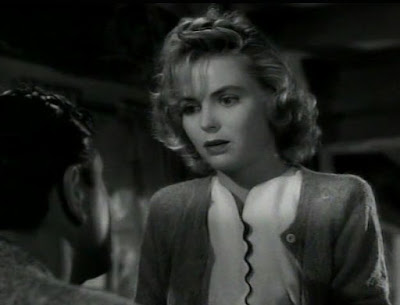 Claudia (Edmund Goulding, 1943) − An unusual comedy-drama about a naïve young housewife (Dorothy McGuire) whose callowness − and obsessive reliance on her mother (Ina Claire) − threatens to undermine her marriage to charming farmer Robert Young. The overarching story was probably more relevant in 1940s America than it is now, and the film never transcends the three-acts and one location of its source play, but it's full of good things.

Morrie Ryskind's screenplay (adapting a John Golden treatment of the Rose Franken original, which was based on a book) has lurches in tone, but its scenes of fast-paced absurdism and reflective sincerity are very effective on their own terms, and its treatment of growing pains, of relationship troubles − and triumphs − and the exquisite pain of loss is thoughtful and original. The real joy, though, is in the performances. Young could be dislikeable and one-note, but after a lightweight start, and with decent material (H. M. Pulham, Esq., Crossfire), he was a fine actor, and he's terrific here: the pivotal phone call scene, acted − of course − on his own, requires poise, timing and a broad range of subtle emotion, and he's up to it. Though Olga Baclanova is absolutely unbearable in a cacophonous, tone-deaf part as a Russian opera star, there are strong supporting performances from Reginald Gardiner − the best of his 'objectionable cad' parts, with some lovely understated touches (putting on the glasses!) − and Claire, terrific in a well-written part that has no room for easy sentiment (even if her intensely close relationship with Young is a bit... odd).

The film is most notable, though, as McGuire's screen debut, as she arrived with the play from Broadway, and proceeded to blaze a trail through '40s Hollywood, giving three of the greatest performances I've ever seen in 1945 alone (the final one, The Enchanted Cottage, re-teamed her with Young). Claudia gives her a rare chance to play comedy for close to an hour, and with a gloriously off-hand delivery, and that funny lilt in her voice, she's a whirlwind of unabashed, opinionated, guileless innocence. I'm not sure that the character she's playing makes for an entirely convincing whole − like the screenplay, it's made up of brilliant sequences that don't necessarily gel − but she has some wonderful moments: not least the wordless passage in which she responds to tragedy by headbutting a wall, a gesture to which I've occasionally taken recourse. The climactic moment in which she comes of age is also wonderfully played, and shot with transfigurative beauty by Leon Shamroy, in a final 20 that finally discovers something cinematic in the material aside from close-ups.

Even if it doesn't all hang together, or speak to a 21st century audience in its basic premise, it's a fascinating film, and a fine record of several special actors close to their zenith. I'll never understand transformation scenes in movies, though: I always seem to fancy the 'before' more than the 'after'. Also, can I be very clear that I'm not talking about Transformers. (3)

Many thanks to Fint for the loan of this one. Follow him on the Twitter, he's brilliant.

See also: My review of The Spiral Staircase is here. I wrote about A Tree Grows in Brooklyn for MovieMail in 2014 (click to enlarge): 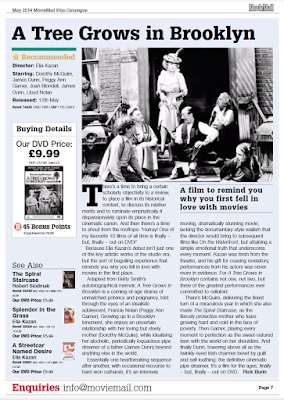 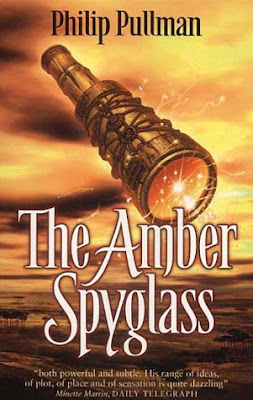 The Amber Spyglass by Philip Pullman (2000) − This final part of Pullman’s triumphant His Dark Materials trilogy is uneven, repetitive, pretentious, daring, rewarding and emotionally devastating. One wonders if a more forceful editor might have stopped the author keeping his heroine asleep for the first 150 pages, removed the much-maligned cattle-on-wheels (sorry, 'Mulefa'), and told him that you can’t simply compare the size of everything to hands, and yet this extraordinary, imperfect book scales untold heights, the alienating, pretentious scope of its opening chapters giving way to an emotional intimacy that allows it to campaign for wisdom, for empathy, for noble sacrifice, for the sincerity of love, and the honour of rich, full lives, without having to spend too much time with a god figure called Metatron (it was that which stumped me first time out, leading me to leave this book on the shelf for the next seven years). The Amber Spyglass is an indictment of religion, but as a (decidedly moderate) Catholic it’s not necessarily one I disagree with, railing at the self-denial, hypocrisy, intolerance and viciousness that is organised religion at its worst – and the guilt that is, admittedly, an intrinsic and damaging by-product of my faith. Its war on God, though, certainly didn’t serve to cloud the majesty of much of Pullman’s vision, or the innate, intoxicating beauty of the Will and Lyra relationship, one of the great joys of modern literature. This book’s closing chapters will never leave me. (3.5)

Thanks for reading.
Posted by Rick Burin at 12:55