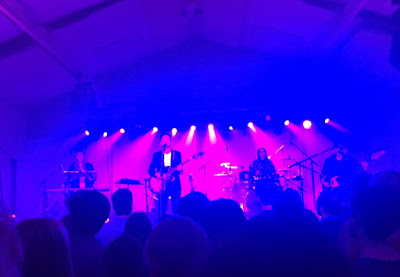 Jens Lekman is back and this time it's personal. For me.

My little brother's been a fan for years: a decade ago, I got him Lekman's second album, Night Falls Over Kortedala, for Christmas, and last year I bought him tickets to this show. He invited me to come with him, so I thought I better do some homework. For a month I listened to almost nothing else, first through a desire to not be bored at the show, and then after a few days because I'd fallen for his music: his wordplay (like Billy Wilder, in his second language, ffs), his absurdism and offbeat sentimentality, like a Wes Anderson film brought to life, but without the posing. As much as I love music, and as many gigs as I go to, it isn't often that I'm so attuned to an artist's music at the exact time their show rolls into London. So I was excited.

And then Jens came on stage at 9:15, to announce that he had flu, but was determined to do the show, provided he was sure that "you have my back, London". As he struggled manfully through a delicate 'To Know Your Mission', accompanying himself on guitar, my heart began to sink. He was nasal and a little laboured, with a severely compromised mid-range (or 'chest voice') that even his playful self-referencing − pointing to himself as his in-song avatar enters the action − couldn't distract from. And yet within minutes we, and apparently he, had forgotten all about his flu, his all-female band joining him on-stage and launching into a run of reworkings of songs from his new record, greeted with a succession of deafening ovations. He played just 70 minutes in total, but the audience left murmuring that it was one of the best shows they'd ever seen.

Oval Space, the venue, is a strange, erm, space. I imagine it's trendy. It's airy, with quite a high ceiling, and flanked by floor-to-ceiling windows on its right hand side, orange lights from houses hanging in the distance. So while it may lack the visceral, punky immersion of a dank, hot, low-ceilinged cellar, on the plus side it's actually quite pleasant to stand in. Jens comes on stage in a white t-shirt and black jacket, a black cap pulled down over his pale, shaven scalp. His face is slim and angular, full of striking planes, and when he takes off his jacket, he doesn't fill out his t-shirt. Nowadays every singer-songwriter seems to spend most of the time in the gym, working on their biceps, whereas Jens looks reassuringly and appealing like a man who spends his time writing songs and (according to a friend of a friend who knows him, washing-up at other people's house parties).

His first song with the full band is an extended version of 'What's That Perfume That You Wear', the most popular song on his new record, if Spotify is a decent barometer. I find the first half of its chorus a bit trite − it sounds like someone reading out a shelf at Boots − but then the pathos kicks in and half destroys you. Live, it's joyous, its quiet sorrow cowering behind an amp as Lekman's constantly pogoing bassist drives that highly danceable riff. We get a jangly, rocky 'Evening Prayer' − probably my favourite song on the album, a tale of empathy and 3D printers − a passable 'Hotwire the Ferris Wheel', and a committed 'How We Met, the Long Version', now given the epic sweep that it deserves as a musical equivalent of Malick's Tree of Life. 'Dandelion Seed' is beautifully rendered too, though Jens loses either his voice or his place for its key line ("I built a bomb-shelter under every dream"), robbing it of its climactic power. The other of the seven songs from Life Will See You Now is 'Wedding at Finistère', one of those songs you feel like you've always known, with an ingenious structure a perfect chorus. Here the choruses − accompanied only by claps − lack the certainty and rhythmic relentlessness of the record, but the song's still great fun, and Jens flashes his guitar angularly to drag us gracefully and stylistically back into each verse. 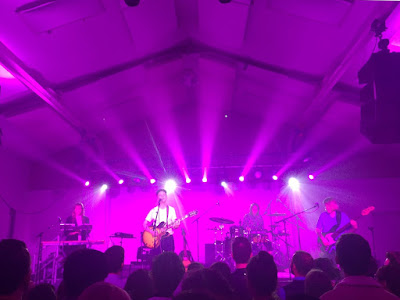 I've rarely seen a backing band look happier: the grinning drummer on backing vocals, the keyboardist pounding out Lekman's climbing melodies, and the leaping bassist's chemistry with Jens apparent, as she calls for us to celebrate his genius, and he skips over to give her a kiss on the cheek, in a fug of mutual fondness. Jens, meanwhile, swaps between electric, acoustic, and a keyboard/sampler/synth.

As a performer, he's as you'd expect from his autobiographical songs: playful and friendly, but also a showman, with star quality and ineffable, effortless cool that comes not from an arrogant self-regard, but his charisma and talent. On stage, he's intimate, conversational and even kind − standing on the raised stage telling us to look after one another in this scary world, saying a polite "welcome" and "welcome back" to fans news and old, and telling us, "I want to grow old with you people" − but he's also politely unapologetic about approach to his art. When he welcomes Parisian support act, The Dove & the Wolf, to join him for an old song, two fans begin yelling requests. "There's actually a song we've rehearsed," he says gently, but sarcastically, and they launch into one of them: 'Black Cab', his anthem of anxiety, self-loathing and catharsis, from his first real EP in 2003. He allows the audience to sing that great, self-referential line, "Oh you're so silent, Jens" (later the title of his early years retrospective_, with his backing singers helping him to belt out the plaintive chorus: those words "black cab", again and again, a clarion call for a man who just wants to get the fuck out of this party. It's pretty spectacular, and so is the atmosphere.

There are other early songs too, and he reshapes them all. "Don't let anyone stand in your way," he says, before launching into 'A Postcard to Nina', his tale of being the world's worst beard for a lesbian friend, which contains another masterpiece of self-reflexion ("Yours truly, Jens Lek-man"). He plays a stripped-down, apologetic 'I Know What Love Isn't', which he introduces by saying "I was in a cynical period when I wrote this" and then sitting on the stage for the second chorus, before climbing down to offer the proposal to a man at the barrier ("Let's get married… I'm serious…"). It segues into perhaps the best song of the night, 'The Opposite of Hallelujah' transformed from a passable 2007 single into a raucous, floor-shaking crowdpleaser.

Another highlight is 'Maple Leaves', which is charming and timeless on that 2003 EP, but live becomes a joyous, shimmering thing, Lekman's voice riding a wave of sound that recalls My Bloody Valentine or Jesus and Mary Chain. That closes the first encore, while the second finds him alone again for a song he hasn't played live in years ("so I'm sorry if I forget the words"), 'Cold Swedish Winter' from his debut album. It's soothing and touching and snowy and weird, and it ends with him singing the chorus more and more quietly, as the pink lights slink off his cheekbones to leave him in shadow. Glorious. Imagine how good he is when he doesn't have the flu. (3.5) 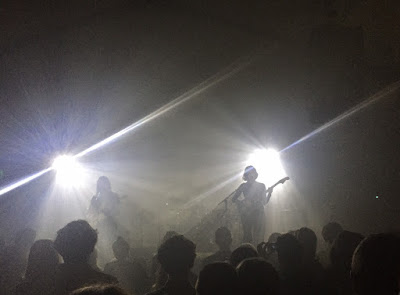 I caught half of The Dove & the Wolf's support set: they'd left their band in Philadelphia (which is a very rock 'n' roll thing to do), so it was just two women with reverb-heavy guitars singing haunting, introspective songs, silhouetted against great orbs of light.

Thanks for reading.
Posted by Rick Burin at 19:41