REVIEW: An American in Paris at the Dominion Theatre 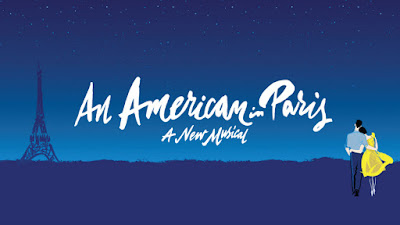 This explosive, intelligent stage version of MGM’s 1951 masterpiece, direct from Broadway, sags now and then in its book, but offers unmissable entertainment of a type rarely seen in the West End.

We began in the tumult of postwar Paris, less the escapist playground of the film and more a ravaged battleground where demobbed soldiers try to forget the war, women feel in perpetual danger and collaborators are being beaten and getting their heads shaved. Craig Lucas’s script offers a rejigged, re-ordered narrative that adds extra Gershwin songs (the film doesn’t have nearly enough), underscores the action with a battle fatigue that accentuates its more carefree moments, and leads to a putting-on-a-ballet climax that’s imaginatively conceived in narrative and artistic terms. 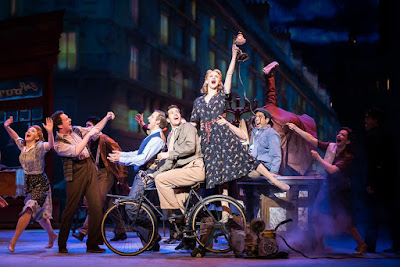 Its great masterstroke is turning the sardonic narrator from the grouchy, alienated middle-aged Adam played by Oscar Levant into David Seadon-Young’s war vet (above, left), an inspired innovation that lends a far greater heft to his sequences, if rather undermining the appeal of Jerry Mulligan (Robert Fairchild), one of three protagonists now in love with the same woman, the gamine ballerina, Lise (Leanne Cope, a worthy successor to Leslie Caron). Jerry is a painter who truly cares for Lise, but when you put this character into a more realistic, grounded world of Nazis, collaborators and the battle between duty and romance, his charming rom-com stalking comes off as a little thin, selfish and, y’know, sexist. The other romantic possibility for Lise is her fiancée, Henri Baurel (Hayden Oakley), a French aristocrat who dreams of being a musical-theatre star, and who here is a nervous, cautious man with a rather abrupt back story. 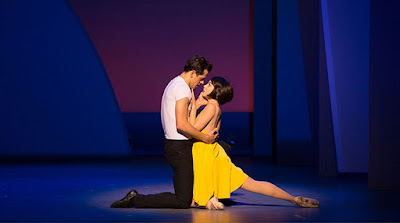 Fairchild and Cope (above) both originated their roles on Broadway, and they’re superb dancers, while transmitting the basic traits that make their characters appealing: Jerry’s ease in his skin, his irreverence and athleticism, Lise’s combination of the elfin and the erotic, a latent fire burning beneath an ethereality that – like Audrey Hepburn’s – seems dictated by the privations of war. Their characterisations can’t quite bridge the shortcomings of the script (Jerry’s quite selfish, Lise is something of a cipher), but their song-and-dance talents are unimpeachable. The moment that the climactic ballet explodes into sensual life is pure exhilaration, with shades of Bob Fosse’s revolutionary, finger-clicking goodness in Kiss Me Kate. In support, Zoe Rainey makes for a sparky, hugely appealing Milo (younger, and funnier, than Nina Foch), Oakley is pretty good balancing the inconsistencies of his character, and Seadon-Young is simply terrific as the lovelorn, limping war vet who channels his unhappiness and romantic impotence into his art.

The staging is similarly superb, making the most of the stage’s depth through some striking compositions, and mixing the irregular patterns and primary colours of ‘50s art with the more impressionistic style of the MGM film, and many of its most enchanting, striking and transportative effects achieved through brilliant projections and lighting. That sense of intelligent, contextualised innovation extends to the musical numbers, which are an absolute knockout. Beginner’s Luck is the epitome of vibrant, perfectly choreographed, 1950s-style showstopping magic, as Jerry crashes Lise’s workplace at the Galleries Lafayette perfume counter, turning the room into a riot of colour, extravagant hoofing and umbrellas. 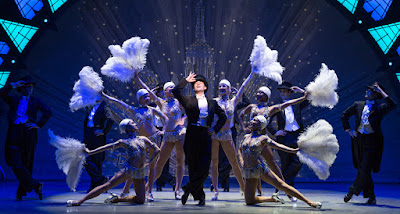 When Henri makes his live debut, we get all the art deco razzmattaz of a ‘30s Warner musical, but framed in the realism of an awkward, halting first show that explodes into fantasy. It’s lovely too that its post-modern but idealistic escapism extends to Adam losing his limp and getting to share the spotlight (though it loses a fraction of a point for Oakley being unable to hit that climactic top note, instead going down an octave). I Got Rhythm too tinkers with the film’s formula, bringing all three love rivals together for the first time and incorporating an inspired, hushed, candlelit middle-eight with diegetic sound. Character-led, grounded numbers that still thump it out of the park are about the best thing that musicals can offer, and there are several here. And though we don’t get the breathtaking Seine-side dance to Our Love Is Here to Stay that’s one of the MGM movie’s great virtues, this stage version does incorporate several Gershwin songs from other shows, including his fondest, saddest, most romantic creation – Our Love Is Here to Stay – as well as The Man I Love and, erm, Fidgety Feet. The vocals are strong while retaining a fair amount of the subtlety and personality that can be lost in musical theatre, and the orchestra is fantastic: punchy and precise, like John Wilson at his considerable best. 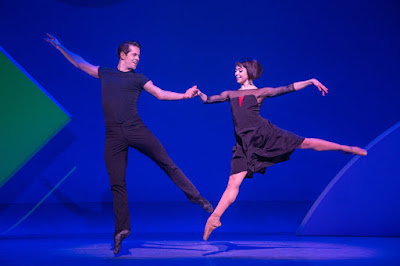 The show climaxes with a ballet that’s still a hypnotic fantasy of love, but now coupled with a putting-on-a-ballet climax, as Lise makes her first public performance, but can only acquire the requisite passion by calling Jerry to mind. For a little while you wonder if they’ve botched it by junking the movie’s journey through different artistic styles – though Singin’ in the Rain is now the best-loved and most-respected of all MGM musicals, in the ‘50s it was An American in Paris, and particularly this sequence, that was regarded as the studio’s supreme achievement – but with Jerry’s entrance it becomes a powerful, extremely sexy and all together beguiling proposition: the bob-haired Cope draped across Fairchild, or swaggering, shoulders-back, towards us, as he pirouettes furiously, exuberantly around the perimeter of the stage.

It’s a stunning highlight of a show that’s less slick, seamless and smooth in the book than it needs to be – the jokes are patchy, and a laboured subplot about Henri’s parents isn’t helped by shallow sentimentality and broad playing – but knows its strengths, with some intelligent weighting towards the political context, fine acting, and musical moments that are everything they should be and more. And since I was lucky enough to land a ticket for the first night, I also got to see Leslie Caron come and take a bow. (3.5) 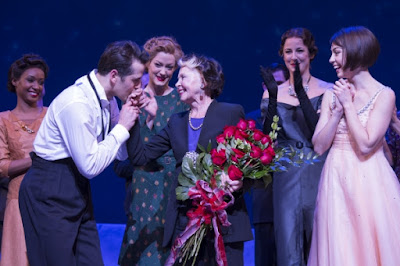 Thanks for reading.
Posted by Rick Burin at 12:52