More erratic adventures in culture, including – but not limited to – Terence Davies's worst film, Peter Lorre on the big screen, and one of the most beautiful books I've read in years. I've just signed up for Goodreads too, I'm over here if you're interested, but the reviews will all end up on here eventually. 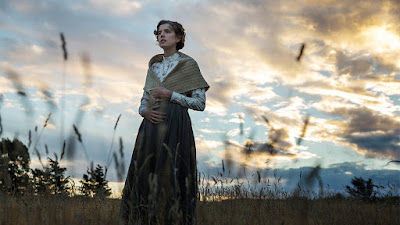 Sunset Song (Terence Davies, 2015) – I was lucky enough to interview Terence Davies in 2006, and even then – sidelined by the film industry and at a notably low ebb – he was talking about turning Lewis Grassic Gibbon’s Sunset Song into a movie. It took him nine years to realise that ambition, but I’m not sure why he bothered, or indeed what the point of this film is. I will always dearly love his early movies, and talking to Davies was one of the true highlights of my career as a journo (before I got tired of the stress and moved into creative writing and a job in the arts), but this film is not a highlight of anything, not even my weekend.

Agyness Deyn is Chris Guthrie, a rural Scottish lass who feels at one with the land, but not at one with her tyrannical father (Peter Mullan) – shades of Davies’s own childhood, so heartbreakingly rendered in his first film proper, Distant Voices, Still Lives. As everyday tragedy visits her family, she falls for sweet-natured neighbour, Ewan (Kevin Guthrie), but this is 1914 and damn it if the drums of war aren’t pounding in the background.

The film begins promisingly, but becomes increasingly boring as it progresses, with virtually no dramatic impetus. It’s no coincidence that the good scenes here – a sumptuous opening shot, soundtracked by the wind swooshing over a field of grain, the beautiful musical sequence that ends with a congregation walking into a church – are, like the great scenes in Davies’s earlier work, wordless.

Think of the ‘Tammy’ set-piece in The Long Day Closes (the greatest three minutes in ‘90s British film), the death scene in The Neon Bible, the sequence set to Peggy Lee’s ‘The Folks Who Live on the Hill’ in Of Time and the City, or the funerals in both Distant Voices (cut to Jessye Norman’s ‘There’s a Man Goin’ Round’) and his Trilogy (to Doris Day’s ‘It All Depends on You), and they are all just stately, beautifully composed shots set to music. Davies is a genuinely great and utterly distinctive director, but as he’s moved to more conventional narratives, his work has lost not only its brilliance, but also its coherence. He has little talent for filming drama and none for shooting sex scenes: the first half of Sunset Song builds to a night of passion which, as I’d been warned, begins with a close-up of a man’s hairy arse.

There are moments when the film gets to you. The compositions by Davies and Winter’s Bone cinematographer Michael McDonough are at times breathtaking (the horses in the thunderstorm!), and you’d have to be extremely hard-hearted to find none of the plot developments affecting, but even when Guthrie is changed shockingly by the war, there’s a suddenness and silliness that prevents you from fully investing in the story. Likewise, though Deyn is mostly in fine form, she’s wearing more – and more artful – make-up than is surely realistic, and has at least one moment of farcical overacting that wrenches you out of the story. And though Mullan is pretty commanding as the cruel patriarch, and the scenes in which his rage is only enhanced by becoming a tubby, floppy invalid are genuinely scary, he’s… y’know… a bit much.

I haven’t seen A Quiet Passion yet or, indeed, Davies’ Terence Rattigan adaptation, The Deep Blue Sea. But of his others, this is the weakest, and I say that as no fan of The House of Mirth. It’s a beautiful-looking piece of nothing, depressing without being insightful, eventful without being dramatic, and slow without being a slow-burner. (2) 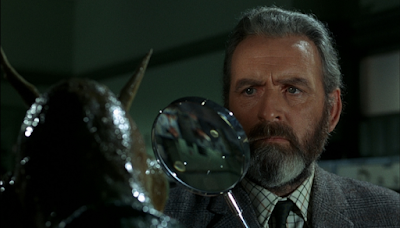 Quatermass and the Pit (Roy Ward Baker, 1967) – Each of Nigel Kneale’s Quatermass TV serials was made into a movie: The Quatermass Xperiment and Quatermass 2 had been monochrome outings starring fading Hollywood star, Brian Donlevy, each following two years after the small-screen outing. This one took four times as long to bring to movie audiences, and though that was down to money troubles, by 1967 Hammer could afford colour film, while the financial necessity of incorporating an American star had apparently evaporated, leaving the producers to make a purely artistic choice in Andrew Keir. (Fans remain divided on Donlevy – he has so much of my goodwill from movies like The Glass Key that my judgement may be clouded, but I enjoyed his stolid doom-mongering.)

The film begins at (the fictional) Hobbs’ Lane tube station, where TFL engineers unwittingly uncover a human skull, then another, and then a huge, unexplained… thing. The discovery brings together rocket scientist Prof Bernard Quatermass, the tiresomely officious and closed-minded Col Breen (Julian Glover) and a palaeontologist (James Donald) and his assistant (Barbara Shelley), the group remaining divided as to whether the untorchable, untouchable object is a V-1 bomb, a black propaganda exercise or the key to all human existence.

It's somewhat garishly shot and Kneale himself described the special effects as “diabolical”, but with 50 years’ hindsight, I found the technical primitiveness rather charming, while the film is unquestionably full of fascinating ideas about extra-terrestrial life, the occult and the evolution of man. Despite its general tendency to be somewhat static and talky, it also has several knockout set-pieces, the odd jump scare nicely complementing the eerie atmosphere generated by Tristram Cary’s score, and the mix of folklore, mysticism and science in Kneale’s politely whacked-out, cerebral script.

It’s not quite a great film, I don’t think, but it’s unusually innovative and intelligent, with one of my all-time favourite titles: you can read it a dozen ways by the end, and they’re all valuable insights into the film. (3) 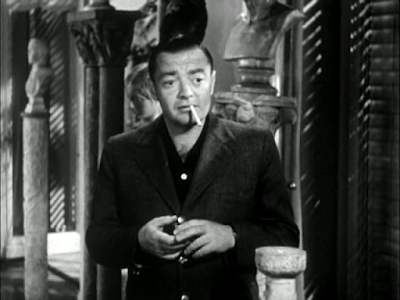 CINEMA: The Chase (Arthur Ripley, 1946) – Chuck Scott (Robert Cummings) is a war hero turned bedraggled bum who gets a gig driving around absolute psycho Eddie Roman (Steve Cochran). When Roman's wife (Michèle Morgan) tries to take a powder with the help of her chauffeur, we relocate to Havana, as Cummings flees for his life, with pop-eyed henchman Gino (Peter Lorre) on his tail.

This proto-Lynchian headfuck, based on a Cornell Woolrich story, starts promisingly, begins to flounder, explodes into life through a dazzling twist and then fails to adequately deliver on its vast promise and possibilities. It also has a little too much silliness to keep you truly immersed (special mention for the additional accelerator in the back of Cochran's car).

The Chase is an interesting and largely entertaining noir, though, with artful direction, some very effective flourishes in the script, and a decent cast – Lorre is absolutely sensational, yet again. His timing, his counter-intuition (funny when he could be frightening, moving as he chills the blood, menacing simply at will) and his ability to steal a scene using only a cigarette are the stuff of legend. (3) 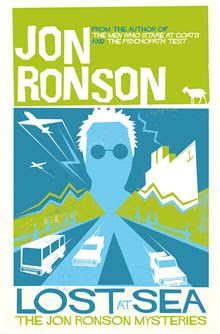 Lost at Sea: The Jon Ronson Mysteries by Jon Ronson (published 2013) – A collection of many of Ronson's finest features for the likes of the Guardian and GQ, from a deeply upsetting, unsettling investigation into sub-prime loans – published two years before the financial crash, and inspired by the suicide of a family man deep in debt – to the aftermath of a planned school shooting in a Christmas-themed town. Other pieces are more light-hearted, like his adventures with real-life superheroes and Deal or No Deal contestants, but none are trivial, each revealing something about humanity or the world we inhabit, whether looking at bravery, open-mindedness or the rationalisations we make for being callous.

Ronson's writing is as it always is: perhaps a little formulaic in structure, but crisp and economical, righteously angry and hysterically funny, with rich veins of humanity and self-deprecation running parallel through each story. It's his wit, honesty, basic decency and genuine curiosity that makes these stories work, preventing them from reading like exploitation or sensationalism, even though he exists to document the extremes of human behaviour. At least four of these articles have been included in previous compilations, but there are a total of 26 in the second edition of Lost at Sea, and it's worth every penny.

In recent years, Ronson has had major success with full-length books (The Men Who Stare at Goats, The Psychopath Test and So You've Been Publicly Shamed), but he does still write stand-alone stories, and his gift for getting to the heart of a story, and a person, over just a few pages remains utterly remarkable. (4) 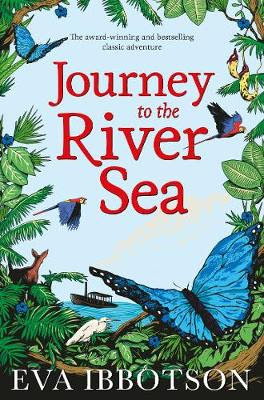 Journey to the River Sea by Eva Ibbotson (2001) – A beguilingly beautiful children’s novel about orphan Maia, who travels to Brazil in the early 1900s to stay with distant relatives. There, she’s tormented by her new-found family, but finds solace in her friendships with governess Miss Minton, a child actor named Clovis King, and a mysterious boy named Finn, while discovering escape in her exploration of the seductive, enrapturing world of the Brazilian jungle.

Ibbotson’s plotting is meticulous but effortless, her prose clean and economical, and her worldview exaltingly humane, without ever being cloying or naïve. She wrote the book when she was 76, but got the idea years before, entranced by the idea of the Manaus opera house, a home for the arts in the most chaotic and supposedly uncivilised of natural environments (the building was also the inspiration for Werner Herzog’s astonishing 1982 film, Fitzcarraldo.

I got hold of Journey to the River Sea to help me pitch my own kids’ book, and began reading with a sense of duty, but it knocked me absolutely sideways, and by the end I was choked to let it go. It’s timeless but modern, character-led but immaculately constructed, and paints a vivid and unforgettable portrait of early 20th century Brazil, while drawing much of its humour and conflict from the virtues and vices of Englishness. It’s unquestionably a great book, but perhaps more importantly it’s a good book: rich in human decency, and as deeply and desperately moving as anything I’ve read in years. A masterpiece. (4)

Now reading: The Authentic Death of Contentious Afterlife of Pat Garrett and Billy the Kid, by Paul Seydor.

Thanks for reading.
Posted by Rick Burin at 08:12