The latest in my now-almost-regular series. Recent articles include The Crying Game, Peter Lorre and Lillian Gish. 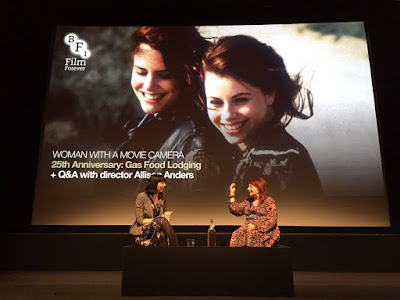 Yes, I do have excellent seats, thank you for noticing.

Allison Anders’ 1992 indie has been a favourite of mine for years. I’ve lost count of the number of times I’ve watched my battered, pan-and-scan VHS copy, taped off Channel 4 a few years later. I love Anders’ unique viewpoint – empathetic, unsensationalised, real – her film’s delicate balancing of emotions, and its aesthetic and emotional treats: J Mascis’s spare, evocative guitar score, Dean Lent’s decolourised, subtly beautiful cinematography, and Fairuza Balk’s performance, the greatest of a sporadically spectacular career in which she has been unfailingly fine, but in films only sometimes befitting her transcendent gifts.

She’s the teenage, introspective Shade, who lives with her sister Trudie (Ione Skye) and their single mom (Brooke Adams) in a New Mexico trailer. Like River Phoenix’s hero in Idaho, Shade is also searching for a family, but in an inert, haphazard way that keeps her within the boundaries of a drab, colourless small town. Ione, the town slut, has regular shouting matches with her witty, loyal, self-pitying mother, but both are masking a desperate pain, scrolling through romantic misadventures much like Shade’s heroes, those characters depicted by glamorous Spanish movie star Elvia Rivero in the local fleapit. 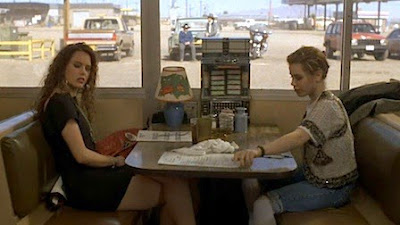 It’s a series of glorious vignettes – held together within an ingenious, elasticated structure – from those gloriously-realised films-within-a-film, a romantic encounter in a cave lit by violet light, and Adams’ charmingly weird ‘first date’ with an old flame, to Balk’s hilariously incompetent, profoundly moving seduction of Darius (Donovan Leitch, Jr.), and her gradual discovery of a soulmate in the shape of cherubic ‘cholo’ Javier (Jacob Vargas). Balk dominates throughout, with a performance of startling depth and beguiling sensitivity, though I don’t see it as the whole show, as I think I used to. Skye and Adams are both terrific (despite the odd wooden line-reading), James Brolin is superb as a benevolent stranger and, seeing the film as it should be – on a big screen, in a sumptuous new digital print – one is struck by the clarity of Anders’ artistic vision, her lack of judgmentalism, and her consummating shepherding of her creative collaborators, their talents drawn out and drawn together in the service of the story.

That story seems fresh now, was ahead of its time even in 1998, and must have been positively revolutionary six years earlier. Just watch Trudie’s departure for Dallas, a sequence that Kelly Reichardt would be proud of in 2017, and see how Anders deals with these female characters frankly and honestly, employing a deft, humanist poetry born of mutual dependence, pragmatism and real love, in place of the trite sentimentalism that dominates so much of cinema. And watch Balk trailing off into the brush, her ferocious loyalty and protectiveness of her spiky, abrasive older sister paying off not with a Hollywood ending, but with one that’s ultimately more satisfying, because it’s honest.

It's a great film. One of the great films. And, like Idaho, it's not flawless, but it's more important than films which arguably are. 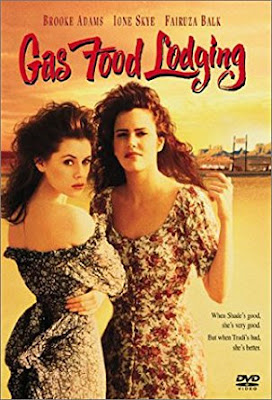 That absolutely American DVD cover (it's never been released over here), with a misleading photo and a dreadful tagline: "When Shade's good, she's very good. But when Trudi's bad, she's better."

1. Learning on a Wim
Anders was mentored by arthouse giant Wim Wenders, after a sustained campaign to win his favour that include writing him letters up to 30 pages long, and – with two of her friends – winning grants to study with him on the set of Paris, Texas, without asking him if it would be OK. When she did, Wenders looked into the distance, and said: “Oh well, you better come along then.” Dean Lent, who went on to shoot Gas, Food Lodging, studied cinematographer Robby Müller obsessively on the set of Paris, Texas. Her second mentor was Martin Scorsese. His Universal deal in the mid-1990s included the capacity to produce five smaller-budget features. His then-girlfriend, Ileana Douglas, asked for a meeting with Anders, they got on well, and decided to make Grace of My Heart (Anders’ 1996 movie, set in the Brill Building). Scorsese had planned a Lieber and Stoller biopic himself, but couldn’t get the knots out of his story. When Anders was briefly away from the Grace set, star Matt Dillon found himself working under Scorsese. “I can’t believe you left me with this hack,” he told her. 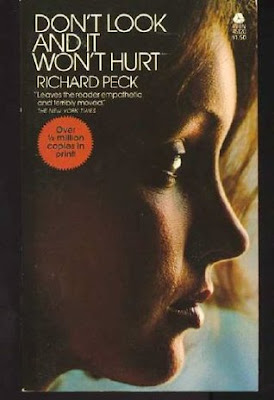 2. Chicago fired
Anders’ Belgian producer, Carl Colpaert, picked up Gas, Food Lodging’s source novel – Don’t Look and It Won’t Hurt by Richard Peck – at a thrift store for 10 cents, and optioned the rights. Anders wrote two drafts of the script, in the process scrapping the Chicago setting, streamlining Trudie’s character – “you can’t be both the town slut and the most popular girl in school”, adding a sex life for the mum (“a tired woman who just worked and raised the kids”) – and removing a third kid “because to be honest, [the mum] had enough to do”. By the time filming commenced, almost all of the material was her own. 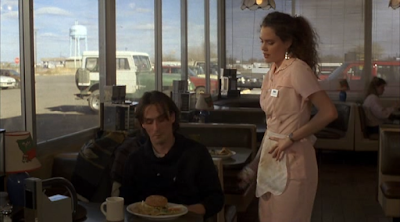 3. ‘I’m never gonna cease to roam’
The film was set in New Mexico “because the producers wanted to go to New Mexico”. Anders was determined not to shoot somewhere too beautiful, like Santa Fe, as the basic drabness of the setting was integral to her vision, which coupled the mundane and the magical. The scenes set inside the trailer were filmed in a trailer home, put in a warehouse for absolute control over the setting. 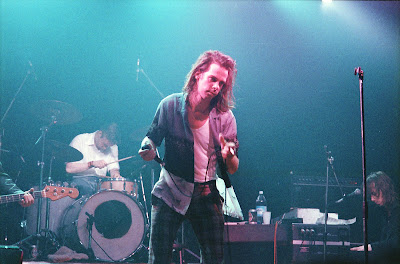 4. Caving in
Nick Cave was the original choice for Robert Knepper’s character, an English rock-collector, which would have been ideal, as he spends most of his time in caves. An unnamed, high-profile English actor was then cast, but then dropped out at the last minute. Anders apologised for Knepper’s accent, but it’s actually pretty good. 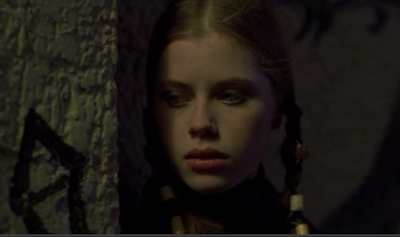 5. Balking at Barrymore
Anders tested "every actor of that age who is now famous" for the part of Shade, including Drew Barrymore and Reese Witherspoon. She wanted the character to have a range and complexity that was beyond the capabilities of everyone aside from Balk. "All the actors were either bubbly or dark, but Fairuza had that lightness and depth." In my question, I'd said that Balk was "so good" in the film. "Isn't she?!" enthused Anders, adding that she is "great in everything". (I've discussed Fairuza's erratic career here.) She singled out the scene in the hospital room (perhaps the greatest thing the actress does in the picture), joking that she was "incredibly grateful to Milos Forman, as he had taught her to cry effortlessly on demand" while filming Valmont. Anders said Balk's performance resonated so much because "she was quite like that character, and she had been raised by a single mum", as had Skye, while Anders and Adams were both single parents themselves. 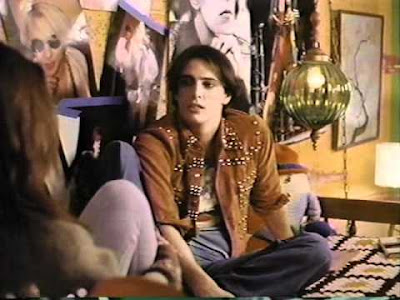 6. Darius' vassal
Is Darius, the object of Shade's initial affections, gay? Anders and her editor, Tracy Granger decided in the edit that it should be unresolved. And Leitch, in his performance, had done the same thing. "He's camp, and he's probably gay, but maybe he's just a New Romantic," Anders said. 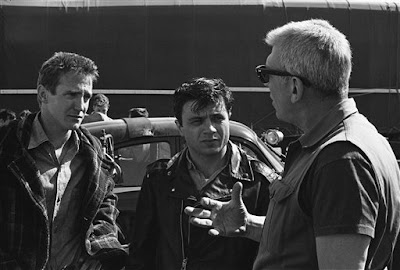 7. Up to scratch
Granger 'aged' the Elvia Rivero footage by scratching it with her stepdad's Victrola. He was Richard Brooks, and it was the one he had used on the set of In Cold Blood. Her parents, incidentally, were two greats of the British screen: the ethereal Jean Simmons, and matinee idol Stewart Granger. 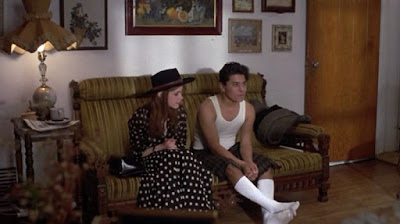 8. Lost in translation
Anders' one regret with the finished film is that she didn't subtitle the Spanish dialogue (though the Rivera sequences were subtitled when it screened on Channel 4, and I have the beaten-up pan-and-scan video to prove it). The reason, apparently, was money, and Anders' concern that audiences weren't used to watching subtitled films. Mascis was particularly disappointed when he saw the completed version, saying that it spoiled the climactic scene between Shade and Javier. 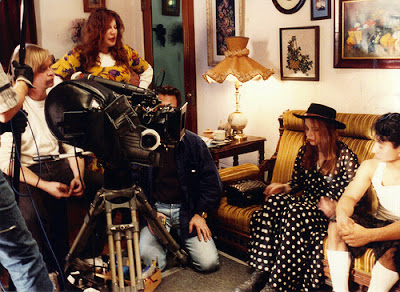 9. Allison's starting to happen
Having studied the French New Wave, German New Cinema and British Free Cinema at UCLA, Anders (top of frame) wanted to be part of a movement "and then I was": the American arthouse scene of the early '90s. She's directed seven features in total, as well as three TV movies, and has directed episodes of The Mentalist, Orange Is the New Black and a certain vapid show about four single women exploring Manhattan's dating scene. Though Anders isn't a big fan of TV, those four Sex and the City episodes keep the money rolling in even now, and have presumably helped her to realise other, more personal, projects. 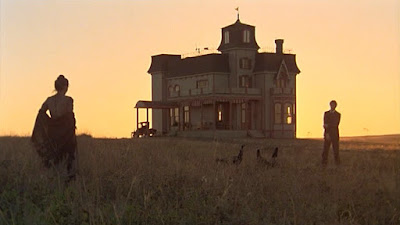 10. Terrence's stamp
An essential 10th insight courtesy of the Telegraph's Tim Robey, who asked Anders about the apparent influence of Terrence Malick's breathtaking Days of Heaven, perhaps the most beautiful colour film ever made, which he'd spotted in Shade's voiceover and the final shot. You're right, said Anders, and it was intentional. 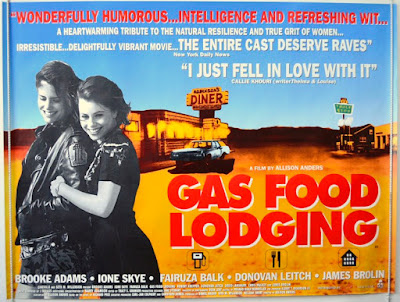 Those are not typos above. After all these years, we FINALLY have an answer on the title. It is not 'Gas Food Lodging' (as in the BFI's programme) or 'Gas, Food, Lodging' as it's frequently written but, erm, 'Gas, Food Lodging' (kudos to IMDb, who have it correct). "We couldn't afford a second comma in the credits," according to Anders, which is NOT an explanation and renders the above poster INACCURATE.

Thanks for reading.
Posted by Rick Burin at 08:21