Mankiewicz, The Shadow Line and the original House of Cards - Reviews #235 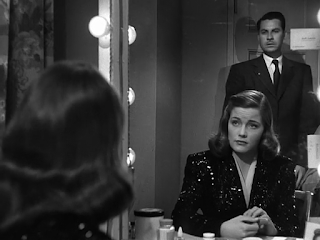 John Hodiak plays an amnesiac war hero searching for a shadowy hoodlum by the name of Larry Cravat, his Third Man-ish investigations bringing him into the orbit of a wry, warm-hearted chanteuse (Nancy Guild), her nice guy suitor (Richard Conte) and a gently omniscient detective (played with great charm by Lloyd Nolan).

There are outstanding self-contained, character-led scenes, including an absolute gem featuring Josephine Hutchinson (a former Warner female lead who never quite made it), fine, unexpected examples of jocular post-modernism – in the shape of meta movie gags about Lugosi, lighting and how detectives behave – and a succession of quite magnificent surprises, right up to the finish.

From the film’s reputation, I was expecting something fairly shabby and perfunctory, but instead got a film that’s impressive, interesting and almost impossible to second-guess. The leads are strictly second-tier, but while Hodiak is fairly bland, the director takes Guild into strong territory (like Hutchinson before her, she was on the cusp of superstardom that never came) – the actress emerging as a sort of Ella Raines-Ronnie Lake hybrid, with a gift for a one-liner – as Nolan and Conte hoover up everything that’s left. (3.5)

See also: I wrote about Mankiewicz's masterpiece, All About Eve, here. 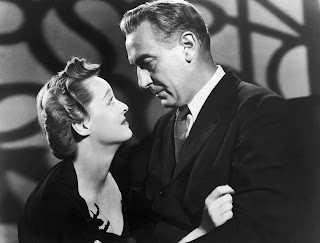 They're even giving great performances in the publicity stills.

Watch on the Rhine (Herman Shumlin and Hal Mohr, 1943) - A talky, grown-up and extremely powerful propaganda piece - from Lillian Hellman, via Dashiell Hammett – about German émigré Paul Lukas, his American wife (Bette Davis) and their three children moving to the States, where they face persecution from a dissolute, amoral Nazi sympathiser (George Coulouris). There’s a false note in the characterisation of the kids, who speak in that generic ‘foreign’ Old Hollywood way (all stilted full sentences), and Beulah Bondi is wasted in a weak part as a French maid, but much of the film is truly great, with perfect performances from Lukas and Davis, and mature, incisive writing that hammers its points across – even while showing the Nazis as cruel, sadistic thugs, rather than the genocidal ethnic cleansers they were soon confirmed to be. (3.5) 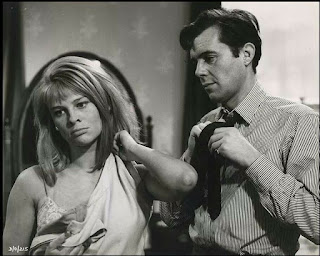 Darling (John Schlesinger, 1965) - A ‘60s time capsule with a European feel about the romantic adventures of capricious British model Julie Christie, who moves through relationships with a TV journalist (Dirk Bogarde), a louche, selfish playboy (Laurence Harvey) and an ageing Italian prince (José Luis de Vilallonga), on her way to partial self-discovery. It’s inconsistent and holds you at arms’ length, but Christie is very good in her Oscar-winning role, and there are some excellent insights and fine lines from Frederick Raphael – who went on to write one of the greatest things I’ve ever seen on TV, the BBC’s novelistic, challenging and brilliant adaptation of his book, The Glittering Prizes. Jim Clark’s editing is also extremely good, full of tricks inspired by the Nouvelle Vague, though the direction from John Schlesinger includes too much that simply feels like padding, particularly a party sequence as incoherent and unfulfilling as the one with which he almost sank Midnight Cowboy. The film’s bagginess and aloofness is compounded by a motivational murkiness and lack of clarity that’s not intentional: it strives to be adult and complex, but comes off as merely unclear, despite Christie’s best efforts. The idea that anybody would go after Harvey while they had Dirk Bogarde at home is also, of course, ridiculous. As you would expect, Harvey is as dreadful as ever. (2.5) 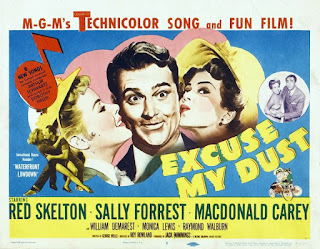 It is only as terrible as this half the time.

Excuse My Dust (Roy Rowland, 1951) - A broad, nostalgic musical-comedy about an aspiring inventor (Red Skelton) at the birth of the automobile revolution. Skelton is as funny as a hernia (and his various car crashes as funny as, well, a car crash), but the Arthur Schwartz-Dorothy Fields songs are good and Monica Lewis puts her numbers across with great gusto, sass and style. I like the hilariously incongruous ballet featuring female lead Sally Forrest too: it's very stylish and well choreographed and confusing. In support, Preston Sturges regulars William Demarest and Raymond Walburn are rather wasted, though Demarest does blow a sort of weird raspberry at one point. In addition, an uncredited Buster Keaton came up with a few of the gags and worked behind the camera (some of the Skelton business is a little better than normal, though he himself is dire), while the star's car was previously seen in Orson Welles' butchered 1942 masterwork, The Magnificent Ambersons, which is where the similarities between the two rather cease. (2)

The Pursuit of Love by Nancy Mitford (1945) – Nancy Mitford’s romantic comedy about the pretty, fickle, impulsive, small-eyed Linda Radlett is a playfully heightened, impeccably-written slice of escapism, laced with insight, understated emotion and dazzling wit, based upon her own life – and her experiences as a member of Britain’s most notorious family. It’s not especially ambitious in terms of scope, but it is magnificently realised, full of brilliantly-drawn characters, sublime running gags and effortlessly turned phrases. The chance to get a tour of Mitford's world and her brain is a rare sort of treat, and despite her rarefied upbringing, there’s a worldiness and a compassion here, allied to a rare intelligence and a matchless, piercing viewpoint, that can’t be missed. The foreword by her sister Decca is hilarious too. (4) 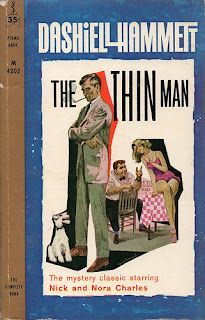 The Thin Man by Dashiell Hammett (1934) – Hammett’s celebrated crime novel is, well, a bit of a damp squib, really. I came to it as a fan of the movie (which came out later the same year, having been shot in just 12 days!), the defining mystery-comedy of its era, and the first time that a modern, happy and equal marriage (at least within the parameters of its period) had been depicted on screen, touched with the alchemic chemistry of stars William Powell and Myrna Loy. All I can say now is that screenwriters Albert Hackett and Frances Goodrich did an incredible job of adapting this book, which is less escapist, more cynical, more repetitive, less funny and conspicuously less fun than the film, consisting chiefly of second-gen Greek immigrant PI Nick Charles saying that he’s not sure who committed a murder, while various dislikeable supporting characters try to either stitch up or have sex with one another. The relationship between Nick and his wife Nora (based on that of Hammett and his long-term partner, Lillian Hellman) isn’t bad, and sometimes the book’s eruptions of violence, drunkenness and cutting sardonism draw you in, but there’s always a long lull just around the corner. A real disappointment. (2)

The House of Cards trilogy: 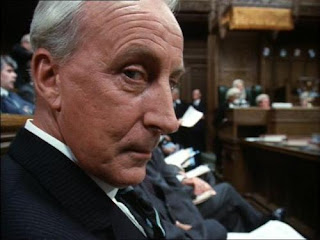 House of Cards (1990) - One of the most exquisite achievements in the history of British TV: a paraphrasing of Macbeth, with a repulsive psycho-sexual undercurrent, about Tory chief whip Francis Urquhart (Ian Richardson), who reacts very poorly to being overlooked in a cabinet reshuffle, and proceeds to destroy everyone in his path to power. Andrew Davies’s script – including those celebrated, conspiratorial fourth-wall-busting asides – the immersive direction, and a pair of sensational performances from Ian Richardson and Susannah Harker (as his mistress and most prized media contact, Mattie Storrin) make it simply unmissable: a dark, daring and delicious satire about an old soul poisoned by avarice, but with a twinkle in his eye. (4)

To Play the King (1993) - An interesting sequel to House of Cards, about Francis Urquhart (Ian Richardson) locking horns with the Prince of Wales (Michael Kitchen), resulting in a constitutional crisis. It’s less novel and more of-its-time than the original, but exceptionally well-written and acted, with an unforgettable climax containing more than a hint of The Godfather Part II. Kitty Aldridge’s performance as Urquhart’s new mistress, Sarah Harding, is emblematic of this sequel’s standing: better than almost any you’ll see on TV, but not in the same league as Susannah Harker’s last time out. Still, I can't help but think that this was a major influence on one of last year's most overrated plays, Charles III, which has an almost identical storyline (though was written in blank verse). (3.5)

The Final Cut (1995) - A very good but nonetheless slightly disappointing conclusion to the House of Cards trilogy, with prime minister Francis Urquhart (Ian Richardson) dealing with revolt and rebellion that threatens to push him out of Number 10. For the most part, it feels more like a cynical political drama than the black satire of House of Cards – while traversing some rather over-familiar ground – and the supporting cast isn’t in the same class as before (Isla Blair and Paul Freeman are simply lightweights compared to Richardson), but it’s still consistently entertaining, with confrontational storytelling, fine dialogue and a flamboyant if conventional pay-off. (3) 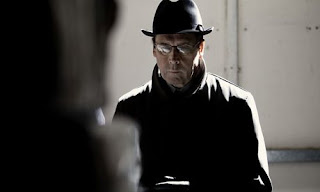 The Shadow Line (Hugo Blick, 2011) - The BBC at its best, a bleakly brilliant mini-series from writer-director-producer Hugo Blick that plunges you into an unexplained, nightmarish and narcotic netherworld, then begins to illuminate and tie up a few threads while leaving others dangling for the longest time. Chiwetel Ejiofor is a cop with a past, Christopher Eccleston a dealer with a heart, Rafe Spall an out-there gangster (whose tics are a thing of joy) and Stephen Rea a tall, quiet mystery man by the name of ‘Gatehouse’. It’s idiosyncratic and almost matchlessly imaginative, with more than an echo of Edge of Darkness (arguably the finest thing the Beeb did in the ‘80s) in its marriage of introspection and action, the latter showcased in a succession of creepy, eerie and ultimately breathtaking set pieces. (4) 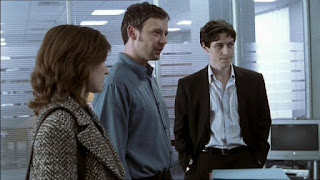 State of Play (David Yates, 2003) - A dazzling drama from the pen of Paul Abbott, about a political scandal that begins to mount after the death of a political researcher, who was having an affair with her boss, up-and-coming MP David Morrissey. As reporters John Simm and Kelly MacDonald begin to investigate, further revelations follow thick and fast, impacting on the livelihoods – and lives – of them all, as well as editor Bill Nighy, a pale, sexy, floppy-haired, cool-as-flip freelancer (James McAvoy), a callow, irritating PR weasel (Marc Warren) and Morrissey’s unhappy, conflicted and opinionated wife (Polly Walker). The meshing of acting styles is simply exhilarating, the direction from future Harry Potter helmer David Yates is swift and immersive, and the writing is absolutely extraordinary: clever, funny, thematically complex but entirely accessible, and eloquently and pointedly personal while operating within a moral morass.

I always remember Abbott telling Charlie Brooker (in a personally inspiring special edition of Screenwipe about how to write) that he would throw in outrageous twists at will, then say to himself: “Write yourself out of that corner, you bastard”, and that gloriously abrasive, unconventional approach works absolute wonders here. It’s only Warren’s subplot that seems a little out-of-place, a cartoonish, relentlessly one-note storyline that occasionally stalls a mini-series of otherwise unstoppable momentum – and magnificence. (Also: Kelly Macdonald is bae, especially her voice.) (4)

Thanks for reading.
Posted by Rick Burin at 13:05