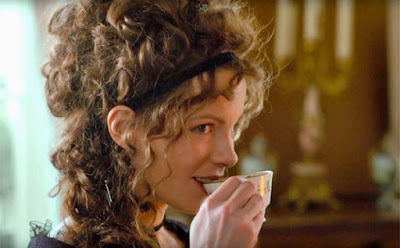 CINEMA: Love & Friendship (Whit Stillman, 2016) - Ah, Whit Stillman. It's so great to have one of America's best ever writer-directors back making movies again, and this one's a wonder. Jane Austen has been an influence since the beginning (his first and greatest movie, Metropolitan, is a rom-com in which love flourishes between two Austen fans), and for his fifth film he's presenting the author's first serious work: an epistolary novella written before her six major works, and only published posthumously.

Adapting it freely enough to humanise its widowed, magnificently selfish anti-heroine (Kate Beckinsale), Stillman retains plenty of Austen's acerbic gags, as Lady Susan plays all those around her off against one another in order to get rich, comfortable and laid. I saw the movie at the Curzon Chelsea yesterday, complete with a post-film Q&A with Stillman and Beckinsale, and the director spoke about how he has tried to revive '20s and '30s tricks lost to the grammar of cinema, like iris-ins and a climactic roll-call of characters, complete with clips. That's not all, though: there's also the spirit of Pre-Code and screwball comedy alive here: the ending is pure Jean Harlow vehicle (with more than a hint of Red-Headed Woman), and the debuting Tom Bennett plays a hilariously and distinctively thick posho who'd be very much at home in, say, Merrily We Live.

Stillman also acknowledged the debt he owes to the 1995 version of Sense and Sensibility (a film he was slated to direct, after Rob Reiner and before eventual choice Ang Lee), and that's apparent throughout: its sets and its cinematography are virtual facsimiles of that earlier classic, which is by far Austen adaptation on the big screen so far, with inventions that even improve upon her novel. The feel of this film is very different though, mirroring its protagonist, who's caustic, brutal and duplicitous, where Emma Thompson's Elinor was gentle, wise and human. Beckinsale's slightly synthetic Hollywood glamour is an odd fit, imported back into a British period setting, but her performance is unexpectedly excellent, particularly her pitch-perfect comic delivery: she grandstands when she needs to, tips a wink to us at times, but often tosses away her barbs in a way that makes them even funnier.

The rest of the cast is great too. Morfydd Clark captures the right balance between childishness and burgeoning self-worth as Lady Susan's daughter, Xavier Samuel is suitably sensuous and endearingly naïve as our anti-heroine's next conquest, and Thick of It regular Justin Edwards exhibits his usual exceptional comic timing, as a singularly agreeable man whose wife (the excellent Emma Greenwell) hates Beckinsale's guts. In the bit parts, James Fleet (who also appeared in Lee's Sense and Sensibility) hits the sweet spot between pomposity, likeability and general impotence, Chloe Sevigny is fun as Beckinsale's American confidante (the pair re-uniting 18 years on from Stillman's Last Days of Disco) and Bennett steals every scene he goes near, as a vastly wealthy idiot with some extremely incorrect preconceptions.

I was incredibly excited when I heard this movie was in the works, and I'm delighted that it didn't disappoint, its short shooting schedule (entirely in Dublin) and small budget nowhere in evidence, except perhaps to lend it the same zippy, breakneck feel as The Thin Man, a film with the same modern, offhand sensibility, and delirious sense of fun. It'll take me another couple of viewings to catch all the gags, and to decide − as with Damsels in Distress − whether it's another Stillman masterpiece, or merely a terrific movie, and I simply can't wait. (4/4)

I also had a very quick chat with Whit Stillman. All my life goals are now completed.
Posted by Rick Burin at 19:59