'This production did something to me' 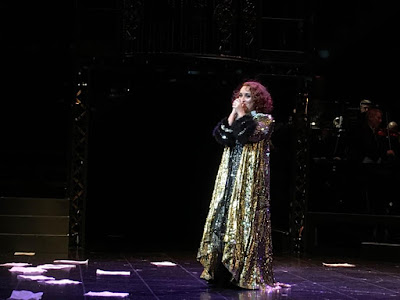 Though I didn’t unequivocally laud the ENO’s production of Sunset Blvd, I did love it – or at least bits of it – intensely. I loved the melodies, the minor explosions of inventively choreographed dance, the pairing of Michael Xavier – playing cynical screenwriter Joe Gillis – and Siobhan Dillon, as his possible lifeline, bright-eyed studio scribe Betty Schaefer. So I went to see it again. The ticket was £105, but that’s exactly how much I’ve made recently from selling old DVDs and books, and one of the three remaining stalls seats was, erm, on the front row.

The one false note for me the first time out was Glenn Close’s former silent siren, Norma Desmond: her voice seemed to be a bit off – at times flat or thin – and her formerly Tony award-winning characterisation was fairly one-dimensional. From last Wednesday to Saturday, including the matinee show that I caught, she was replaced by understudy Ria Jones. And she was very good, with a big voice and an ability to pull a little pathos from the part (an opportunity that Close conspicuously missed), particularly during a scene in which Norma visits Paramount Pictures and an old crew member picks her out with a spotlight. It’s a potentially great moment, but it took Jones’s stoic, wordless and largely internalised emoting to put it across. There aren’t many moments like that in the show, though, as unlike Wilder’s poignant, pungent and ultimately profound satire, it tends to find tragedy in her situation, rather than her character. Here, Norma’s often seen to be acting, not truly suffering, which could make her subsequent nosedive powerfully abrupt or heightened through juxtaposition, but actually just makes it fairly unconvincing. There’s a broadness, a campness in the denouement, and in the play as a whole, that prevents you from truly engaging in her plight. (I also wondered if, as good as she was, the prolonged standing ovation that Jones received was as much about her status as an understudy, and of the audience trying to convince themselves that they had got value for money. There were no refunds offered, while an on-stage ENO functionary took the unusual step of saying that he was "delighted" Jones would be appearing: an ambitious gambit.)

Where it does score is in enveloping Gillis in an unfolding nightmare: a sad and seedy Hollywood evoked with minimal staging and blessed with a beguiling counterpoint: a handful of gloriously escapist scenes featuring Xavier and Gillis. As much as I enjoy the music as a whole, its high-points are unquestionably those two songs: the 'Girl Meets Boy' number that causes their love to bud and blossom, and captures it as it does; and the haunting, exceptionally moving 'Too Much in Love to Care': a soaring evocation of a futile love affair, and one of my favourite songs in musical theatre. The chatty, informal parts of Xavier’s delivery at times rob 'Girl Meets Boy' of some sonically sublime moments, but he has one hell of a voice, and Dillon’s exceptional balladeering carries to the back of the Upper Circle, matched to an utterly appealing performance that gives the play the moral centre it so desperately needs, before proceeding to smash your heart to pieces. When 'Too Much in Love to Care' is fleetingly reprised close to the death, it’s the characterisation here – Xavier’s self-loathing, Dillon’s transformative selflessness – that allows it to land with such devastating results.

The other numbers are good, and given oomph by a 48-piece on-stage orchestra, though I do find the two makeover scenes in Lloyd Webber’s version rather trite and artificial. Staged as they are here, they have no real place in Wilder’s world and come off merely as chick flick fluff, despite the uneasy subtext. Those songs – 'The Lady’s Paying' and 'Eternal Youth Is Worth a Little Suffering' – are also hampered by some weak and clunky couplets that sound like they were dashed off in a few minutes (the rhyming of ‘kosher’ and ‘brochure’ is particularly lousy), though they’re enjoyable enough in themselves, and there’s no faulting the composer’s melodies. The ballads dealing with Norma (from 'With One Look', vocalised by her, to 'The Greatest Star of All', sung by her butler Max) are fine, even show-stopping in their slow, windy, epic way, but they're not exactly my sort of thing.

All in all, though, it’s a fine play and this production – with its heady air of stifling desperation, of bitter, bullet-ridden, waterlogged wisdom, of redemptive love flailing in the face of fate – did something to me. I’ve never been back to see a show a second time, but with this the pull was too strong. Its wry sense of humour, sour celebration of Hollywood narcissicism and enrapturing songs got under my skin. And while it’s not perfect by any stretch, I doubt I’ll see another show this year that affects me so deeply.

Thanks for reading.
Posted by Rick Burin at 18:37