Steve James, Cry Danger and the burning of books - Reviews #228 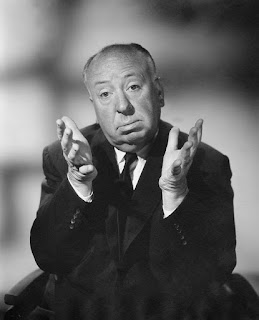 My last post was about Alfred Hitchcock. Here's an 11th fact about him: the worst silent movie inter-title he ever wrote (according to Hitchcock himself) was in Easy Virtue, in which Isabel Jeans's Larita is deluged by photographers outside a courthouse. Spreading her arms, she cries: "Shoot, there's nothing left to kill!" The other 10 things I learnt about Hitchcock are here.

I don't spend many weekends nowadays just watching films, but I did this past weekend. Some reviews for you, ranging from a heartbreaking documentary to a rip-roaring ride. 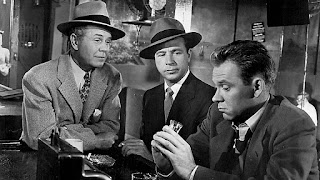 Cry Danger (Robert Parrish, 1951) - One of my favourite noirs: a trim, cynical and brutal film, with insanely good dialogue, an unmatchable LA atmosphere and a great low-key ending.

In the best of his many fine excursions into the genre, Dick Powell (who also directed most of the film uncredited) is Rocky Malloy, who comes out of prison and tries to find out who just cost him five years of his life.

The scenes where he spars one-sidedly with Wiliam Conrad − banging his head on the floor; playing Russian Roulette with him − are superbly nasty, Rhonda Fleming is a fine female lead, and Richard Erdman (Community's Leonard) brings the pathos as Powell's Marine buddy.

A short, sharp shock, and a brilliant one at that, but not without a dark vein of wit leading to its beating heart.

In the whole of film noir, I think there's only one movie I prefer, and that's Out of the Past. (4)

Incidentally, I wrote to Rhonda Fleming about this film in 2011 and she sent me surely the loveliest letter I've ever had from anyone in the movies. 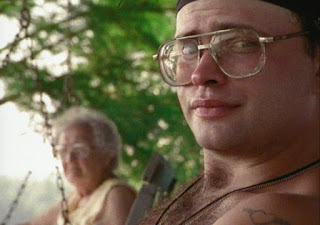 Yes, he is basically Dwight Schrute.

*SOME SPOILERS*
Stevie (Steve James, 2002) - Steve James's first documentary since Hoop Dreams (my favourite of all time) wasn't supposed to turn out like this.

After embarking on a piece about his estranged "little brother" − the damaged kid to whom he'd acted as a mentor while at college − his subject, Stevie Fielding, was charged with raping his own eight-year-old cousin.

This harrowing profile examines the circumstances that shaped Stevie: how he was beaten by his mother, raped by people at his foster home, and then successively abandoned by anybody to whom he forged close ties.

As a portrait of a thick, poor, rural guy charged with a horrific crime, filmed across several years, it reminded me a lot of Making a Murderer, and it's just as upsetting and compelling, though in this case there's no ghoulishness yet little doubt that he's guilty, so the point of the movie is not to weigh up the evidence (or to dwell endlessly on it), but to try to understand what went so very, very badly wrong.

Atypically, James inserts himself into this story (something he didn't do in Hoop Dreams or The Interrupters), but that makes perfect sense in the context, and his balancing of different viewpoints, integration of expert testimony (via Stevie's mental health case files) and completely unsensational treatment make it a tough but extremely valuable watch, full of insights but without trite or simplistic psychology.

Incidentally, Patricia, the old schoolfriend of Stevie's fiancée whom they stay with in Chicago, is my absolute hero. (3.5) 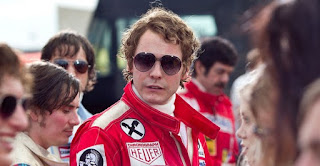 Howard’s film occasionally stalls when allowing bit part players to utter stock platitudes, hurling us out of the story, but for the most part it’s a dizzying combination of thrill ride and compelling character drama, that makes you care – really care – about a pair of toffs who drive too fast for a living.

Writer Peter Morgan offers us that strong if formulaic adversarial narrative he does so well, the visual tics take you to the heart of the action in exhilarating style, and there’s some absolutely exquisite lip-pursing from Brühl. It's also nice to see Christian McKay on cinema screens again: his last scene of note is a little gem. 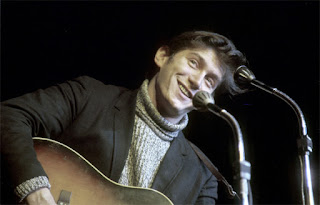 Phil Ochs: There But for Fortune (Kenneth Bowser, 2011) - A heartfelt, brilliantly edited documentary about the magnificent '60s protest singer Phil Ochs, who helped give a voice to a generation, while suffering the innumerable setbacks of his generation, flirting periodically with performance art, and wrestling with the manic depression that ultimately killed him at 35.

I first heard him when I was a teenager, after Thea Gilmore covered his signature song, When I'm Gone, at the Manchester Academy, and I've been a fan ever since, even if the ripped-from-the-headlines nature of much of his music makes it a lot more dated than Dylan's (his contemporary, friend and rival).

In this tender but by no means rose-tinted portrait, he comes across a mass of contradictions: a socialist patriot who went to military school and idolised Kennedy, an egomaniac who wrote the definitive song of the anti-Vietnam movement, appeared at every left-leaning benefit he was ever asked to, and spent his free time in foreign bordellos.

Seen on stage or heard in voiceover, he's an extraordinarily clear-eyed and intelligent commentator on his times, brilliantly lampooning the absurdity of government policy, bitterly acknowledging the canniness of his opposition and displaying a greater understanding of how to connect with the working man than almost any of his contemporaries.

By the end, having fall in love with him, you watch him fall to pieces, a bloated, alcoholic wreck in rectangular shades, babbling about conspiracies on a street corner.

It's impossible to do justice to a life as full (and as full of triumphs and sorrows) as his in just an hour and 36 minutes, whilst mapping out the social and political changes that shaped Ochs and allowed him to flourish, but this impressive film gives it a good go, with insightful contributions from his family and friends (plus Jello Biafra and Christopher Hitchens!), perfectly chosen clips and a near-constant soundtrack of remarkable music. (3) 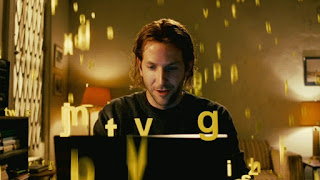 Limitless (Neil Burger, 2011) - What would you do if you had unlimited brainpower? "I would get a haircut and becomes a stockbroker, then maybe a politician" − Bradley Cooper in this film. What a staggeringly limited amount of ambition.

This was quite fun while I was watching it, but it didn't amount to much. The trick photography with the continuous zoom was fucking ace, though. (2.5) 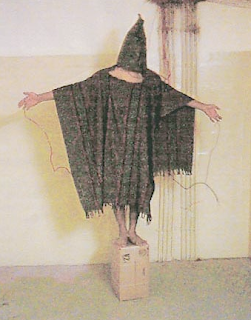 You can stand there until you stop shrugging.

Standard Operating Procedure (Errol Morris, 2008) - Errol Morris's documentary takes you vividly inside the hellhole that was Iraq's Abu Ghraib prison − through interviews, reconstruction and those unfortunately iconic pictures of detainees being tortured by US soldiers − but it has almost no answers, or even suggestions.

Maybe it's just too big and difficult a topic to tackle, even for one of cinema's great documentarians. He underlines the almost arbitrary definitions of torture used by the US military, but fails to hold anyone to account. The result is a very sad, frustrating film; its 'highlight' − if there is such a thing − the testimony of the apparently gentle, sweet-natured Sabrina Harman, whose complicity in the abuse, whether partial or otherwise, is chilling to comprehend.

Morris's brilliant command of that narrative shows that his powers have merely come up against something insurmountable, not deserted him entirely. (2.5) 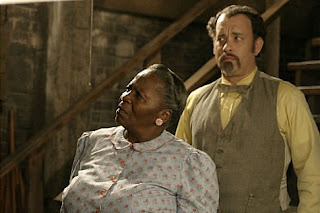 The Ladykillers (Joel and Ethan Coen, 2004) - The Coens' worst film by some considerable distance − the main problem: it's not funny. I'm not a big fan of the Ealing original, but it's a fair bit better than this childish, cartoonish Southern misfire, in which loquacious 'professor' Tom Hanks moves his gang of misfits into the basement of an old house so they can knock off the casino next door. The catch: his new landlady is a slightly batty old woman (Irma P. Hall), who keeps getting in the way. I only laughed twice. Marlon Wayans shouts endlessly. The gospel soundtrack and a neat PoV American Football game are among its few virtues. (1.5) 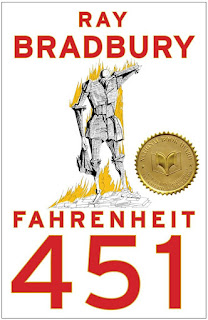 Fahrenheit 451 by Ray Bradbury (1954) - Bradbury’s vision of a dystopian world in which books are banned feels a little clichéd now, and never quite lives up to the literary promise of its opening (his economical, gently experimental prose style quickly becoming repetitive), but it offers a solid story with a strong anti-conformity message, a selection of breakneck twists and a simply perfect final page. And as much as it’s a heavyhanded book, with a hero whose job as a “fireman” is to burn books, houses and the people inside them, the atmosphere surrounding that lifestyle is immaculately rendered, while there are also moments of deft, deceptively astute satire, including the stat’s claim that the first “fireman” was Benjamin Franklin. It’s curious how much of a fool Bradbury decided to make his hero, Guy Montag, his erratic, childish behaviour frequently commented on by other characters: perhaps the author’s point is simply that a world this stifling would create men ill-equipped to offer resistance; perhaps it was merely the demands of plotting. I don’t read much sci-fi – aside from Vonnegut – but this stark, admirably unsentimental book didn’t seem big or bold or ultimately coherent enough to justify its exalted reputation, while its equation of nature with moral purity had been done to death, even then. Its treatment of the printed word is alternately pretentious and profound. (3)

Thanks for reading.
Posted by Rick Burin at 07:41