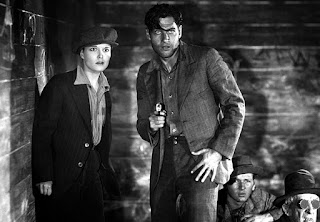 A grim but intoxicating silent wonder from William Wellman, with a rough-and-ready storyline, Louise Brooks' best American performance and a first 45 minutes of almost perpetual motion, as our heroine kills an attempted rapist, dresses as a bloke and then hops freights with hobo Richard Arlen, trying to shake the "dicks" on their tail (stop sniggering).

Wellman made most of the best movies about trains and though Wild Boys of the Road remains one of the finest - and most violent - Pre-Code movies around, he never bettered the stunning, rolling, juddering, smoking, dangerous, desperate, hypnotic and free, wonderfully free evocation of the rails that he achieves here.

It's the backdrop to a timeless story of love and another of redemption, as sleazy, hulking, kind-of-cool hobo Oklahoma Red (Wallace Beery, giving the performance of his life) sees the lengths that the fugitives will go to for one another, and decides that maybe he should stop being a bastard. As 'the girl', Louise Brooks is modern, touching, beguiling, sexy, sweet, unaffected and quite outrageously steely.

There are grace notes aplenty, good gags, smooth but breathless tracking shots that take you to the heart of action, love scenes of refreshing originality - including a beaut in a haystack - and the bloodiest meet cute of all time, followed immediately by a frankly staggering murder montage that recalls (or anticipates) Abel Gance at his best.

I saw it, at long last, at my office, with astonishing, apposite accompaniment from Neil Brand and the Dodge Brothers that added immeasurably to every scene: a rollicking, raucous, nuanced soundtrack bursting with energy and emotion. If you ever get the chance to experience that: leap. Leap like a hobo going for the last freight to freedom. (4)

Thanks for reading.
Posted by Rick Burin at 07:46