A handful of new reviews. 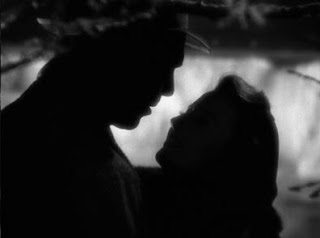 *MINOR SPOILERS*
Remember the Night (Mitchell Leisen, 1940) - I watched this on the big screen for the first time last night. It’s still the greatest movie I’ve seen: a witty, knockabout Preston Sturges comedy (his last script before becoming a director) that slips gently into an extraordinarily powerful articulation of romantic love: romantic love as both the saviour of and ultimate threat to family, career and existence itself.

Fred MacMurray is an assistant D.A. brought in to win a case against shoplifter Barbara Stanwyck. After forcing her case to be postponed till after the festive season (leaving her in the clink over Christmas), he has an attack of conscience and gets her bailed out, and soon they’re travelling to their home state of Indiana together, as their frosty relationship begins to thaw.

Combining Sturges’ comic smarts and sly sentimentalism with the lushness of director Mitchell Leisen’s visual vision, it’s a heady concoction in which the imagery – a Gothic, lamplit house; shooting through streamers at a New Year barn-dance; silhouettes against Niagara Falls – perfectly complements the action, in which each of the supporting players (Beulah Bondi, Elizabeth Patterson, Sterling Holloway) has one truly great scene with which to comprehensively nail their character, and in which Stanwyck exhibits the most refined strain of that incandescent, beguiling sensitivity that for a short time made her the most important actor on the American screen.

Incredibly, MacMurray matches her every step of the way, the pair generating an intense chemistry of which most screen couples can barely dream – no wonder they were re-teamed for Double Indemnity, many film fans’ contender for the title of Best Noir Ever Made (I’m more of an Out of the Past man, myself).

Every time I watch it, I find something new to make me laugh or cry. Here it was MacMurray’s petulant cry of “Those jurors are gabbing again” (laugh), as he takes an unusual approach to the climactic court case. And then there are all the elements that reward time and again: former lawyer Willard Robertson as a ridiculously OTT defense attorney; Stanwyck and MacMurray’s meeting in the apartment, her very genuine sardonism put to great use; the running gag about her defence of ‘hypnosis’; her heartstopping “You bet”, when he tells her he’s a lucky man to have the family he does, huh; the musical interlude in the parlour; Patterson’s line about her engagement; the moment when it dawns on you that Sturges is preaching on the malleability of human behaviour, one of my pet themes; and the night-time chat between Bondi and Stanwyck – a raw, captivating, unusually mature and effortlessly judged piece of cinema. And then there is the denouement, a Niagara Falls/courtroom one-two that sees Sturges take every duplicitous restriction of the Hays Code and work it in his favour, as only he could.

There’s a black valet who’s a bit thick, a running joke about Sterling Holloway yodelling and an oft-maligned hair bow for Stanwyck, and you’re welcome to sneer, smirk or raise alarm at them all you want, but - for me - everything that happened in cinema up to Remember the Night was just a rehearsal, and nothing that’s happened since has been half as good. (4)

See also: I wrote about my other nine favourite films here. 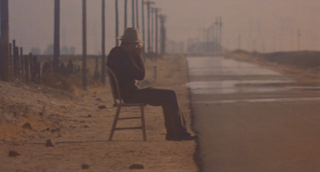 Bound for Glory (Hal Ashby, 1976) - A brilliant – and for the most part brilliantly unconventional – biopic of the legendary protest singer Woody Guthrie, which until its final 30 provides no stock storytelling, no obvious Hollywood moments and no real antagonists aside from the system itself, just the man with his great flaws and virtues, and a succession of episodes within a spellbinding evocation of Depression-era America, in all its grim beauty and despair.

The cinematography by the late, ludicrously great Haskell Wexler is as stunning as any you will ever see – the plains and valleys Guthrie wrote about, the Dust Bowl too – the editing by Ashby (one of the finest in cinema) is predictably astute and inspired, and, asked to carry the piece, Carradine is utterly authentic as Woody, underplaying at almost every turn. Supporting actors turn up for a while, then disappear, as characters will in the life of an itinerant, itchy-footed drifter, and though Randy Quaid’s role is a bit too obvious, ushering in a more schematic denouement than might be welcome, the ensemble does its job well, adding to the film’s hefty cumulative impact.

Slow, meditative and shot through with anger and a painterly poeticism, it’s something like The Grapes of Wrath, filtered through Altman’s Thieves Like Us, and if it doesn’t necessarily bother with the facts, it does get at an important truth about Woody and his work: that he was a man shaped by his times, and by the overtness and extremity of human suffering there, but that his legacy was as someone who spoke truth to power, whose personal failings paled alongside the immensity of his message, and who used the tools he had to make the world a fairer place. (4) 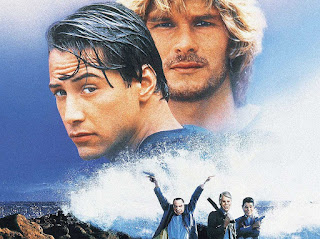 Point Break (Kathryn Bigelow, 1991) - This high-octane, New Age actioner is easy to mock but even easier to enjoy, with FBI agent Keanu Reeves going undercover in a group of bank-robbing surfers as he tries to get his man (Patrick Swayze). Arguably in more ways than one – despite an unconvincing subplot featuring an androgynous Lori Petty, it’s quite possibly the gayest film I’ve ever seen, with the Reeves-Swayze interplay making the beach montage in Rocky III look like Battleship Potemkin.

Yes, there’s more cheese than you can shake a cracker at and Reeves’ line-readings are abysmal, but it’s a distinctive, original movie with dialogue that’s just stylised enough not to be embarrassing, an atmosphere of heightened, sunlit Zen homoeroticism, and a succession of adrenalised action scenes from Bigelow that are nothing short of astounding. Our hero’s pursuit of a bank robber dressed as Ronald Reagan at the midway point, shot largely as PoV, is one of the most frenetic, immediate and masterfully-filmed chase sequences I have ever seen. (3) 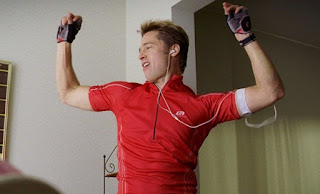 There's quite a bit of this sort of thing.

Burn After Reading (Joel and Ethan Coen, 2008) - A disposable Coens film about adulterous adults and how the missing memoir of CIA analyst John Malkovich (catchphrase: “What the fuck?!”) impacts on their lives, leading to extortion, blackmail and murder. Beginning as a cartoonish black comedy, it balances its stories well and generates some tense moments as it segues into a thriller, but it’s rarely funny and ultimately means nothing – a problem it seeks to alleviate through overt acknowledgement, with little success. It’s ultimately just a spiteful assault on most of its characters (see also: A Serious Man, one of the more troubling films of recent years), though the scene in which Clooney rings his wife and then confronts the mystery man who’s tailing him is – for all its nastiness – an interesting, intelligent and telling vignette.

Thanks for reading.
Posted by Rick Burin at 07:40